Romero’s rules are definitely good ones to go by; I never really noticed the part about how the ceiling and floor textures changing at different heights (not exclusively at least), since my focus in-game is not on that but on the action the crosshair is pointed at. I do notice, time and again however, the texture separation segments as aforementioned.

I did break one rule, the looping rule since one can either grab the blue card and head straight for the larger lift, wham, bam, done, or jump into the vent, and grab a few things extra, including more frags and a preview of the very small DM area (which has a secret that remains in-game untagged as such and Wad Author’s documentation does not help at all with that), and if one skipped the blue card, there’s one amongst the computers (which one has to get since there is a blue door down there too that blocks off the other lift).

With a .bex script, I figured out how to change the in-map overlay map names (among other things), but the endoom screens are another issue; those remain unaltered.

I’m glad to be helpful. I hope these videos can give you some great inspiration. Speaking of which, here’s some for you from first time mappers:

Anyway, here’s some screenshots from Borderlands 2:

Somescreen shots I took while partaking in the World Of Trucks Christmas Wise Giving Event 2020.

Immortals Fenyx Rising is one hell of a game. I am actually surprised it is this fun and this endearing. I’m playing with the language set to French (English kinda bores me lol) and it makes the experience so much more engaging. I’m gonna switch around languages, test em all, but I think its gonna be hard to beat the French VAs.

Immortals Fenyx Rising is one hell of a game.

I am super interested in this game, would love to hear more detailed feedback as you play more or when you conclude.

I am super interested in this game, would love to hear more detailed feedback as you play more or when you conclude.

I don’t know if I’m any good at reviews, but the only thing I think it is really missing is more interaction with the NPCs. The combat is really intuitive and fun to go through. It’s no Dark Souls, but in ways I feel like it is a lot more fleshed out than even Valhalla and Odyssey. The story is quite engaging, and the comedic twists help lighten the mood a lot.

It might be easier to ask me questions about the game, since I have no idea how to write it down in a more articulate way. lol

Honestly, it feels like it was definitely inspired by Breath of the Wild a bit, but I feel like that’s a great injustice to the game, to say it is a clown like so many have. The artistic style is really the only thing that is so similar, everything else feels like late Assassin’s Creed met with some minor “gimmicks” of numerous other Ubisoft titles, blended in a neat way so its not annoying (like it was inBoTW ).

I’ve seen the cover art; the main protag looks like a flat chested femme to me (this is fine).

I’ve seen a lot of people making comparisons to LoZ. Okay, sure; I wouldn’t know so I just sit back and watch the squabble.

Dark Souls? What game is this?

Dark Souls? What game is this?

the most tell-tale part is the HUD.

or the fact the picture is called Yakuza victory.jpg

Heir of Fire as far as i remember from DS3 is YOU THE PLAYER so i guess you as a protagonist of Yakuza 0 got your ass kicked? Haha ? Not sure.

Yakuza 0 is harder than DS3 ? ( which on Hard is actually true as i have experienced myself ) .

No… no you can clearly see my healthbar in the shot there.

Alright lets dissect this frog.
Heir of fire destroyed is indeed from DS3 it is the victory message when you defeat any boss who isn’t a lord of cinder, for those it says “Lord of cinder fallen”. Failure just says “You died”.

Anyway, Yakuza and Dark souls have one curious similarity, they both use Xp as currency, though in Yakuza you have actual currency serve as Xp. You get Yen/souls from fighting people and then you use yen/souls to improve yourself. In dark souls you of course lose your souls when you die which you normally do not in Yakuza, with one interesting exception; Mr Shakedown.

Yakuza has this one special enemy spawn who will upon hitting you siphon some money away from you and if you’re beaten by him you lose everything you’ve got on you. You can get it back if fight and beat him again.

Now I had spent some time in this game focusing on investment strategies and Mahjong but not spent much money on actually improving my character, relying on my own skills to handle most fights. However Mr. Shakedown would easily kill me in 2 hits, and a single combo move once he reached a rage state due to my low stats. I had spent most of chapter 5 just avoiding him right up to the point where I was ready to progress the chapter and I turned a corner and accidentally ran right into him.

Now I don’t think I absolutely HAD to get that money back but it felt like a lose thread to leave and he’s so damn smug when he beats you I just had to take him down. So I set up a save point where I could easily fight him and just did that over and over until I could get a largely flawless fight. So a friend of mine suggested I’m treating him like a dark souls boss. Half a week later I succeeds and decided to make the image in question to announce it to him and he’d completely forgotten that discussion.

I really like how well I managed to get the message fade in over the screenshot though so, gaze upon my Gimp prowess! … and brawler style mastery I suppose.

Well, congrats on smashing down a jerkwad of a bossfight.

I did not look at the name of the image file; I usually don’t unless I right-click and ‘open image in new tab’ (and only do this when I intend to save the image), though sometimes the site is configured to run a tooltip with the image name that pops up and then I’ll see that (that’s not a function here). I also do not know the Yakuza games that well.

I’ve been having some fun with Audiosurf.

Some screenshots from The Witcher: Enhanced Edition with the mods I’ve installed:

BTW, if you want the game to look that good you can follow the guide below: 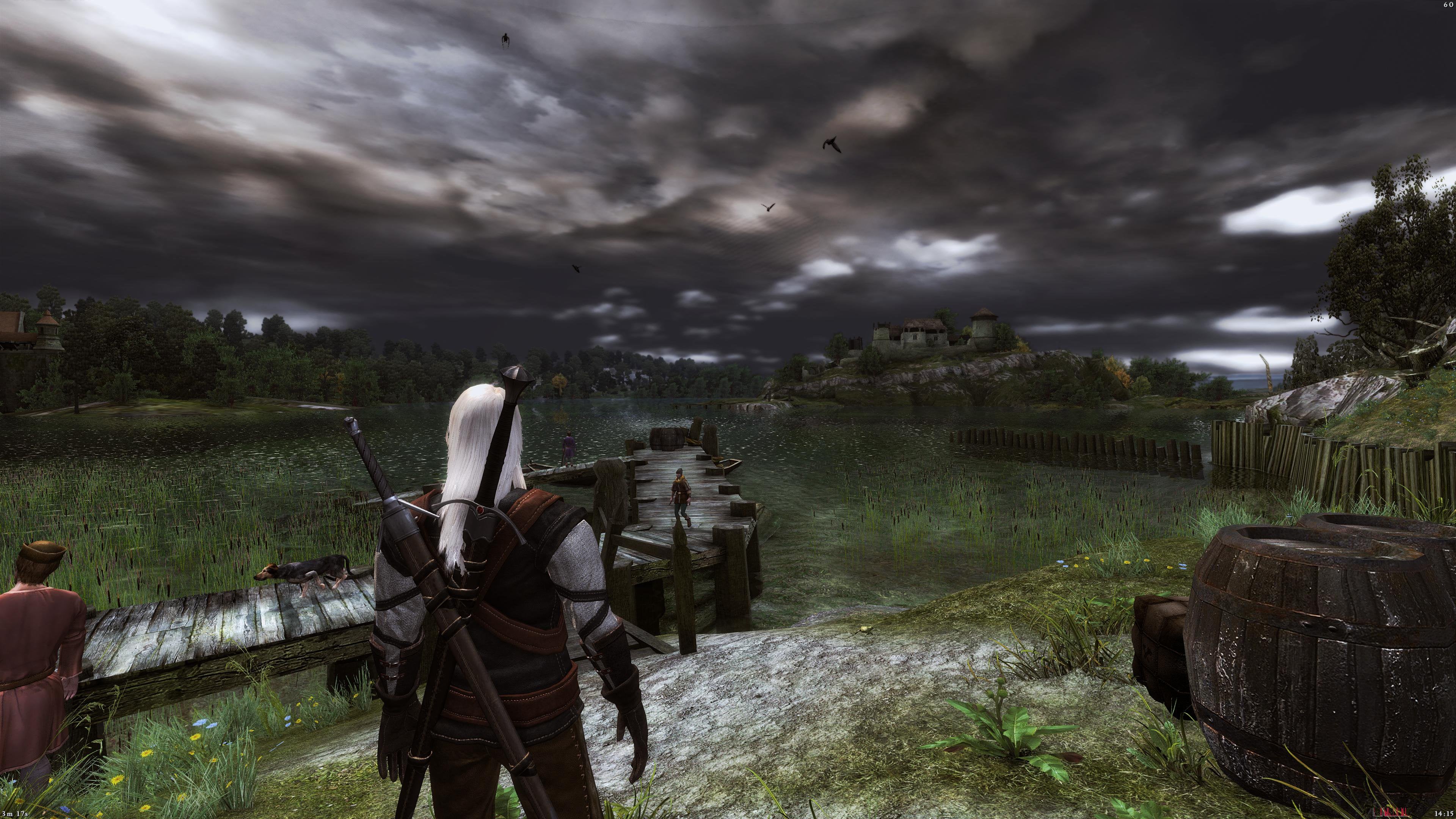 Even in gator-infested waters, there’s still time for B E A N S

And here is my horse casually levitating