Buff Back Giveaway: Game 15 in session

well this is interesting, seems that both are correct, @Luxen am i wrong?

It could also be Manic Dance, but I think that’s less likely so

just in case i was right, i forego and disqualify myself, wasnt after a game to begin with but like the challenge

panic dance? are we allowed to guess like this?

There’s no rule against it in this round, though if it had been wrong then there would have been a penalty for each wrong letter.

Congrats, you both guessed the correct password!
I have no idea if you both sent your guesses at the exact same moment or if there was a microsecond discrepancy, but either way you’ve both earned a prize for your efforts.

Please send me your desired prize via PM and I’ll send it to you shortly after.

The truck comes to a screeching halt and the people within it are safe at last.
Look’s like Sizzle’s off to solve another mystery.

their answer literally appeared at the same time as mine, and like i said, i withdraw

their answer literally appeared at the same time as mine, and like i said, i withdraw

Ah, I missed that message.
Thanks for letting me know.

What a fun ride! Thanks for the game @Luxen and congrats to @M00 as we found the answer together

Dice seem to be pretty popular around here, so the next game is… a board game!
It’s nothing complicated, really. 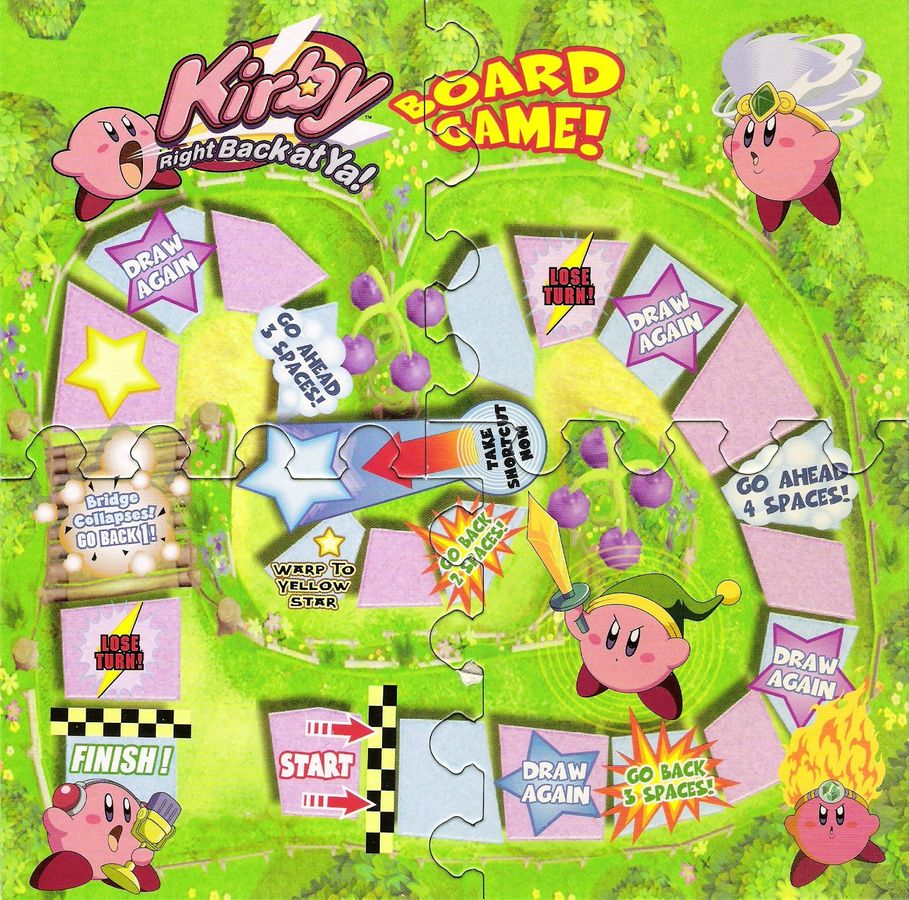 This is a board game that was loosely based around the Kirby anime that used to air on Fox Kids/4Kids years ago, which was localized as Kirby: Right Back At Ya! (originally titled as Hoshi no Kirby in Japan). It was available in Wendy’s Kids Meals while the show was being aired, alongside many other toys. (Unfortunately, I only managed to get the board game at the time.)

Normally, the game is restricted to 4 players and movement is based on the card that you pick from the top of the deck during your turn, which ranged from 1-5 (each number had a different amount of cards available) and a single Lose Your Turn! card. Since that doesn’t translate well to Chrono’s dice system, the rules will be slightly different.

I’ll start off the game now.

Congrats, you haven’t left the starting block yet.

Congrats, you haven’t left the starting block yet.

Yay me.
This is what often happened to me in Mario Party 4 on Toad’s Board…
I can’t even move until a player who’s interested in one of the prizes joins in.

Alright, strong starts here. Spinning our wheels at the line.

Oh we just keep going, Not waiting for any more participants?
I think I’ll hold off for a moment while discobot gets over this 3 phase.

Yeah, that’s the gist of it.
As stated in the rules, the minimum amount of players needed is 2 (ie. GM + participant).

Clearly Discobot must be drunk atm.
Someone needs to sober him up.