Ban the person above you. Bonus points for relevant ban reasons or incredibly original or creative thinking.

You’re banned because you want people to ban other people, not cool!

I am gonna be gone for about 5 hours or more. Try not to wreck the place.

You’re banned for not banning Pete.

WAIT, IT’S DIFFERENT FOR ME, DON’T–

You have been self-banned… above mentioned reasons.

Well then… I’m banning myself. I’m out.

Banned for reminding me of M. Night Shyamalan, which in turn reminded me of that Avatar movie that DOESN’T EXIST, which in turn made me feel very sad.

You are banned for not feeding the sloths! 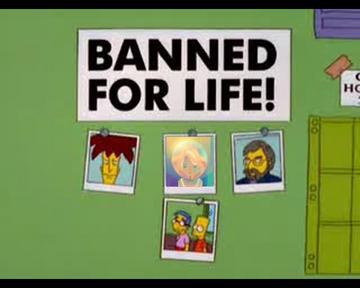 @Enki Your’e banned because no one mentioned anything about sloths or feeding them, that’s just laming.

@coralinecastell are banned for one of 2 reasons, because the movie you mentioned does exist and therefore you are lying and also for getting the name of the movie wrong. “Avatar” is a movie directed by James Cameron (the one with the alien species the Na’vi), the movie from M. Night Shyamalan is called “The Last Airbender”, “Avatar: The Legend of Ang” and maybe “Avatar: The Last Airbender” but never just “Avatar”.

edit: Also ban evasion as you were banned once already!

@Fraggles Banned for failing to prepare your ban reasons in advance. Moderation actions must be explained in the original post.

@Punkster You’re in a banned!

Banned for lying straight up in your username.

banned for misinterpreting usernames on purpose

I want to take this chance to ban absolutely nobody. I’m the champ and i’ll do whatever i want.