Been listening to a lot of soundtracks while pushing paperwork at work. So here’s currently playing as I am rifling through a bunch of documents that need to be reviewed:

Given the trying times right now this song popped into my head. No real reason really.


If there’s something I can say, at least since we are at the bottom things can only look up; we understand a little bit better on how the disease works, have a morbid but important reminder to keep our hygiene clean (something which I am guilty of avoiding constantly) and maybe stand together in spite of different upbringings and cultures and such.
For now all we can do is support those in need, maybe by donating or just spreading the word. I’m going to end it off this way: if it gets too overbearing to watch or listen, take a break. It’s good to understand what’s happening around us but also we have to have a level head in order to fully understand and symphatise on what is going on. I don’t know if I’m even talking off topic anymore but that’s just how it has been for me anyway.
spinoute 2020-06-02 10:59:25 UTC #1688

In the last weeks I’ve been catching up on MCU movies. The last one I saw was Doctor Strange in 2017 and then never watched another one.

So, going by order of release I recently watched:

While I enjoyed them as a whole, I cannot help myself from feeling bummed by how many jokes these movies have. I mean, I don’t mind jokes, but some of these moves have them at every 5 min. It’s very distracting. Some jokes are so out of place that ruin moments, some have no fun at all, some just are there to lose time. Why is this?

Does anybody feel the same? That they exaggerate on the jokes?

Other than that, they’re fun movies to watch, but they’re also full of plot holes.

Seeing how all the characters came together in the grand finale of Endgame was really cool and it was a nice conclusion for the majority of stories up to that point.

Oh I get that. To me the MCU isn’t always the best in terms of humour. Although they way I see it is a part of their identity, after all they’re fundamentally fun summer blockbusters, so put in some action, comedy and cool characters and call it a day. Though I, or most people, don’t go and watch the MCU for the humour mainly, unless it’s the Guardians movies or Thor Ragnarok. If you want great humour there are much better alternatives from their years anyway. I don’t find it very distracting anyhow as I do like them alright but I can see why people are bummed out on it. Not helping cases are those movies that hop on too closely to mimic Marvel and fail miserably (sub par flashy action, unresolved set ups and crappy humour).
And honestly Doctor Strange was not a really good movie, barring the visuals. If that were my last Marvel movie, I might’ve lost interest in the universe. Hell I didn’t like Civil War because the conflict felt inconsequential and easily resolved despite the good intentions. If it wasn’t for Black Panther I would’ve been jaded from it entirely.
Sorry to vent especially if you folks like Civil War, it’s just how I felt watching it.

While I liked Civil War (but Winter Soldier is still my fav Cap movie), the problem I had with it is how in the end everything was in the right place so the villain could pull his reveal.

As for the jokes, like I said I don’t mind them if they’re done right. Do them on the right moments, not when they’re arguing about this massive threat to the universe and somehow they start talking about ice cream in the middle of it.

I should clarify I was talking about the movie Black Panther not the character himself in Civil War as I didn’t find him interesting there.

And Fallout radio in the background.

I don’t post much because I feel I have nothing much to add, I’m shy, an introvert, and I have a hard time talking to people, even on screen.

I love birds, in fact I love almost all animals with the exception of snakes. It’s not their fault, its because I was abused with snakes as a child by so called christians. That’s all I have to say about that.

At one time I had thirteen rescue birds that I gave forever homes to. Like me all had been terribly abused and also like me, they all had PTSD. All but one of them has gone to the Rainbow Bridge to wait for me to join them there.

This is Baylers, the last of the bunch, he is a total GOB - Gorgeous Orange Bird, a sun conure:

This sweet little guy was hatched in our basement in April 2005, Twittles is a hybrid (think mule)

In this picture he is maybe 2 months old?

This article of what birds you can hear in New York was wonderful for both me and the birds. If you’re able to hear birds due to there being less people out and about, but unable to identify which ones are making the sound this might help: 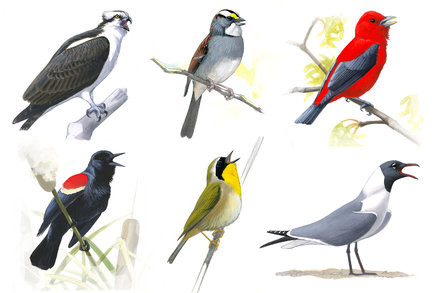 When the pandemic collided with the spring migration, the sounds of the city changed overnight.

Here is a Free app that identifies bird and their sounds here: Bird ID Wizard—Step-by-step Answer three simple questions about a bird you are trying to identify and Merlin will come up with a list of possible matches. Merlin offers quick identification help for all levels of bird watchers to learn about the...

to see wild birds like Eagles, Ospreys, and other Endangered Species raise birds from egg laying to fledgling.

They also have bird feeders in different parts of the world set up for watching.

Hopefully this is not too boring and there is someone else here who likes birds as well.

As for what I’m reading - I read with my ears due to vision problems:

I’m reading a series of books by James Sallis:

Yesterday I finished the latest book by Joseph Finder: House on Fire.

As for watching, I don’t. Except for Animal Crossing: New Horizon which I find not as addictive as some people say, but more than I would like.

I am not into decorating, I’ve never been a house *itch, I’ve been more of an outdoorsy person, as long as my home was clean and functional I was fine. In ACNH you earn miles & rewards on decorating your house, the landscape etc., and I’m finding it more difficult that what most females do from asking around.

I skipped that class in creation and took up auto mechanics, shop, weapons and things like that because hey, that’s where all the men were.

If you’ve made it this far, thanks for reading and please be safe.

Remember that there is NO Justice, until we ALL have equal Justice.

Nice to meet ya

I’m reading Snowcrash again, mostly while I sit and poop because I haven’t well-structured actual reading time into my adulting life yet to make reading a more dignified experience.

Also reading a mushroom book by the mycologist Paul Stamets and a book about how to bake bread.

Watching? A lot of live streams and discussion about the protests, riots, murders, beatings, etc. Heavily invested in Laowhy86 on YouTube for his ongoing coverage of what’s happening in China. The Tienanmen square vigil, that should be happening tomorrow, is not going to happen officially because the CCP is cracking down hard on humanity and freedoms.

I hope the CCP burns this year.

Been jamming some funk lately

From a DeNiro movie, A Bronx Tale

I honestly could listen to this all of the time. I really love how it all ties in so well.

Played Helltaker for a bit the other day and this track has ingrained itself into my brain which now craves it daily for greatly prolonged periods of time.