even if the end results are essentially the same lol.

nono, don’t get me wrong, like i said about vr; “in the future”
the difference from the two is that VR has maybe potential
whereas 3d film, just straight up, has to finally die out, right now. (i’m tired of still trying to get ripped of at the movies for X titles lol

Ahhh, I see - and kind of agree. Especially on the 3D film thing.

As for VR, I used to watch Star Trek TNG as a kid and was always really fascinated by the holodeck idea. With the room scale tracking you get from Vive / Rift, it sounded like something I could finally sort of try. (I’ve taken a wander around the USS Enterprise including the bridge and, amusingly, the holodeck and then I went & stood on the surface of Mars and physically walked up to and inspected the mars rover in full scale, all mapped from NASA data and images, all right in my own living room thanks to VR)

But again, I see your point, we really and truly are in 1st Generation territory with the tech. I love it for what it is, but am even more excited by where it could go and fully agree that for it to be fit for mainstream it needs to be better and cheaper… and by quite a margin on both ideally

Edit to add; if anyone was curious about the USS Enterprise thing, its awesome in VR but also comes in a flat screened version. Its a WIP but its still pretty damn good if you’re a fan (and its free): http://stage-9.co.uk/

I’m not a fan of 3D movies myself. everyone always wants the 3d show but after 5-10 minutes I get accustomed to it and it’s wasted on me.

VR has a lot of potential but so far I haven’t seen enough of what I would call quality titles to even consider buying into it. Most of what I see that looks interesting can be played through my current setup.

Hotdogs, horseshoes and hand grenades, Arizona sunshine, gorn and elite dangerous just to name a few. It’s expensive but there are amazing AAA titles for VR

Shouldn’t there be an option called “I have VR and it sucks, or it’s overrated, or I regret getting it, or it’s not worth it yet, or whatever”?

Cuz here the only option for someone who has VR is to say it’s the greatest thing ever.

Like @Gnuffi said, I tried to add options…but after 5 mins you can’t unless you involve a mod. It’s my first poll, so hopefully, I get better…

P.S.No hope for me…I voted and hit the wrong button on my own poll…Oh vey! I DO NOT have VR! LOL!

Hotdogs, horseshoes and hand grenades, Arizona sunshine, gorn and elite dangerous just to name a few. It’s expensive but there are amazing AAA titles for VR

I’m not saying there’s nothing of quality out there for VR, I’m saying for myself, what’s out there doesn’t warrant the cost of a VR setup yet.

I do own a VR and feel I would love it but since I got it I have played a few games and it just sat there after that, its not that I don’t like the games, I want to play it but just don’t.
I have noticed a few dizzy sessions after a while but that’s not any reason for me not to play it.
I don’t regret getting it but maybe I jumped on the boat too early to enjoy it.

I played some minigame on a PS4 VR thing once and it’s just so cool omg, even the VR stuff for the Gear VR was fun, if it wouldn’t cost a grand to get going I’d already be playing a lot lol (oh and if the gear VR wouldn’t make my face all sweaty

I’m very much looking forward to see how the VR tech is going to advance, but I’m not about to jump on it any time soon. I suffered car sickness as a child and still having troubles with doing anything but looking at the road ahead as an adult and I suffer simulation sickness still from some low FOV games I can’t imagine I’d take to the current VR generation of headsets very well.

I don’t know how they will eventually solve the simulation sickness issue, current ‘solutions’ are kind of pointless workarounds. Most common seems to be to force you to be stationary and teleport around nodes instead of having free first person movement. I think that kind of ruins the whole idea. Then only remains using it for a tiny selection of games with cockpits, racing and flight/space sims. While I’m sure those games are amazing in VR it’s quite a niche selection of games for such a significant investment.

I have high hopes for it but it has some rather significant issues to iron out before it’s really a viable product.

You’re all free to wait. As it stands, everything looks pretty stupid by design-- have you seen those Moose Antle-- AH BU UM Wireless Adapters for the Vive?

Basically, I think between Oculus/Vive competition and SteamVR/Oculus Home presence, I think VR is here to stay now. You’ll always have access to these, especially on Steam’s side. Not to mention, there’s not much we can improve with the tracking other than streamlined future models. From now on, nearly every upgrade is going to be in weight/comfort (which was already on solid ground, at least for Oculus) and resolution.

Basically, even without that Vega I foolishly bought as my one purchase opportunity before BitCoin screwed the GPU market, my underspec hardware is performing quite nicely in the majority of games. Once you tweak things around, there’s very few things I can’t handle… and most of those are on Unity running like crap, not me.

More than anything, I have to say that no other device made itself worthwhile so quickly. I’m already feeling like I got what I paid for with Summer of Rift just with Robo Recall (as much as I hate Epic for closing Paragon…), Pavlov, H3VR, Superhot VR, and BAM. I’m also really looking forward to playing the Serious Sam remakes, it seems more natural than the original game and any game with touchpad/joystick locomotion wins in my book.

That’s not the true VR champion though… 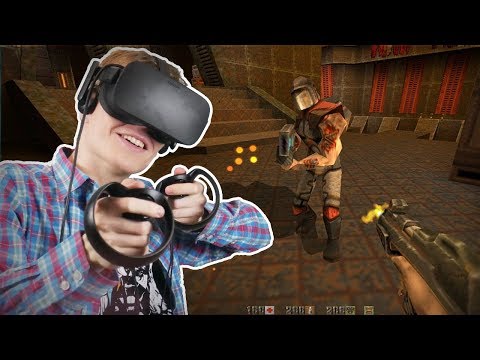 This is probably the greatest VR port of all time. Seeing this absolutely brilliant open-source project just makes me even more annoyed by the fact that Bethesda managed to basically botch every aspect of their own Doom VR release.

I picked up my own Oculus after Summer of Rift got extended, but I was lucky enough to sample VR on a Samsung GearVR. It had some framerate issues with Minecraft and Quake 1 [Darkplaces] ports (and 60Hz + latency instead of 90Hz), but overall I still had a great time with it. I dabbled with hacking together a RiftCat setup for a while, but after constant detection issues with games I just got the real thing while it was on sale.

From now on, nearly every upgrade is going to be in weight/comfort (which was already on solid ground, at least for Oculus) and resolution.

I don’t think so. The largest and most significant “upgrade” for VR is going to be on the software side, that’s likely where the issue with simulation sickness is going to have to be tackled. Though to a certain extent adaptation of the hardware to be more wide screened and offer more peripheral vision would probably also help but that’d be a pretty big hardware change.

Another important thing they still have not fully dealt with, as far as I’m aware, is the issue with people who needs glasses. From a comfort standpoint of simply wearing both glasses and the headset that would require some re-engineering of the entire thing. Other options of making the headset purchasable with prescription lenses to start with comes with it’s own problems of course, some have suggested software solutions but I have no idea how that’d even work. Easiest might just be using contacts I suppose, but I’ve never tried them myself and would prefer not to.

As long as whatever being displayed is hitting 90fps (in both screens, hence the need for beefy hardware to run it) it eliminates sickness for those that wouldn’t generally suffer it under other circumstances and makes it so slight that even those with minor issues can handle it. Its a common thing to ‘find your VR legs’ and get used to any issues for many. Its when it dips below 90fps that it becomes really nausea inducing. There are many people, myself included, who never experienced any sickness in the first place (and my fave game actually includes backflips. Seriously). The software is there already. Every current user wants better resolution and more comfort over any issues there, as increased frame rate means more expensive tech, while we’re already hitting that 90fps golden standard.

There are already headsets on the way with massively increased field of view (google Pimax. Looks chuffing rediculous but its like strapping an IMAX to your face)

As for the glasses, I’m not sure about the Rift, but the Vive can be adjusted easily to increase the space between the screens and your face and will comfortably fit standard glasses inside by design. Many people do exactly that. Prescription contacts are also an option as you pointed out, as well as 3rd party ‘inserts’ that can slot in and take prescription lenses. So that aspect has not been overlooked.

Source: Over 15 months of Vive ownership and daily visits to the Vive subreddit (90,000+ members) and the Steam VR Facebook group (over 20,000 members (and its not the biggest)).

Ugandan Knuckles will be the peak of VR, from now on is downhill, my friend.

This is currently the only type of VR I would like to try, not sure if anyone here plays pool/snooker or follows this, but Ronnie O’Sullivan is a great player and this is a pretty good display of the uses of VR, in my opinion.

I was about to comment on the lack of mark of the ninja.

You are in the right way man, I’ve got a VR headset and i can’t use it a lot because there aren’t many REAL titles but when i play it I have a lot of fun with it. I think if videogame brands try to do more big games for VR sets, VR will be the future.

Sorry to bump an old thread but i tried out VR at my school now that i found out we have VR rooms for students to use. This was my first ever experience with VR. We have the Oculus Rift.

I was very impressed with it. I jumped off a cliff in VR and almost fell down in real life. Today i put together a 4-cylinder engine in Wrench and visited Mars in Mars Odyssey. In the first session, i played the mandatory First Contact which blew me away. I wish my school had more apps (read that as games) to play than what they have now (hint: Job Simulator).

I don’t have the spending money to consider a VR set but i know that i want one at some point. However, i’m worried about long-term effects on health. Surely it can’t be good for the eyes, brain, and balance.