I noticed carvalho20ptc last night. couldn’t figure out why, so I figured it was an inside joke. remembering what today was helped me understand.

I also hope you enjoyed my new avatar on Steam, heh.

I wonder what it looks like when you are mowing it.

What do you say @BlivetWidget?

Probably not quite so enthusiastic!

Now you can even buy games with ARP!

Woah, huge changes. Hopefully it is a good thing but we shall see.

Edit: I wonder how much redeemable ARP I will have after the conversion since no more levels, should be interesting.

After 12 years, Alienware Arena will be departing from its current leveling system and replacing it with a simple five tier system. Tiers are based on your lifetime ARP and will be utilized primarily for gating exclusive rewards for veteran members.

When i first read this I thought what does games have to do with American senior citizens?

ARP= American Retired Persons(Actually, it’s AARP. But this is how my brain is working now a days.)

AARP is the nation's largest nonprofit, nonpartisan organization dedicated to empowering Americans 50 and older to choose how they live as they age.

I think after the update some of the alienware arena vets may retire.

As long as your post is the last one in the thread, you can just edit it and the thread will still get bumped.

Women tackling decisions men should have made years ago. I do miss Merkel though.

Be careful with those Steam Scams! Especially those labeled “I accidentally reported you”.

r/SteamScams - So someone tried to steal my account on Steam with the "I...

Last night on 4/17/2022, as I was playing LEGO Indiana Jones: The Original Adventures on Steam, a guy by the name of ArthurBlue sent me some messages as seen below. 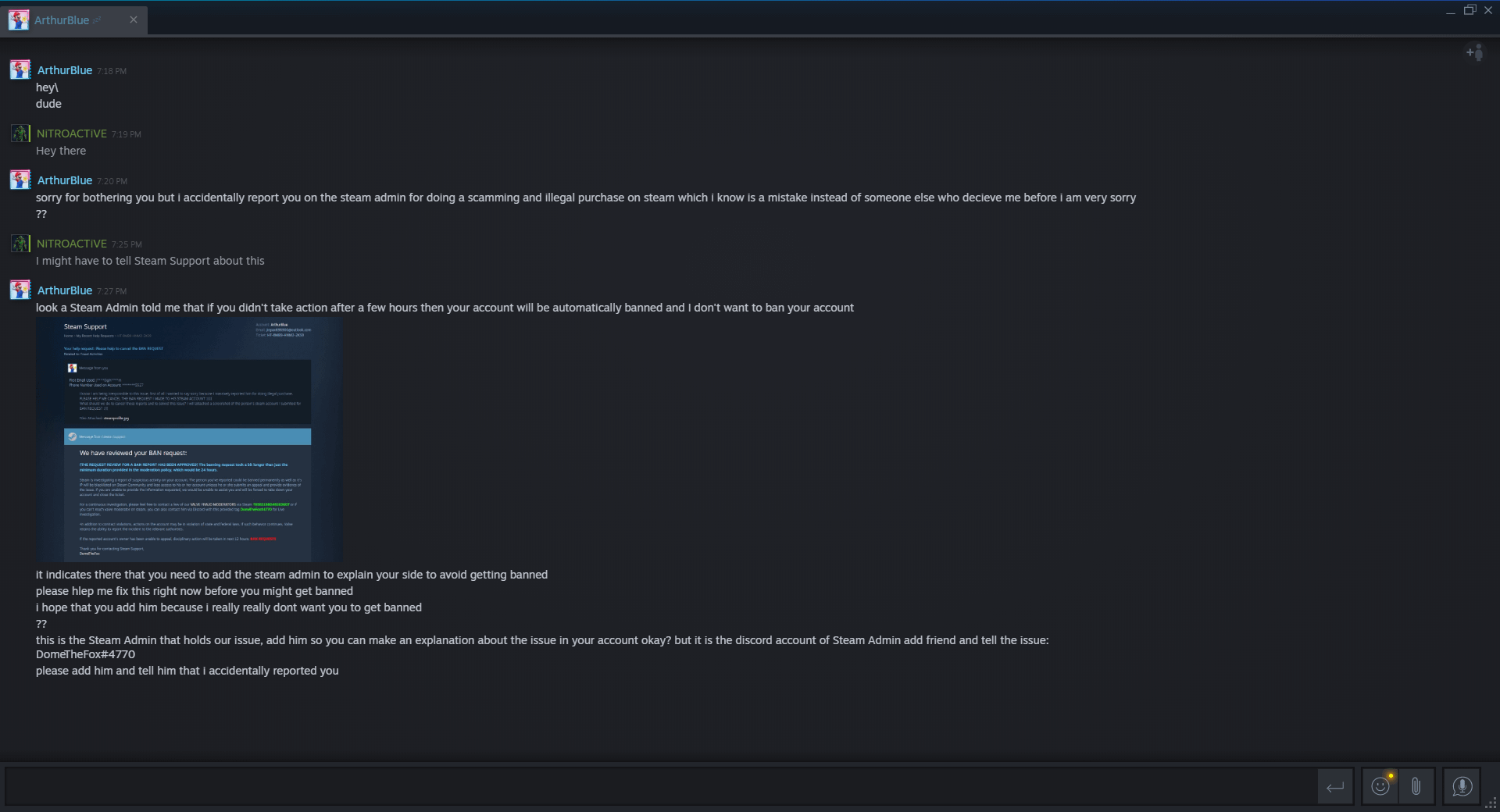 The chat ArthurBlue had with me.

As you can see, they claimed that they accidently reported me on Steam. They also asked me to add some guy named DomeTheFox, who is said to work at Steam. They also sent me an image, which can be seen below. 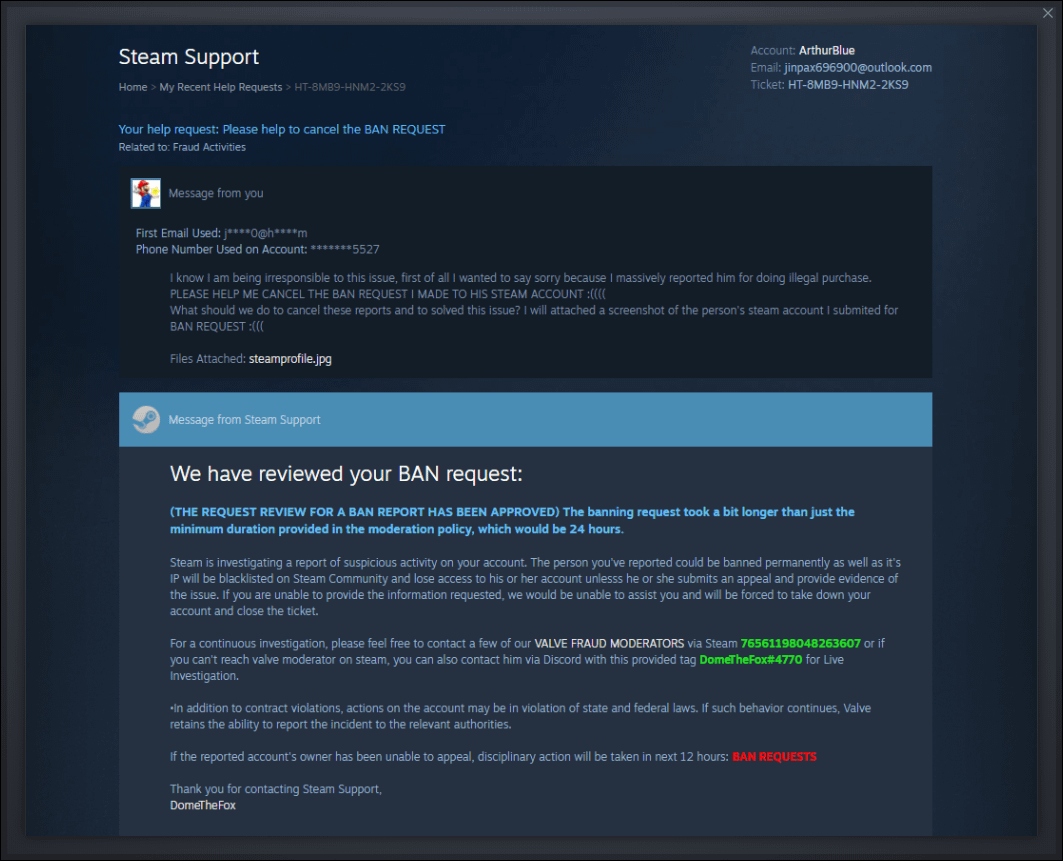 The image they sent me that shows the so called “ban request”.

I decided to do some digging around, and I found this article on the “I accidently reported you” scam, and thank god I did some research before doing what this guy asked because I wasn’t aware of that type of scam before.

With even more research, I found this Reddit post in this same subreddit. The post happens to mention a guy named DomeTheFox too, and the message that user posted was pretty much the same, only it was from a different account. The tag number from DomeTheFox was different, but I’m sure it’s the same guy.

After doing some digging around, I decided to send ArthurBlue the link to that article and that Reddit post, and asked them to explain all of that. I even told them I would actually contact Steam support through the Steam application itself instead of that guy from Discord. Sometime afterwards, the internet went out at my place for a bit, and when I came back on, guess what happened? ArthurBlue unfriended me on Steam. Big shock, am I right?

Earlier today, an actual Steam employee replied to a Steam help request, as I attached the same images as seen in this post here, and surprise surprise, they told me it was often the start of a scam, so it’s a good thing I didn’t fall for that, especially how I have over 300 games on my account.

I don’t remember when I added ArthurBlue on Steam, but I remember that they had over 40 games on their account. As of today, that account doesn’t seem to exist anymore. There’s a chance that the “ArthurBlue” who contacted me last night wasn’t the account’s original owner, so if that’s true, I sure hope the original account owner can get their account back somehow.

So yeah, thank god I didn’t fall for that scam.

WOW! Thanks for the heads up, @carvalho20ptc

We actually had this happen on the Nexus Discord about a year ago as well, so be aware its happening on other platforms as well.

Interestingly looking in the top right of the Steam Support picture the details are:

Which is not only exposed, but aslo different from the ‘First Email Used’ in the message.
Which could still be legitimate if someone changed email etc. But seems suspicious.