Hey guys! Do you still remember that one game from your childhood that you really liked, but can’t remember the name of it? Just little bits here and there?
That’s exactly how i’m with this one dos game i played about 18 or so years ago…
I figured that this is a place as good as any, so here I go. Does this ring a bell for any of you?

Basically it was a topdown view mech shooter, where you had to get to the end of the stage. I found a couple similar ones, but in this one when your mech got destroyed, you simply got out and could still fight, BUT you could take over your enemy’s mech that was damaged in the fight.

I know this isn’t much as far as descriptions go, but that’s as far as i can remember. At best i get to play a game from my childhood, at ”worst”, we get to see some old mech games.

I have two such titles myself, one of which I have managed to find. Fallen Haven old turn based tactical game that fascinated me greatly a long time ago. Another which I THINK was named dogs of war but that title has been used by too many things since so I can’t find it. It was a top down shooter in very grey corridors. You’d get weapon drops from defeated enemies that I think had an ammo limit. It is not the amiga title from 1989 with that name.

As far as your mech title is concerned I’m afraid I can’t help. Was it a generic mech thing or was it part of the Battletech or mechwarrior franchises? Certain it was a DOS title and not possibly nes/snes?

I am certain that it was a dos game, since we used to play it on my uncle’s pc with my cousins

the closest looking game i could ever find was Future Cop L.A.P.D. , but it doesn’t have the mech switching mechanic (different mechs had different attacks)
Also i think it was generic. From a quick glance Battletech doesn’t resemble it, and it certainly isn’t a Mechwarrior title.

Not a dos game, but a really old one nonetheless. Before torrents were a really big thing,in my country at least, we used some sort of proxy server thing that let others copy stuff from your PC as long as you marked it’s folder as shareable in the network, and you yourself were online. I remember find some sort of racing game in one of the music folders I got from somebody.

I don’t remember it’s name, though I THINK there was a 2 at the end of it. You started off racing dune buggies on some sort of desert planet competing in a tournament. Using the currency you won you could buy better and better buggies and then eventually you moved on to space racing ships. The ships got progressively faster and more responsive as you went on.

I had a steering wheel at the time, though it was a cheap one, so while it had a lot of buttons, it only had max left and max right when using the wheel itself (so it didn’t matter if you turned the wheel 2 cm to the left or all the way through, it was the same input). Why this mattered was that with the endgame ships, I couldn’t play with the wheel anymore, and had to use the d-pad on it (the last ship in particular had such a tight turning radius with the wheel that it spun in a circle half again as wide as the ship itself, it was THAT ridiculous). Regardless of that, for a few years I had loads of fun with it, but for the life of me I can’t remember what that game was named.

The problem is that i really don’t remember the details. But i’d say that it was isometric 3rd person. Could be a win95-98 game now that i think about it… Can’t remember the OS for the life of me, but it’s that era of gaming, late 90’s.

The dune buggy game sounds interesting… Would’ve loved it i’m sure, might still do

Hey there, @Hammerfall. I can’t personally be of much help since I was never big on isometric mech shooters… although I do adore '90s games.

With that said, I sill have suggestions. Do you have a Reddit account? There’s a really handy subreddit for things like this called Tip of My Tongue – or TOMT, for short. Eventually, that led to the creation of Tip of My Joystick – you guessed it, same drill but for games! They might be able to lend you a hand there! Addionally, I recently found an answer to a story my father had been looking for for years on Stack Exchange, so maybe ask for help on the Arqade, their gaming section?

Not to say, by any means, that people on Chrono wouldn’t be able to help you. It’s just that those are bigger communities, so you might want to seek help wherever you can get it!

Just for kicks though, see if the answer you are looking for is in any of these places:

Additionally, there are these two huge threads you can give a shot and post on:

a) Old Games you remember playing but can’t remember the name of. - The Escapist

b) The “Can’t remember the name of this game” Thread v3.0 - Giant Bomb

Whew! Hope this helps, in any way. Good luck.

I’ll keep an eye out for this thread to be notified of when you find it.

Edit: I also found this.

I posted in one of the related topics about my first game, it was Dangerous Dave and I had searched for the name for years until I finally found. Here’s the website that helped me find it, also made me remember a bunch of other old games. Maybe it will help you also.

Yeah I looked one by one :v

I have an old presumably dos game that I played at a friends house when I was a kid that I’ve been unable to find.
It was a platformer with a little mage guy (the usual big hat and whatnot) and as I recall it wasn’t very good but I would still like to find it. I’ve looked for it plenty of times over the years and almost feel like I’ve made it up.

@Truly See if it’s this one:

@coralinecastell It’s not, the one I had in mind is more cartoonish and I believe it all took place inside with gray castle walls. I like the look of that game though it reminds me of Trine with the pretty forest, I might give it a try. Thanks.

Nope, I have played Hocus Pocus before though and it’s a much better game than the one I remember.

Could it be Lurid Land? 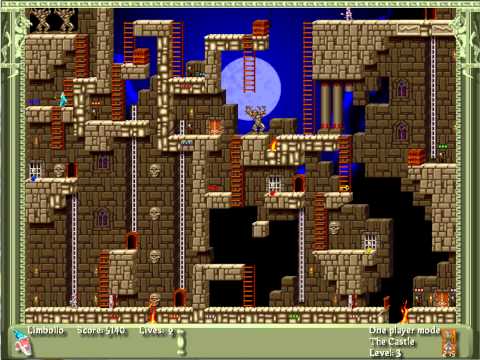 Nope that also looks interesting though.

The player character was more chibi-ish than any of these games. It looked a bit more squished like the Final Fantasy black mage, at least in my very hazy unreliable memory.

Thanks again guys for helping out! At the moment i don’t have that much time to look, but when i’m off work after thursday, i’ll check in with each option

Another one i’ve been looking up the past years in december is a game where you play as santa and have to deliver presents to (colorcoded) houses (blue present to blue house, etc…) but there is a reindeer/krampus going around a map that you have to run away from. You can put down the presents (again, limited number if i remember) to block the path next to you, so i’ve always locked in an area thanks to the old pathfinding and up-down-left-right movement…

That one i don’t think i’ll find, and it doesn’t really matter, just thought that i’d share

It wasn’t Solomon’s Key by any chance?

It wasn’t but that’s another good game.

Im searching for a Game with the mechanic you Tell, the one that allows you to take control of the enemy damaged mech, but i think our games are diferent, bcs the Game that im searching its more a top down game than a 3rd isometric, but just in case i Will say some details i remember from my Game, the mechs or some of them had a spider’ish form, kind like a protoss dragoon from Starcraft, the first level had an egyptian style and the first enemy was a Green spider’ish mech, which you have to fight without a mech, It was like the level where you learn the mechanic.
Another detail is that the diferent mechs had diferent colours, and diferen skills i think, so you can distinguish them.
And the last detail i remember is that the final level or some of them had this mechanic where you have to find the exit of the level bcs the hole place is gonna blow Up, you have a timer.
I think the Game was more a 2D than a 3D.
Lastly i want to apologize for my english xD , im peruvian, and a Game that represents well the mechanic where you take the enemy mech is a game from super Nintendo called Metal Warriors, amazing Game btw, cheers.

Do you remember the platform you played it with? PS1, Windows, Flash, Mobile, SNES, etc? Maybe also when you played, 10 ~ 20 years ago or something.

I’m not huge into mech games, but I always like to help.