Temperatures where you are? 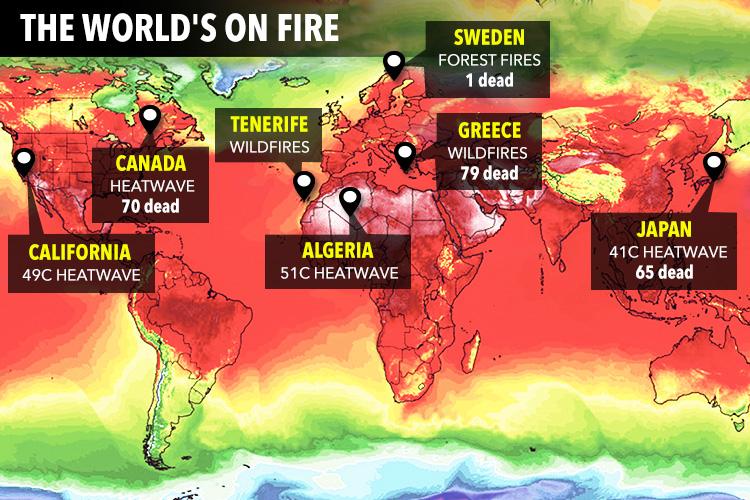 It seems that the heatwave we’re experiencing here in good ol’ Blighty is a phenomenon that’s being echoed across the northern hemisphere, as well as elsewhere across the globe. Fires in Greece (and I believe Sweden), insane temperatures in Japan, Algeria and California…the sustained nature of the heat is something that’s difficult to cope with effectively. In fact on the news this morning they were predicting heat related deaths to increase threefold here.

How is everyone coping? Are you making sure that you get your older relatives to keep hydrated and out of the sun? Have you abandoned gaming because it’s just too hot?(who needs a hot GPU adding to the problem?) Air conditioning isn’t hugely prevalent over here, on average we see around 156 days of rain a year, so most people are just sweltering and that’s part of the reason I recently switched to my old PS3 backlog…a console creates much less heat! I’m staring lovingly at my PC games but it’s too hot!

How are you finding the weather at the moment? What are you doing to cope?

I’m not doing very well to be honest. I’ve switched to be almost entirely nocturnal over the past month or so, though that’s getting hard to maintain too. Ended up just heading to bed around noonish as the heat starts to climb and wake up in the evening after it’s set.

The biggest worry however is not the heat alone but the draught we’re experiencing almost across the board. We’ve barely had 3 days of light rain since April around here and this is undoubtedly going to have a negative impact on harvests likely in all of Europe. Food is not going to be cheap this year.

29C, sunny. A beautiful day, really. I’m not even using AC. August will be hotter for sure, as usual, maybe around 40C.

Food is not going to be cheap this year.

I hadn’t even considered the water implications in that respect. What with Brexit the UK is already on red alert with fears about stocking up and creating food and medicine reserves, so this is bad news. Our water system is old and inefficient, with frequent leaks and just like everyone else we rely on the established climate to cover the cracks.

Where in the world are you @WikiTora?

BTW, it’s almost 12:00, so temps are bound to rise. But it’s been a tame summer for now. I’ve been doing a lot of work outside the house these past days and I haven’t suffered too much.

Oh, did you know that here in Italy, August 15th is a State holiday called Ferragosto? Literally Iron August, it’s usually the hottest day of the year. Do you folks have something similar to us lazy bums?

i’ve never done well with heat, sorta; i feel like i’m dying just when reaching low 20s
so when it’s now 30C, “in the shade”/indoors, with all windows and doors open, because there’s also no freakin wind moving in my area, really makes it hell atm for me
already had 2 days of being unwell/“dizzy”/nauseated, + had 1 fan die on me, -then having to order another (thankful it’s not burned out

)
being outside or on the beach feels impossible for me atm (unless i’d be submerged in the water 100% of of the time), and have resorted to my homemade cooling system of spritzing/damping myself with water and just letting the fans blow on me as much as they can, it’s a strange cycle/sight to behold i’m sure

right now my freezer feels like my best friend, the amount of ice-“chips” it’s pumping out

oh and “we” got our first “large” fire yesterday too, -which apparently might go “under ground” because of how it works when a fire spreads to a peat bog?

sooo, yea… this year’s summer is definitely something compared to the usual

Oh damn, a peat bog caught fire?
That’s pretty bad news, those can keep burning for years and release massive amounts of carbon into the atmosphere. Denmark better get in on some serious carbon emission trading.

Currently my temperatures are reading 42C outdoors and 27 indoors. I’m going to bed!

Any other Brazil kiddos burning their bums on this heat?!

BTW here in São Paulo, on top of roasting flames of evil, it’s also polluted af so it’s like warm from pollution and then there is WIND and when it winds it’s like COLD and then in the sun it’s like COOKING and the asphalt is doing that thing where you see the heat coming off of it if you look closely and it hasn’t rained in like two months preventing me from going out on my regular runs and

IT WAS SUPPOSED TO BE WINTER

It’s around 34°C here in Sweden, at least in my town. Still about 10 degrees more than my body was made for.

Current forecast, actually cooling down a bit. The last week has been 40-43C. In the city on asphalt it was 47C around my car the other day.

It has cooled off a bit in the last couple of weeks, before that it had been unbearable.

Today’s high is only 30 C, fortunately, yesterday and the day before we had some heavy rains… (Last night I was driving home from work and the heavy rains made it impossible to see the road. I almost hydroplaned a couple of times. I slowed down significantly after that…)

Boy I look forward to going back to work next week. Full black clothes while welding will be awesome.

Maybe if you hold the weld points together in the sun and look at them angrily that might work instead?

(that’s right I use Fahrenheit)

next you’ll tell me you’re using thumbs and your feet to measure distance ?

, the absence of rains is wiping me too .-, the air is very dry, and fire by the roadside is becoming a common landscape

(If by chance someone wants Celsius / Fahrenheit just reverse the process, subtracting 28 and then dividing by 2), if you are wondering why I have this, it´s because some physics teachers that I did, not let me use calculators at the time I was going to take a test, nor did they put the formula to make conversions… I do not even need to say that physics is not one of my favorite subjects

Maybe I should switch to Celsius, but with @Agetime,s Fahrenheit Celsius converter, tip thing. I won’t need to

And if we use that conversion, we are going to have a whole Agetime temperature system…