Not sure how I feel about this… having other players trample through your farm and stuff… Could be good, could be bad…

EDIT:
This is part of the multiplayer update too…

It’s not willy nilly dude, it’s like u with a friend who u give access to or whatever

Well, Steam “Friends” are kind of like that facebook account, you know, with friends, frienemies, and people you haven’t seen in 10 yrs, etc… Fortunately almost all of my Steam friends are from here, so that makes it easier.

bye bye fortnite , now all teachers are gonna confiscate kids switches to stop them from growing carrots during class…

to stop them from growing carrots during class…

Did someone just say carrots?

Well, I haven’t taken care of the farm in quite a long time, I am sure everything’s been petrified by now… If you dig deep enough, you might find oil…

I’ve craved this for ages and still need it badly!

I have this game, but I haven’t started it up yet.

I saw this video, and I’m intimidated. 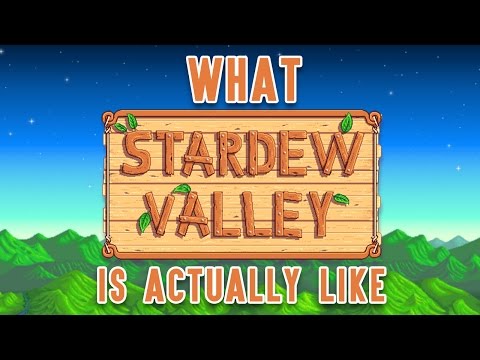 I saw this video, and I’m intimidated.

It is a game that takes up as much of your time as you wish… and often it is time consuming for sure. If you played any Harvest Moon games, for me the first was on SNES, I have been a big fan of the genre. There’s just so much to do in the game…

Agreed! even thou I haven’t played since I got it… but it’s a great game, good to chill out with.

hahaha this is pretty great, thanks for sharing.

On a more serious note, I never got pulled into Stardew Valley that much. I have less than 10 hours in it, I think. I started playing, it was fun, but then I felt it became just… so overwhelming.

I felt the same thing when playing Slime Rancher.

I wanted to find someone who relates to this but I can’t even explain. I guess I’m just so busy all the time doing things in RL that I can’t quite cope with the slightly but nonetheless ever-present feeling of having to do things and be productive in-game in order to push things onward.

Dunno if that even makes sense but yeah.

I checked out my old farm and had forgotten about all the fucked up things I’ve done. See I first married Penny (she’s great btw) but then I wanted to give Abigail a try so I went to the witch and removed all Penny’s memories of me and our 2 kids. After that I married Abigail but I wanted to try some other stuff after that so I left her but immediately regretted it so at the point I last stopped I was trying to win Abigail over again… I think… or Emily maybe. At some point everyone was my girl/boyfriend, that’s when you know you’ve made it.
Man Stardew is wild! Build your very own harem and occasionally farm if you’re into that stuff.

then I felt it became just… so overwhelming.

For sure, depending on other things going on in life, you know… You can’t be tending the virtual farm when the real house is crumbling, the lights flickering, the rain causing a massive flood, etc… Or if you only have an hour a day and you really REALLY want to only play Battlerite…

and then one day the FBI raided the farm

I don’t think I know anyone I’d trust to share the responsibility of running a farmstead with. Everyone seem to think this is some sort of relaxing casual affair where you can just faff about doing whatever you fancy, the utter fools.

I guess I’m just so busy all the time doing things in RL that I can’t quite cope with the slightly but nonetheless ever-present feeling of having to do things and be productive in-game in order to push things onward.

ITW, It’s work. I already cook and clean, had a garden…etc…It’s not a game…it’s pretend work.