So today’s my birthday and being the weirdo that I am I’m bringing up another topic of debate. So between Rockstar trying to take legal action against mods and Bethesda rolling out the creator club program, mods have become a hot topic lately. Some people say you shouldn’t pay for mods, some support paying for mods.

My stance is in support of payed mods.

Mod developers spend anywhere from a few hours to a few thousand hours of their lives developing their mods. Most do it for free and thus the quality and time put into these mods is limited because these mod developers have to work to support themselves and their families. Paid mods allows mod developers to put more time and effort into their projects. The Bethesda creators club uses a development milestone system similar to to in house game development to pay third party mod developers. This encourages the development of large scale mods and deters the creation of “clickbait” mods. Some people argue that mod developers should just ask for donations, statements given by mod sites have stated that the only mod developers who receive significant donations are the developers of porn mods, so the donation argument is proven ineffective. Mod developers deserve to make money for the projects they make, and i believe paid mods is the best way to support mod developers.

i am not in favour of forced paid mods, especially not in the fashion of the Steam cock-up that happened,
and i’m all for supporting modders that deserve to be compensated for quality work too,
but for a lot of mods i feel they warrant optional patronage (looking at you horse armor etc) and not a pay wall, because not all mods or modders are created equal, even if all mods are work, and “work is work” and “work should be compensated”, doesn’t mean all mods deserve a price tag
but 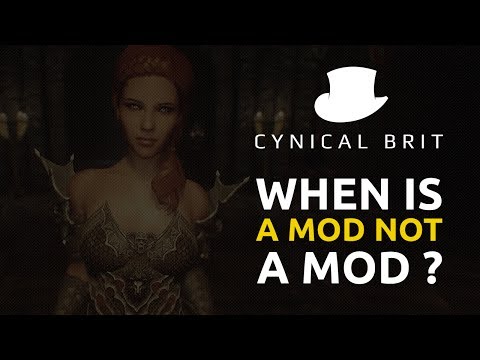 something to keep in mind perhaps

Whilst I don’t use mods, or Steam Workshop extensively, if there was a paywall for access to them then I just wouldn’t bother. Unlike developers there’s little to no lasting responsibility to a game mod and whilst many support there work others might be less omnipresent. However, something like a patreon support page for good mods is far more to my liking.

At least with Modders working with the game devs, like the long war team or the bethesda creators club, the devs can enforce quality control to ensure that the mod being developed is compatible, and although developers like bethesda have made atrocities like horse armor, their system uses an artificial currency. I’m not sure how this currency is acquired but i assume their is going to be a way to get the currency for free so their you don’t have to waste real money on horse armor.

With mod programs like creators club, the mod is licensed by the dev which ensures a legal responsibility to maintain the mods compatibility with the game.

so yea, the gist of it all is i completely support the idea of the Bethesda Creators program, provided they bloody do it right this time
because lets not forget Bethesda aren’t exactly perfect in how they do business (or dlc) sometimes
but at the same time i would trust others far less (i already find steam skins completely revolting in their manner)

their system uses an artificial currency. I’m not sure how this currency is acquired but i assume their is going to be a way to get the currency for free so their you don’t have to waste real money on horse armor

i would be very very careful resting on that assumption for now
this is Bethesda after all
so these credits will 100% be bought by with real money of course, whether or not there will be other means of acquiring them is to be seen. BUT do not be surprised if it does turn out to be just their way of shark cards or MS points or whatever, nor if real money turns out to be the sole method of getting credits

hence the video
the Bethesda Creation club style “mods” cease to be mods and becomes real DLC, just like other skins or extra Publisher/Developer approved licensed 3rd party content
you’ve already prob paid for far worse in other games, at least the avg consumer will have, like Dead Space 3 or Deus Ex Human Revolution bs
that’s not just stuff that would be considered paying for cheats, but stuff you could still get free today by using “cheats”, but in this case then “hacks”, even if it’s just “modding” your resources
something that came free, proud, with games years ago i might add (don’t we all just miss the old legitimate cheat codes?)
Bethesda’s (proposed) way is making legit contractors for content,
other paid mods ofc, might not be worth a dime, hence why no forced pay wall should be for those type of things, nor all companies trusted to handle the idea, (even if no doubt they will reach they grubby hands on it once mildly accepted enough by the public)

paid for bullets in FPS, do we still remember that “joke”??? (oh wait people actually went and did that, holyshit…#“surprised”…)

While you think that by buying the mods you are supporting the maker, either 70 - 90% of the money goes to the company (rest to the maker) or they don’t get paid at all while the company takes all the profit.

They’re usually better off promoting their patreon or other donation site to receive money (even if the donation sites also take a cut).

less than 0.00x% gets donated, so no, bad method for most, even the hugely popular ones
and depending on the business, people get paid more or less, not to mention Bethesda’s program is proposed to function in no such way, so should only be a benefit to the individual contractor

I doubt it’ll actually work out like that in practise, but I guess we’ll have to wait and see.

“Are Creators Paid For Their Work?
Yes. Just like our own game developers, Creators are paid for their work and start receiving payment as soon as their proposal is accepted and through development milestones”

this is how 99% of business works, they get paid for their work, just like regular developers, not by royalties (at least going so far by whats available)
whether or not Bethesda changes this to make it share based only is to be seen, since i wouldn’t put it past them to chose whichever model ofc profited Bethesda the most
or if creators can even make contract negotiations putting a royalty clause in too along with their regular milestone payment
(and just to be sure it’s put out there, Bethesda could in theory just be covering their arse with the milestone/reg pay mentions, and then turn it out to be “milestone royalty” payments, à la how Valve or Youtube don’t pay you until X amount of money is made/sold in account) but that is not what they are trying to present the appearance of though, just thought had to be mentioned, just for conspiracy’s sake

I stand corrected on them not getting paid then. I still don’t like the idea of paying for these.

How is any mod, which are created after the game is released, supposed to be in the game in the first place? Why would skyrim launch with the option to make dragons thomas the tank engine? Or warcraft 3 to launch with DOTA built into it? Mods are made after the fact by players who want to add there own flare to the game, there is no obligation for the modder or the game dev to pre-build this stuff into the game.

I still don’t like the idea of paying for these

at least i paid for it lol, so did couple of thousand others i think
not something i really regret, but would have been nice to have been in “extended” quality instead or something along the lines of the other mods that did it vastly better
Hearthfire just made it easy, more convenient, and “quality assured” so was comfy knowing nothing would break (more than usual anyway)
and that’s what Bethesda is sorta trying to attempt with the Creation Club program (or at least making it out to sound like it)
quality original “mods” being turned into legitimate dlc, no longer just mods, so that the creator can get paid for the content made, in a proper way

unlike how other business’ does it, usually MS or Sony or Publishers with their fee gates that make the notion of paid mods unattractive, not just because of horrendous splits, but because of lack of quality,
Valve ain’t exactly better in the regard either, Counter Strike was free once remember?, now you gotta pay 2½bucks for some of the most shitty uninspiring gun horse armour ever, and their splits aren’t great either, or risk ban if you don’t use official sanctioned and approved “paid mods” (yes skins are mods)

many commits atrocities regarding mods and paid mods, and i don’t doubt many more will, especially if Bethesda succeeds with this, even if doing it right, i just expect the others to handle it way way worse off the bat

if EA learned they could charge you (microtransactions) for “cheats” (resources/bullets), imagine how they, and others, would start to drool when learning they could get you to pay for graphic overhaul mods, or basic config fix/changes,

“Want Watchdogs looking like E3?” (or any other game for that matter), oh no worries, just buy this piece of “graphical fidelity” dlc
“Want your game to not be broken on launch or work for your platform”, - nooo problem make sure you pre-order now and pre-order the pre-order bonus DLC of "Fix>insert game title lazy released here< and Tweak!" (hello “remasters”)
those could not just be considered mods by technicality, but could also be considered stuff that should have been mandatory on day 1 or been protected under consumer laws, which the companies no doubt would love to charge you for if they could
Bethesda trying to give some appearance of adding QA and official sponsored longevity is okay in my book,
others, EA, Ubisoft, MS, etc etc etc., maybe not as much,

gaming industry really can’t keep going down the crapper, have to hit rock bottom at one point right?
much remains to be seen ofc,

In regards of the recent OpenIV debacle, my guess is that T2 is going to implement paid mods for GTAV. That’s because they’re not milking enough money from their customers, as stated by themself.

I support this version of paid mods whole heartedly. It sounds like you’ll have to go through a full development cycle and Bethesda is going to QA the mods to make them worth buying. On top of that, it’s a good option for modders to start making a living.

As long as it doesn’t turn into a version of steam’s paid mods, then we’re cool.

I always wondered why publishers didn’t make paid mods viable. It makes no sense. As previously mentioned, keep it open for free releases, but enable paid options. HOWEVER, and this is a big however, absolutely prohibit piecemeal"freemium" mods, or that will spiral out of control just like the mobile wasteland.

The highest cost of a company in the long run, is the personel.

I do wonder how much of the money they make actually becomes profit? Because I thought a bit further on the subject and while the largest portion of the money goes to the company, they do need to pay the people who are specifically there to make sure the mods work properly and saying “no” to the ones that don’t or break their rules.

Unless they deligate that stuff.