Everyone who uses Firefox might have noticed today that out of bloody nowhere all your extensions have been labeled unsigned, unsupported and disabled with seemingly no way to reinstate them. According to what I’ve found it’s got something to do with some certificate someone somewhere allowed to run out and not renew.

They’re apparently working on it though and I really hope they wont make us have to reinstall every extension once the signing works again because that’s a whole lot of setup I do not want to redo.

If you have the regular build (not the nightly/dev one) then the xpinstall.signatures.required set to false doesn’t fix this. But I got all of my add-ons back by going to about:debugging. Check the box to enable add-on debugging. Then click Load Temporary Add-On. Browse to your Firefox profile in appdata:

In the extensions folder there are .xpi files, those are your extensions that you had. Load each one and don’t close Firefox until they fix this.

I do have the dev version installed myself and the xpinstall.signatures flag did not seem to work for me, but this method did. Even reloaded all my old settings, which I will now start looking into how to export. The flag didn’t re-enable anything, though it might allow me to re-install things. I did not want to have to do that so I did not test it.

not sure if it was fixed quickly or what, but i didn’t/haven’t noticed anything with my couple of addons
not sure if it’s because i actually haven’t closed firefox between yday and “now” so no update could take effect in the meantime on mine?
sigh… just not a good look tho, something like that happening, mozilla need to wake up a bit

It does not seem like it happened to everyone all at once and it didn’t strike me when I first started the browser but just out of nowhere while using it, which was VERY alarming I might add.

Theory is not everyone’s browser check validity of certificates simultaneously so for some it happened earlier and for some it might still happen soon.

There has been a fix released but only through the “studies” system, which requires opting in to sending user data to Mozilla. If you were signed up for that all along then you might have had the patch pushed already. 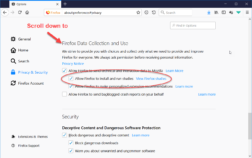 Add-ons disabled or failing to install in Firefox

ahahah, yea, they’d looove to make people opt in to that i bet, think i’ll just hold out on an “actual” fix then if/when it hits me, instead of having to let them track my site visits etc lol

Here’s the detailed information about what happened:

If you are on Linux, you may be using Firefox ESR which will give you an option to immediately and permanently fix this:

Yea, I noticed. Every single one of my extensions failed. And they are vital–yes, vital!–to my browsing experience. Back to Ubuntu until its fixed. I’ll keep looking in this thread to see if its been fixed. lol

wonder how long mozilla is gonna let this go on

side note: seems i was finally afflicted, awmahlawd, commence riot and panic

Looks like there might be a way to get the studies distributed patch through a 3rd party source.
https://storage.googleapis.com/moz-fx-normandy-prod-addons/extensions/hotfix-update-xpi-intermediate%40mozilla.com-1.0.2-signed.xpi
Curtesy of What version of firefox are you running? Apparently beta and nightly need to cha... | Hacker News
I have no idea if it’s truly safe or legitimate though.

This happened to me since yesterday, haven’t use it since.
Firefox has been reaching that point of me considering its use over Chrome or other browser from some time now, many of the add-ons that I use makes life much better and easier on the Internet, but the browser itself has just been a pain in the butt as of late.

Even with Mozilla making poor decisions, i’ll never switch to Chrome and Opera is even worse. I won’t consider Edge because i don’t like MS either. For me Firefox is just the “least of all evils.”

I’d consider this a disaster for Mozilla with how important adblocking is. People need the internet and it’s to a point of requiring adblocking too. I imagine a lot of Firefox users are using alternate browsers right now and many are probably not going back to Firefox even after the issue is resolved.

The silly thing is that this didn’t have to be a disaster. There used to be a toggle in the settings for disabling requiring signatures for extensions. They removed this in version 57. The fact that you can’t even do this in about:config on the normal version is just telling your users to go elsewhere. Obviously you don’t want your users keeping this disabled permanently but it could have been an easy temporary solution that would retain more users. Another result of developers thinking that they know what’s best for users. By the way, give me back the option to disable automatic updating while you’re at it so that i don’t need to mess with about:config.

Add-ons disabled or fail to install on Firefox | Mozilla Support

How to fix the failed add-ons problem from May 2019.

Here is a solution, just tried it and my addons are back.

I’ve been hit too, the internet looks so different without my extensions, even the browser itself is annoying without classic theme restorer

Seems I have to wait until at least Monday (which I assume means Tuesday in Australia) because I stopped updating firefox at 56.0.2

It’s been months since Firefox decided to take about half an hour just to load something, if he wishes so of course, most times I have to “power cycle” the browser to see IF he wants to load anything at all, (tried all the suggestions and remedies, even a pure install), and ram consumption has been most annoying since that quantum update, they also decided to remove support for RSS feeds, forcing me to install another piece of clutter but they felt the need to keep the screen capture function despite every pc on earth having already a dedicated key for just that purpose?

I know the other browsers aren’t all that good either, but the only reason I have been keeping up with it, is because I have set it up over the course of the years to match my needs, and not the browser itself, now, nearly half my Add-ons died when they decided to require signatures for them, I know this time it was a mistake (just like the first time IMHO) so I just have to wait a bit and see, and maybe I’m missing something, but right now Chrome isn’t that much worse than Firefox as far as I’m concerned, it may take some moving and getting used to it, but if Firefox keeps getting worse I may just have to switch over to it.

Sorry for the rant, I agree with you anyway, Fox devs seem to be getting more disconnected from their users, and much of this bad rep could have been prevented, now my Add-ons are back as I write this, but don’t seem to be working so I may have to restart the damn thing, what a pain

I hadn’t realised how appalling the internet is without QoL add-ons…how to casual users cope?

How do they cope? They just dont know any better.

Most users only need ad-blocking and nothing else, and Chrome has it built-in. Since the vast majority of users are on Chrome, those “casual users” are coping just fine.

i still have ublock on chrome, because chrome’s built in was sht last i tried without o.0, hell even their pop up blocker was worse than firefox default(which is garbage) making me install a separate blocker
how anyone is coping on chrome without an adblock is beyond me

never even knew they had a built-in one, i use both ublock and adblockplus, just cuz sometimes some stuff gets past one or the other, so i use both, lol

i use both ublock and adblockplus, just cuz sometimes some stuff gets past one or the other, so i use both, lol

However most users are satisfied with just the basic adblocking. I don’t use Chrome so i had no idea how effective it is. I’m going to assume that less internet-savvy people just accept things for the way it is. “Ads are just a part of life” kind of mentality.