Free for a limited time I am not a monster [Ended]

Of course you aren’t! You’re the sweetest dino to have ever lived.

Why is this free? Just trying to boost the English-speaking playerbase since like 90% of the current players speak Russian?

Ok, this looks like it could be a good amount of fun, particularly if played within the forum.

As a big turn based fan, I’d be up for this, assuming I can work around my limited free time.

Each game appears to be up to 6 players.

I look forward to betraying you soon!

But what if you like to play with yourself…
F-F-F*CK!!!..
Play BY myself, by not with, dammit!
No, it was not a Freudian slip of the tongue.
Oh before I forget, I woke up this morning and found this in my Steam activity feed. 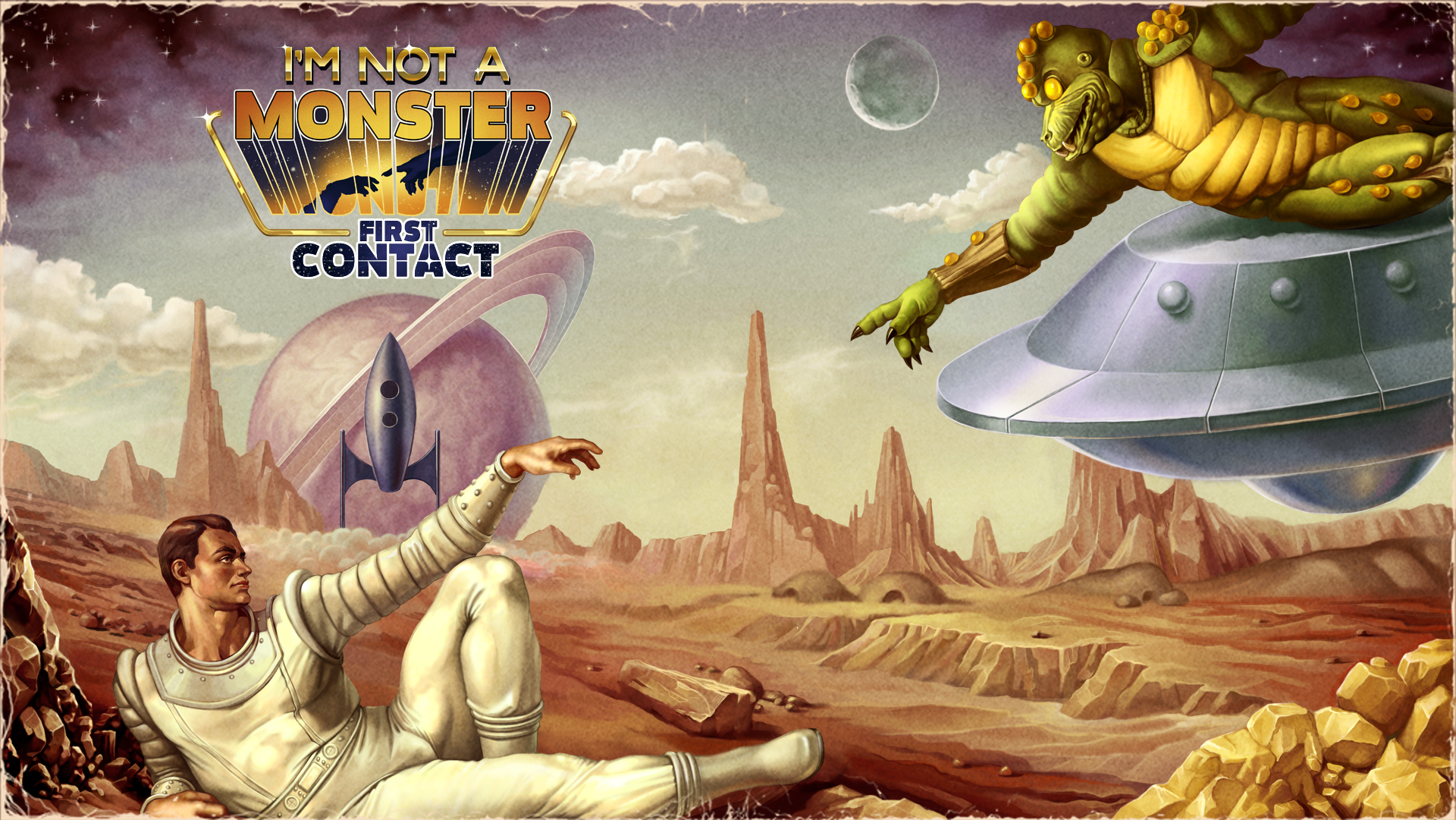 Hello everyone. We’ve released a new update containing a couple of changes (some skins, new language support, bug fixes). I’m not a Monster We’re continuing to develop content for the game: gameplay modes, monsters and more – we’ll soon be releasing...

Thanks for the heads up

Ok, this looks like it could be a good amount of fun, particularly if played within the forum.

I was thinking this same thing even though i haven’t played with anyone here before. I’m hesitant to join randoms because let’s face it, random lobbies are likely to have toxicity, especially if you’re new. I don’t have any Steam friends to try it with so i would consider trying with you guys.

But what if you like to play with yourself…

Play BY myself, by not with, dammit!

What’s wrong with playing with yourself?

random lobbies are likely to have toxicity

This whole toxicity thing is greatly exaggerated and even if you do once in a while find someone who’s being every shade of awful they’re real easy to ignore and never play with again, especially in a random matchmaking system. Don’t let some ambiguous idea of “toxicity” keep you away from trying things you think you might enjoy.

I dunno, maybe you would be better served by asking Mr. Paul Reubens that question yourself, @kovec .

Oddly enough, Mr. Ruebens made those exact same sounds that fateful day…
…and one could go so far as to say, that “wood” was involved also…
…I would imagine his “O-face” closely resembled this too…

y but aren’t u leaving out a slight detail which makes all the difference?

No, I agree with kovec here. Toxicity is not an “ambiguous idea,” it’s a statistical certainty. Normal people + anonymity + audience means you’ll get a certain fraction of the playerbase transmuting into total jackholes. Multiply that percentage by the vast number of people you can bring together on the intertubernets, and you’re going to get bad randos everywhere. The only way to mitigate them is by preventing or restricting in-game communication. I’ll stick to my single-player games, thanks.

I never said that unpleasant people doesn’t exist. What I’m saying is that in my vast experience of online gaming running into them is rare and not by any means a particularly noteworthy encounter.

If you were to fully abstaining from everything you might want to do just because there’s an off chance you might run into an unpleasant individual then how do you get out of bed in the morning?

Play the games you want to play, learn to deal with the occasional raging arsehole without letting them ruin your day, it’s a very valuable life skill.

Dude, I dare u to play cs go, Dota, or Rocket League for one week, and u’ll know exactly wtf he’s talking about; u might not last a week actually depending on exactly how u cope with that shit, but it’s far from

rare and not by any means a particularly noteworthy encounter

when yr stuck with such a person for 45 min in competitive mm it actually affects yr skill cuz just cuz of the stress that it provokes, that stress level also depending on how much u value yr rank u worked hard to achieve (or not)

I can deal with it fine, otherwise i wouldn’t still be playing competitive team games, but it’s definitely “cancer” dude

alrighty, i grabbed it, i have no idea why but it was free so i did

Daaaah! I missed it. No longer free.

What I’m saying is that in my vast experience of online gaming running into them is rare and not by any means a particularly noteworthy encounter.

My vast experience of online gaming has been very different from yours. I’m nearly 40, it’s not my first time around the block either. I’m not saying your perspective is wrong, it’s just been different from mine.

But to get back on topic, are people interested in forming some matches?

Played about 10 games of this, even got a steam code as one of the magic ball rewards (PM me if you want it)
It’s actually pretty dull - sadly.

I really like the combining of items and weapons into a special ability, it adds a nice touch, but the game is just not very engaging, it’s probably due to the sheer silence in which people play it, but never the less, it doesn’t appeal.

On an entirely other note, I am loving Subnautica! I had it on my wishlist for a long time and managed to not learn anything about it, and am really enjoying playing it blind! Best way for survival games, so if you feel the need to comment, please use the spoiler tags as appropriate.

For the first time in this place I’m gonna disagree with you buddy, there are certainly games where the rule is awful treatment and manners. This happens when several factors play a role, not only some jerks being jerks but, let’s say, a non-existent or no-working reporting system, a poor matchmaking (because someone gets placed where they shouldn’t and others feel X person SHOULD know certain things) and instead of adressing it properly the insult and what not.

I often just mock them in the most naive possible way, like answering “Kill yourself” with things like “Is that a bad word? Please don’t say bad words or my mom won’t let me play again” and what not. This seems to be truly infuriating for these kind of people, maybe because they are inmature or even kids.

Toxic online behavior it’s something to consider, always. I think you may have quite good experiences due to your choice of games. Let’s say we interact in Occupy White Walls, or Journey (coming to PC) or Trine 2, people who are able to enjoy such things probably have some sort of sensitivity regarding appreciating art, wich is ultimately human work and so on, and therefore, probably can pour some of that into human interaction. Also, in theory, games that require strategy and an interesing intellectual input should bring people willing to learn and challenge themselves, like let’s say Magic The Gathering, but then you meet the kind of person that only desires to feel above others, wich I’m not sure if it’s more common among academics but certainly it’s not less common, and so on.

Don’t get me wrong, I made some close friends over the net, heck, I met my partner in the internet 8 years ago!

People (including me) are more picky about this behaviour in videogames because it’s “time to relax”. Dealing with an asshole over a problem, sure, but in my free time to relax? Not worth the chance many times.

You all feel free to disagree, I can’t help but feel you’re disagreeing with the wrong parts though. You’re picking at my personal experiences, things you actually can NOT disagree with. These things you all are describing are not things that I personally experience at intervals sufficient enough to warrant such concern. Though you can of course share your own incongruous experiences.

The part of my previous post where I posted an opinion and an argument that you could disagree with is where I try to encourage people to not abstain from things they enjoy. I do not want people to be scared to try their hand at things, I do not want people to believe that the world is such a horrible place it’s better to just stay in bed. That’s what I’m trying to accomplish and that I feel like you’re trying to inhibit.

The way you’ve chosen to go about it is also kind of weird, @M00 trying to claim that I do not have the experience I JUST told him I had. You trying to claim I don’t play “the right games”. Attempting thus to dismiss my experiences as invalid. I’ve played Dota 2, Eve online, Starcraft/bw +2, Quake, 2/3/live/champions, unreal, +tournament (all of them), I’ve played League of fucking legends and so on and so forth. Only game I have not ever played at all is rocket league.

And as I said, of course you’re going to run into immature, hostile or just simply stupid people. Whether an encounter with one of those turns toxic depends to some extent on your own behaviour in response to it. Neither of you seem to be part of the solution I’m afraid.

There’s also the old adage “If everyone you meet is an asshole, maybe you’re the asshole” to keep in mind.

Which brings me to the point about caring about my points or rankings, true I’m very carefree in that regard, losing games does not bother me. I’d recommend trying that out. Or about people playing “where they don’t belong”. Yeah sure there’s certainly account boosting and other ways to inflate your rankings to get into games where you’re probably in above your head, but they’re really not going to be in every game you play.

Matchmaking is certainly not perfect but especially in the large well established titles it’s something that’s been worked on and tweaked for years and years now, you really can’t put that much blame on it anymore. Again if you’re running into a lot of awful players, just might be that you’re where you belong? Or do you also suffer the illusion that you’re better than your ranking?

In the end the only thing I’m really trying to say here is that online gaming is fun and no one should feel like they can’t try anything out for whatever reason. I will also reiterate my point about learning how to deal with shitty people being a very important skill. Figure it out.