right, well, that explains it then, lol

yo, it’s now been confirmed it is indeed the best-selling Ass Creed game in its first week, even outselling what they used to sell on Steam, which is insane 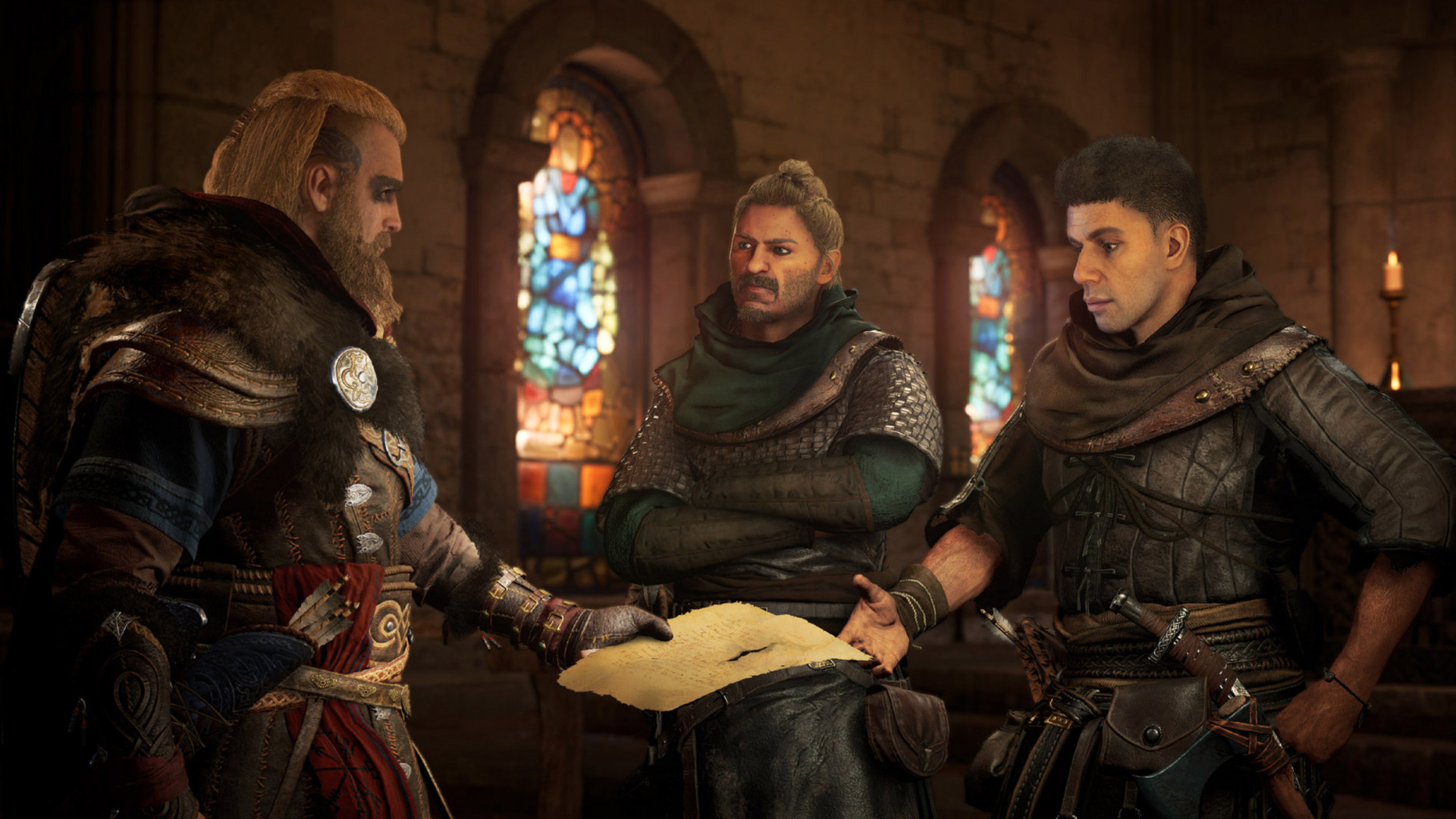 that is impressive and, again, insane, who would’ve thought? this wouldn’t be the first game outselling on Epic vs previous games on Steam at launch (though in this case, it could be most copies were sold on Uplay and not on Epic); I remember the same being reported for BL3 and Metro Exodus

As the saying goes “There’s a sucker born every minute” so taking that into account Ubisoft’s customer base will obviously grow as time passes.

I don’t rly know what that means

to me, it’s a game bought by gamers; to each their own taste, both in games and in platforms/companies

I’m just surprised games are outselling what they used to sell on Steam before; I personally would’ve never believed that to be possible (it certainly might not have been the case on Origin, I imagine)

and though the timed-exclusivity issue definitely sucks balls, in the end, it does mean there’s more competition in the market, and competition does benefit the end customer

Let’s face it…Vikings sell. That’s honestly one of the biggest reasons this one sold so well. It has nothing to do with not being on Steam, it is all about the theme.

There’s also been a huge Asscreed fatigue over the past several releases, people had high hopes after Black flag which were thoroughly dashed by Unity’s absolutely hilarious launch bug fest. Then syndicate came around and set a new low point for the series. Although “critical” reception have always seemed to be favorable it didn’t seem to me like neither origins nor odyssey really struck home with people in the long run. Although according to wikipedia Origins sold twice that of syndicate early on and Origins was “pacing better than any other title of the series” so it’s been an upwards trend.

Suffice to say each new title will sell more than it’s predecessor, if it doesn’t they’ve done something wrong. While I would argue they certainly have, every time, Ubisoft is very good at keeping people coming back to buy the same old stuff over and over.

They sure do , but i feel like there is more to this. Ubisoft just knows how to hype up their mediocre games . Lining up this release with new console generation was very smart choice because they can easily boast about ‘new gen graphics’. There’s covid as well with a lot of people spending a lot of time inside. I feel like way more people are becoming ‘gamers’ now but that most casual type of ‘gamer’ which buys newest and most marketed games as ‘best’ games since they have no knowledge or developed tastes for video games.

Assassin’s Creed games always sell well. I mean, if they didn’t we wouldn’t have so many of them

Anyway, it’s not that not being on Steam is the end for these type of games. Of course they will sell well nonetheless. The thing is: how many more sales they would’ve gotten if it was os Steam too? Because I’m of the belief that if you put your games on as many stores as possible, you’ll sell more.
Look at EA, the left Steam, created Origin and continued to sell games. But now they’re back. Why’s that? Because they want to reach as many people as possible.

I read a rumour about a game coming to Steam, that if it becomes true, just proves even more what I said above. And this game sells a lot. I’ll come back to this post, when (if) it happens.

As for where they got more sales, I believe it was on Uplay, as it’s stated on the article: “driven by all-time record Ubisoft Store sales performance”. The same happened with Division 2, but then we found out that that game did not meet Ubi expectations. Not that I believe Valhala will have the same fate.

It just sucks that Ubisoft decided that an audience they sold to before no longer mattered to them. To me, that is a big ole spit in the eye and sorta makes me never want to buy from them again (this time, exception, as Vikings lol).

I feel like, at this point (of where I am in the game, which to be honest, is not very far), Odyssey is still a bit better in terms of narration, but Valhalla is certainly not generic. A bit buggy, but good.

I believe they’ll come back to Steam eventually. It’s just that Epic must have paid them a lot of money.

I mean, up until Epic appeared, they released all their games on Steam, and sudenly decided not too?
Everytime their games go on sale, they come to the top sellers on Steam. Do you think they don’t want that money anymore?

They must be looking at EA and Microsoft, and at the success they’re having, and want a slice of the pie too.

I read a rumour about a game coming to Steam, that if it becomes true, just proves even more what I said above.

until now, almost all “Epic exclusives” have been coming to Steam exactly one year after their initial release, so maybe it would be weird if that particular game you’re thinking about did not do that

As for where they got more sales, I believe it was on Uplay, as it’s stated on the article: “driven by all-time record Ubisoft Store sales performance”.

so whether they sold more on Epic or on Ubisoft Store, we’ll only know once sales numbers relevant to that are released

I believe they’ll come back to Steam eventually. It’s just that Epic must have paid them a lot of money

none of Ubisofts later games has come to Steam after making the deal with Epic, even past the year mark like other timed exclusives
for conspiracy speculation-wise, it’s worth noting Tencent has a share in both companies, and tho the stake they have in Ubi is smaller, they do share a special business partnership/relations
tinfoil hat could suggest there is a long term goal with this approach, worth more than the “nickel 'n dimes” they get from Steam discount sales

not all Epic exclusives are on Epic only; they just aren’t on Steam for a year and then do come to steam a year later

none of Ubisofts later games has come to Steam after making the deal with Epic, even past the year mark like other timed exclusives

for conspiracy speculation-wise, it’s worth noting Tencent has a share in both companies, and tho the stake they have in Ubi is smaller, they do share a special business partnership/relations

tinfoil hat could suggest there is a long term goal with this approach, worth more than the “nickel 'n dimes” they get from Steam discount sales

which would make sense to do for Ubisoft even if Tencent wasn’t behind them, since some ppl hate Epic so much that they’ll end up buying on Uplay anyways, which is a double win for Ubisoft

I belive the rule of “one year after comes to Steam” is not written in stone. Satisfactory, for example, took more than a year.

But yes, in Ubisoft case, there seems to be something more. We don’t know what kind of deal they have and for how long. I’m just saying that I believe that they’ll come back someday. Time will tell.

But this game has nothing to do with Epic. And if it really comes to Steam, way more than a year has passed.

you will however still have a segment of people that want their games unified, and “refuse” to buy if a game isn’t on steam, ex probably one of the reasons EA switched to be on Epic and Steam now too.
i would however guess that the fraction such customer base makes up for is small enough in Ubi’s eyes they don’t consider it a loss worthwhile compared to their overall gain of not being on Steam, (long term plans or not #tinfoil hat) - since automatically by being on steam to “please” that small portion of players, they’d likely lose out on parts of the other people that didn’t mind coming to uplay before and giving them the full cut
Long term/short term, for a big guy like ubi with their stupid effective hype machine, there is probably not much loss not being on steam these days, and they’ve been vying for 100% cut of sales since 2009

we don’t know if Satisfactory had a normal deal with Epic given it’s, and still is, an Early Access title/development.
We do know that other games that had the timed epic exclusive, and from indie dev reveals/kickstarter switcheroos etc, that Epic does a 1 year exclusivity deal as term for them coming to their store/getting the payday bonus "buyout"
i’m not expecting Ubisoft games coming to Steam, Ubi has been wanting off Steam for years - and Epic want nothing more than for Steam to not exist/become the new default platform, a match unlikely to encourage their releases getting on Steam
^otherwise you’d have seen the Division 2 etc on Steam by now
+the better their title manages to sell, despite no Steam, makes the return to Steam that more unlikely

I know that the majority of deals has been 1 year of exclusivity (disclosed by Epic and by pubs/devs). But what I meant was that when the deal expires, there’s no obligation for them to release on Steam right away.

Take Shakedown Hawaii, for example. The 1 year deal expired but the game only came to Steam recently, because the dev was working on a major update and wanted to release it there once finished.

As for Ubisoft, like I said, we don’t know the deal (if there’s any) and what’s in there. They might come to Steam someday, they might not. Only time will tell.