The Guardian is doing click bait headlines now?
Thought they at least considered themselves a serious publication.

Why is it click bait? It’s a massive stash of weaponry that could have been used for any number of things.

took roughly 30 law enforcement personnel over 12 hours to remove all the weapons. 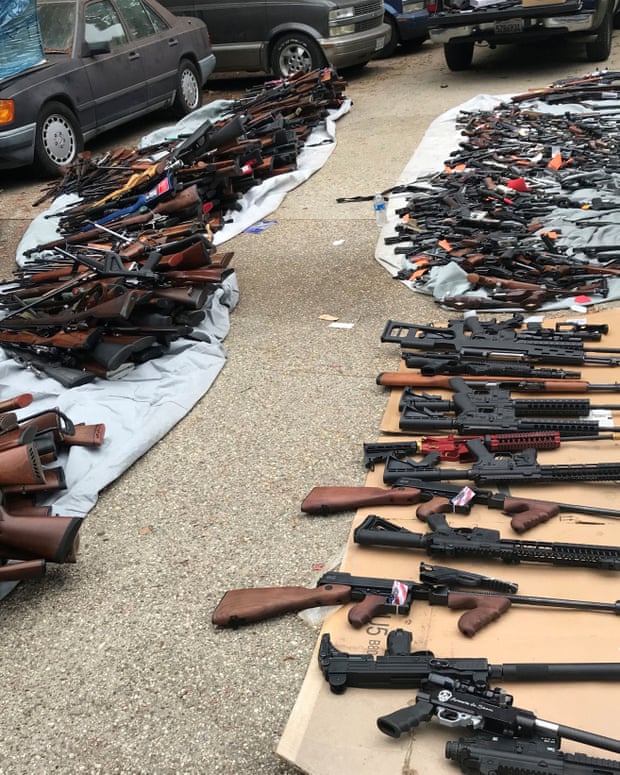 I don’t think they have much of a choice. They’ve been asking for donations just to be able to keep functioning for a few years now.

So either they find a way to generate more traffic or they’re just going to be a non-existent serious publication very soon.

Yeah, but the association with the Getty family does warrant a little bit of a question mark…

Now, for a different brand of crazy (and some food for thought)… The EU is funding the development of AI-powered drones that would autonomously patrol Europe’s borders. The project's potential for military use can't be ignored.

the end times are near 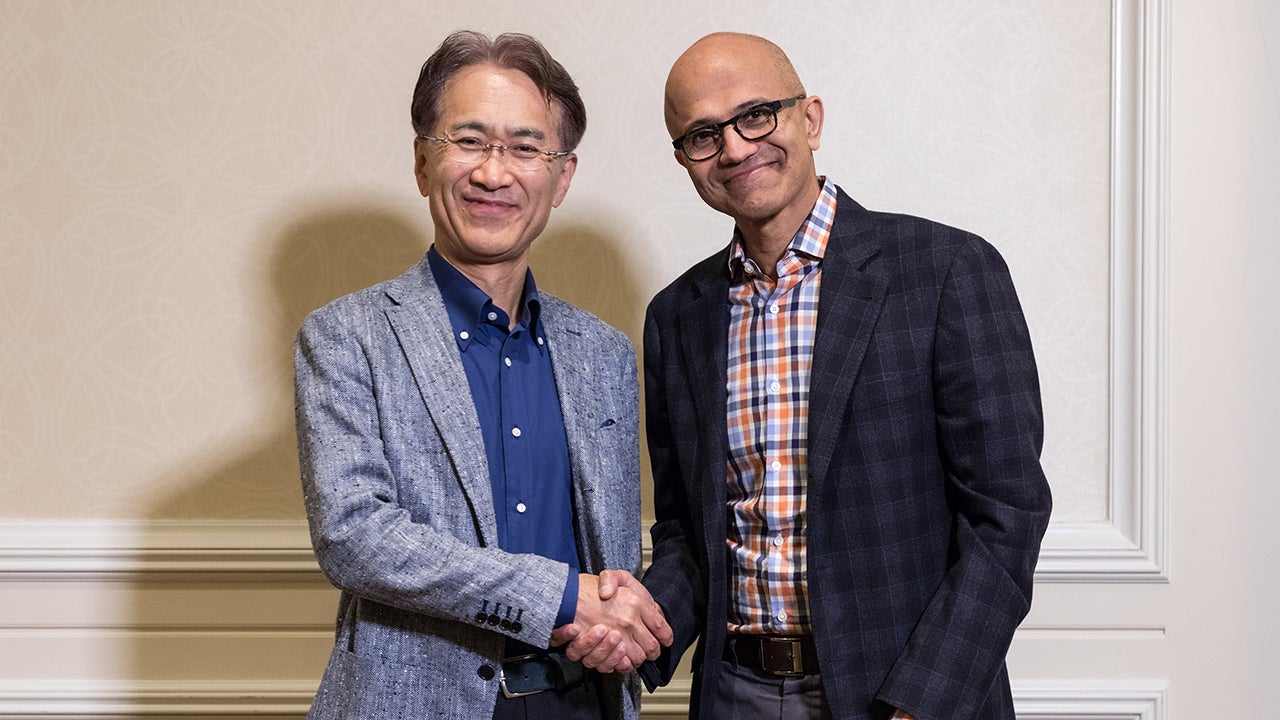 Sony and Microsoft announced a partnership to focus on improving cloud gaming, AI solutions, and more.

Not gonna work unless they get Comcast to stop screwing cust- on board with it.

Man Wants Town To Pay For Damage On His Lowered Car After Driving Over Speed...

Man Spends £3,000 To Lower Car Suspension, Can’t Get Over Speed Bumps: People will go to all sort...

He does realize that even the manufacturer says modifying your car voids any warranties.

I think this is a case of self entitled dumbass, not just millenial. They come in all ages. 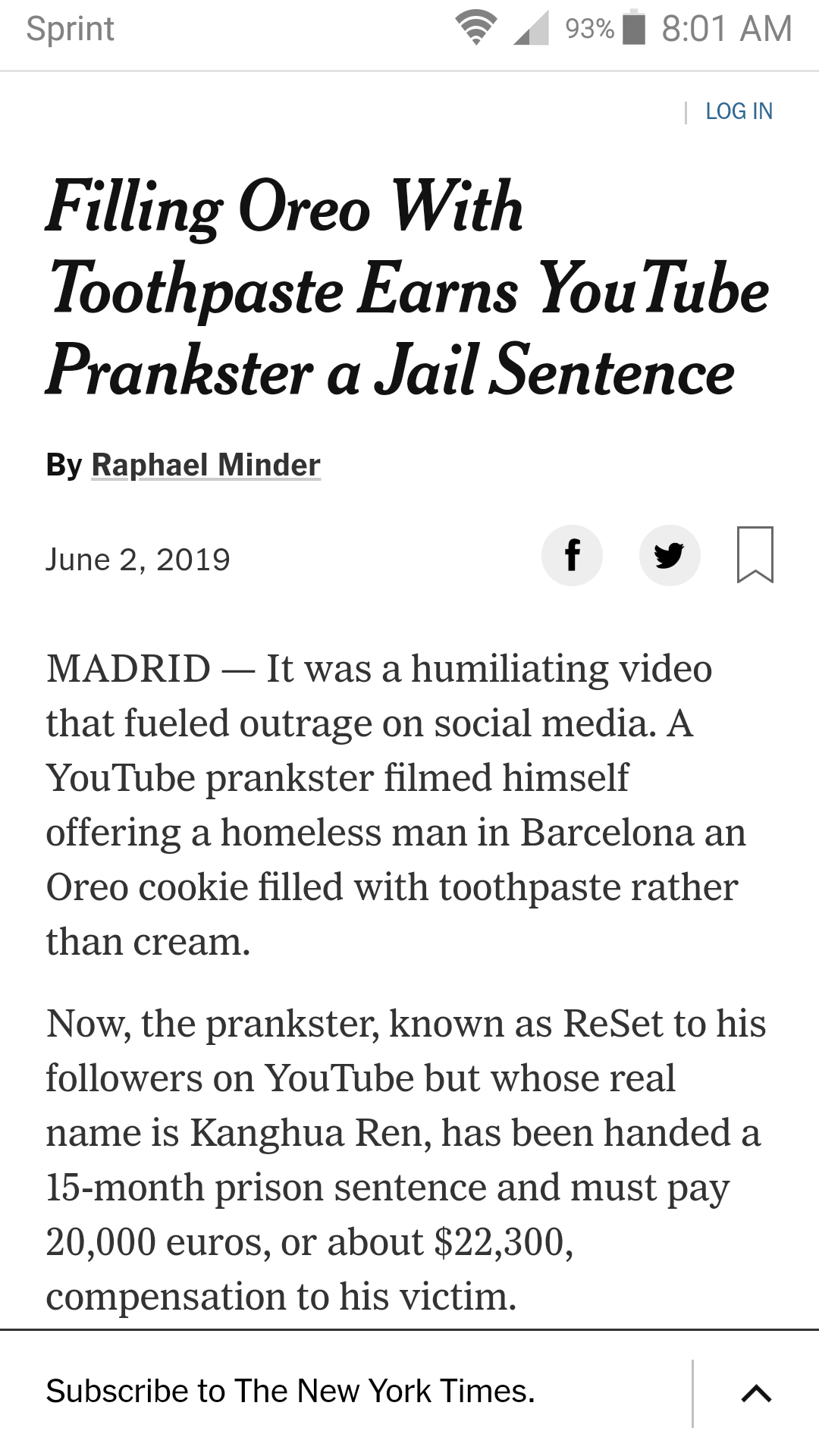 Really sad that people go out of their way to put other people’s health at risk, plus the potential humiliation that comes from being secretly filmed as the butt-end of a joke that is meant to go viral. I am glad that he got the heavy punishment, totally deserved it.

Also noteworthy that this was not an isolated case and the judge stressed that this guy had a history of abusing others for his channel and that he built it upon that principle. He’s also banned from having any social media accounts for 5 years, lol, so the judge basically killed his channel and destroyed his career, which i think is maybe a bit excessive? Maybe there was room for giving him the opportunity to clean up his act first and perhaps take it in a different direction? Also noteworthy is the fact that the person who ate the oreos ended up vomiting (and i suspect this was also uploaded in the vid), which i guess does help explain why the punishment is so heavy.

he should have been thrown to the lions
… wait it’s spain, punk idiot kid should have been tossed in the arena with a bull
-theses bs “prank” channels piss me off, and i don’t think there is anything “crazy” about 1 of these dumbasses finally getting a sentence, if only there were harsher and more widespread laws against this kind of ridiculous behavior, “people” deserve some rough consequences for doing stupid sht like that

I was more of filling an Oreo with toothpaste is crazy.

Seriously, toothpaste in an Oreo is a prank I’d expect dumb guys to pull on their friends, like dudes you grew up with for a ‘laugh’. Feeding someone who is hungry, or even starving something that nasty, is just plain cruel. The sentence was deserved I think. I hope the poor homeless guy was well taken care of afterwards. This kind of stuff makes me really sick at heart. Money and fame are so flitting, why do people find them both so much more valuable than life?

as cruel and disgusting as it is, i think the punishment does not fit the crime at all. He should have been given 100 hours of community service working with homeless people or whatever so he could do some good for the community and that could actually give him an opportunity to become a better person and learn empathy. He should also have been given the opportunity to change the direction of his channel and perhaps do something beneficial with it.

He did something cruel (not that cruel really) and humiliating to another person, yes, but there’s ppl there who get far less punishment for snatching old ladies’ bags and even real store hold ups

this guy’s life is over, he will always be considered a criminal and his means of income got cancelled; there’s a good probablility he might never come back from this and end up killing himself actually in the long run

even just paying 20,000 euros compensation to the victim by itself would have been quite insane and way more than enough as punishment, and way enough compensation as well; that’s like winning the lottery for the victim, whose, let’s not forget, only damages was a minty taste and 1 case of alleged vomiting, something plenty of youngsters do every weekend for “fun” because they just drink too much

i think this world has rly gone insane

His life isn’t over. He can still get jobs. Shitty jobs, but jobs nevertheless. Source: I know someone who went in for something worse and he’s able to get jobs. In addition, the YouTube guy will likely be able to clear it from his record eventually.

doesn’t change the fact that this punishment is very excessive. There’s actual criminals out there who hurt ppl and get way much lenient sentences. There’s rapists who never even go to jail.

i think the punishment does not fit the crime at all

It is quite harsh indeed.

I think that would be good, and I would have followed this same train of thought as well. Plus the fine of course.

His life isn’t over. He can still get jobs. Shitty jobs, but jobs nevertheless. Source: I know someone who went in for something worse and he’s able to get jobs.

Yup, and not necessarily shitty either. I know plenty of people who get back on their feet after having much worse things happen. Life moves on.

had a history of abusing others for his channel

So it’s not one act, but a series of them. In other words, he has been doing to others what he probably would not want to have happen to himself. That’s just basic and being human. He can’t follow a simple train of thought to be considerate of others in modern day society.

“people” deserve some rough consequences for doing stupid sht like that

Hopefully this harsh sentence will stop some of these idiotic trendy acts of stupidity that gets them paid.

I was more of filling an Oreo with toothpaste is crazy.

For sure, it is crazy. But it’s fine if he wanted to do it and try to eat it himself. Maybe try to blindfold himself and try a taste-testing difference, have that on video. It would be funny, and he would be doing it to himself.

Sad but true, but doesn’t mean that those others shouldn’t be punished. If they all want to provide photographic or video diary evidence against themselves, I am sure law enforcement would be happy to go knocking on their front doors.

only damages was a minty taste and 1 case of alleged vomiting, something plenty of youngsters do every weekend for “fun” because they just drink too much

There’s also the issue with personal choice there. Someone hands me a cookie on the streets, if I am eating it, it’s my own fault. But for a homeless person, who presumably doesn’t have enough food, this could be so much more. Ingesting toothpaste isn’t exactly just minty. Small quantities shouldn’t cause any health concerns, but there’s a reason we don’t go out of our way to eat the toothpaste. Also vomiting can have significant risks associated as well.

There’s actual criminals out there who hurt ppl and get way much lenient sentences. There’s rapists who never even go to jail.