I know we have some scientific experts here in our ranks. There’s a very specific word/term I am looking for regarding an unexpected change in leaf shape.

This came up years ago when we had garlic chives in our garden. We had seen one leaf that grew out curly instead of straight. I will be honest, I don’t remember if the whole plant’s leaves were curly/spiral-shaped or wether it had been just a leaf. I somewhat remember it as a genetic mutation, but I could be wrong about that.

We managed to look it up then, but trying to find the same word/term again, we have been unsuccessful.

I am turning to our friendly Chrono community for advice, because I would rather ask here than almost anywhere else. We scoured the internet trying to replicate our searches from years ago, but to no avail.

I am sitting in bed typing on my phone, so pardon me for not elaborating further. The closest plants that I can come up with are spiral grass, some with thin, long, yet flat leaves that are curled up. But this type of curling in spiral grass(es) is expected. I am looking for the word/term describing that unexpected phenomenon.

I am going to bed, but I will thank you in advance for your thoughts and insights. Maybe someone will have an answer by the time I get up!

Not a botanist, but after searching for a bit, I am wondering if you are looking for polymorphism?

That’s quite of a broad answer don’t you think? he may be looking for a scientific word that is more specific to the case of a leaf or leaves growing curly instead of the way they should be, besides, polymorphism refers to something that either changes shape or is of a different variety of the same genotype, like an albino tiger.

Here, however, unless I’m reading things wrong, the plant was already there and it just happened to grow curly leaves one day, for which there are many reasons to happen according to the Wikipedia article, which I also assume is not what @YQMaoski is looking for?

Well, like I said, not a botanist so I don’t really know anything about it. Figured I would wager a guess…
Guess I’ll take my star and go:

Let’s see if I get a star too

After some searching, I managed to find these:
http://florafind.mainegardens.org/PlantPix/Thumbnails/ALLIUM%20SENESCENS%20VAR.%20GLAUCUM%20-DSC_0033_SZ245.jpg
Allium senescens var. `Glaucum’

I’ve really no idea if this is what you’re talking about but this article talks about them being a variety of chives with a pink or purple flower, it’s silver-blue leaves are said to swirl like a cowlick, whatever that means.

I usually see that for hair. I’ve got two of them. How I understand them for hair, they are spots that like to stand up, or are in a different direction than hair around it. Supposedly like if a cow would lick your hair. (have not tried, cannot confirm.)

Definition per web search pulls:
“A cowlick is a section of hair that stands straight up or lies at an angle at odds with the style in which the rest of an individual’s hair is worn.”

Pretty accurate. best way to combat it is SHAVE SHAVE SHAVE. Short hair. Speaking of which, about time for a haircut >.>

That makes sense, I guess @M00 could confirm if this is indeed the case :q

Well i can tell a tree apart from flower so ask away!

P.S I’m not native english speaker and i’m not entirely sure how to use this expression ? ‘Tell a X apart from Y’ or ‘Tell X and Y apart’ ?

Either is perfectly fine.

Is the term you’re looking for epinasty? 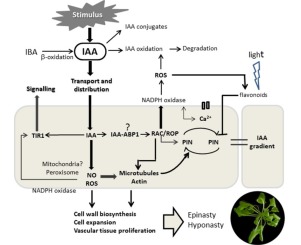 Leaf epinasty and auxin: A biochemical and molecular overview

Leaf epinasty involves the downward bending of leaves as a result of disturbances in their growth, with a greater expansion in adaxial cells as compar…

I am wondering if you are looking for polymorphism

Was going for something very specific, as @Inferry mentioned.

@Inferry, it wasn’t on that Wikipedia article, it wasn’t so much curl as it had been spirally. The difference in those particular chives you mentioned is that it’s supposed to be swirly like that.

Is the term you’re looking for epinasty?

I am not sure but I don’t think so. Epinasty seems to be a downward and outward bend… I remember the leaf as being straight up swirly.

the leaf as being straight up swirly

I couldn’t find that many explanations for folia crispa (curly leaves) as I thought I would, but these were some results.

Also I’m confused because a specie of garlic itself seems to be curly according to this:

Allium spirale, also known as Korean aging chive,[2] is a plant species native to Korea, Primorye, and parts of China.[3][4] It is cultivated in many other regions and has for some reason obtained the common name German garlic.[5] Other common names...

If none of this is it, I’d suggesting posting on r/botany.

hello’iform (helix, a snail, forma, shape), coiled like a snail shell ; Hel’icocarp {Kap-yrds, fruit), Nicotra’s term for a fruit whose constituent carpels are arranged in a spiral; hellcogy’rate, hdicogy’rates (gyratu8, turned in a circle), having a ring carried obliquely round, as the annulus in some Ferns ; hel’lcoid, helicoid’eits {eJSos, like), coiled into a helix, or like a snail-shell ; ~ Cyme, a sympodial inflorescence whose lateral branches are all de- veloped on one side, a bostryx, or drepanium ; in some text- books this is erroneously called ’ scorpioid ’ ; ~ Diohot’omy, when in two unequal branches, the more vigorous one is uniformly on the same side ; ~ Inflores’- cence, when the flowers are in a single row ; ~ unlp’arons Cyme, a bostryx ; helicoi’dal, spirally twisted, in the manner of a snailshell.

I don’t really like botany so feel free to enjoy this huge 342-page glossary to your heart’s content.

What it had been was plants of this kind:

Notice the flat and straight leaves.

What ended up growing, in a large patch of this stuff was one or two leaves that looked almost like this:

With no rhyme or reason and it was really neat.

I don’t think it’s circinate or resupinate, because it was a spontaneous change among a patch of very much alike plants. It wasn’t just one or two, we have been planting and cultivating this plant for years. Only once did those circularly curly leaves show up. (It’s perennial, so we don’t sow new seeds often, just keep harvesting and reseeding from the same plants for increased abundance.)

It seems that we will keep searching for answers…

Thank you all for the help!

Circumnutation as a visible plant action and reaction: Physiological,...

Circumnutation is a helical organ movement widespread among plants. It is variable due to a different magnitude of trajectory (amplitude) outlined by the organ tip, duration of one cycle (period), circular, elliptical, pendulum-like or irregular...

Maybe it’s the antonym then, hyponasty, which is when a leaf curls the other way from epinasty. Though these are used to describe the normal mechanics used by leaf growth to reach their desired shapes. I can’t seem to find if there are any other words that describes a pathological extent of the function.

Though I found a research paper showing effects of carbon monoxide on plants causing excessive hyponasty, the results described as curled.

As demonstrated by @M00 both of these are used to create curls by elongating one side of a flat item causing it to curl. Both epinasty and hyponasty would be the process through which your curly long leaves came into being. (As far as I’ve understood the material at least)