2018 is here! Which game did you start your year with?

Continuing the discussion from New Year's Give Away

In the spirit of wishing everyone a happy 2018 and discussing games, I’m wondering:

Which game did you start 2018 with? I’m seconds away from firing up Planescape: Torment for the first time in my life! I’ll see you guys on the other side…

PS: It was great finding out about this small and wonderful community in 2017. Brightened my year’s end, and hopefully it will continue to in 2018.

I am currently deciding on either Antichamber or Mark Of The Ninja for my first game to play this year.

For me it’s Civ 6 with a bunch of modded extra civs for the first time: Let us see who will win the deity domination war in the 12 man FFA between:
Gilgamesh
Viking Guy
Tokimune
Tomyris
Teddy Roosevelt
Pedro II
Philip II
Arturia Pendragon of Britain
Shanks of the Red Haired Pirates
Ram of Lowee
Noire of Lastation (yours truly)
and land but definitely not least
Gabe Newell of the Balanced PC Master Race.

May the best CPU win! (hint: it’ll be neither Gilgamesh nor Viking guy, since I’m currently kicking their asses at the same time, even though I’m stuck between the two of them)

After that I’ll have to try out the Glorious PC Master Race version of Gabe Newell (which is broken as all f**k) myself.

I started my year with murdered: soul suspect, a very chill game, with little to no combat. it’s nice. I just get to float through walls and have a collectathon. good times.

I have decided on Antichamber and i am currently in the process of booting it for the first time.

I played Soul Suspect shortly after it came out, at a friend’s house. We both got really upset at the fighting parts, though. Eventually I gave up on it. To this day, I can’t, for the life of me, think of Soul Suspect without thinking of this exact passage of its Escapist review: 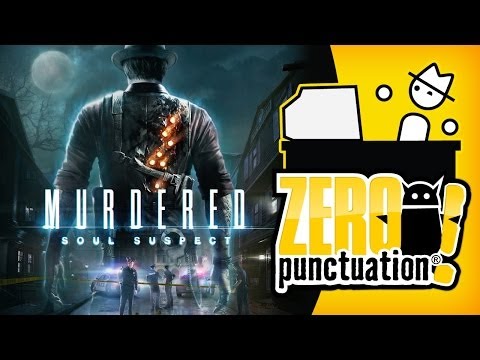 Aaaanyway, I sincerely hope you have more fun than I did with it! It does have its moments.

@acb234 both were excellent choices to begin with. Hope you have fun!

I haven’t touched anything yet, but I’m considering playing Realms of Magic a little bit more, although I’m more inclined to watch some anime or series.

Ive been playing Antichamber for a good hour and a half now and Im not getting too much enjoyment out of it. I like how it confusing it is and how it looks but im not a big fan of the actual puzzles as ive found myself just doing random things and solving them within a couple of seconds. Along with that mouse issues and stuttering i might just refund it.

I’m about play one of this eiter tomorrow or the day after it.
Mankind Divided
AC: Unity
AC: Syndicate

I could also finish any of the other ones, I’ve yet to kill a couple bosses in DS3 or reach Novigrad.

undecided
currently my choices are between:

I liked quite a lot of Murdered: soul suspect, it’s an original point-and-click game with an interesting story, especially the ending. That game even is completely dubbed in different languages. I think something went horribly wrong with the budget; as a consequence the game came out undercooked and the developer studio closed down a few days after the release date.

I second the Novigrad suggestion
My first game of the year will be Witcher 3 as well, recently picked it up again in order to play the DLCs, just about to finish up the Hearts of Stone content. 217h put into the game the first time through and now another 34h already put into the GOTY version.

I’m currently (still) playing Final Fantasy XIII on PS3. Once I’m done I’m torn…but I think I’m going to go with a palate cleanser before I make any big decisions. So that’d be Pony Island.

I love this guy xD

and umm I certainly wouldn’t get upset about it, its only a game

and a very mediocre one at that, its just nice. you can tell the fighting mechanic was ushered in by some cuck … or clown, who thinks thats what the kids want.

eeeeven though kids shouldn’t be playing this game.

wow damn I seriously thought you were gonna spoil the ending for it then.

I was gonna flip my lip xD yeah it is pretty original, but they still crowbarred fighting mechanics that are completely irrelevant they’re nice they’re just not necessary at all xD

also as you can see from the picture up there they thought we were babies and made absolutely no challenge whatsoever for the puzzles.

These two DLC can be called expansions without any fault; they are massive, detailed, packed with lore, story, characters, memorable moments, new enemies and game mechanics.
In Hearts of stone you even come across the best villain in the entire game, a faustian figure that is worth the price of admission by itself.

@kylehayman361 Murdered is a game that doesn’t exactly knows what it is, but it’s worth experiencing once, at a fair price. I see the combat more like some sort of free-form puzzle, for sure the worst part of the game. Side stories are interesting tho.

the side stories have been the most interesting this far to me.

Im only at ashfield cemetery though.

so far though nothing too puzzling has stopped me, I have yet to be stopped for longer than 5 minutes with any of them xD but Im not at the end yet, nowhere near I’d say.

I recognised him for what he was the first moment he made himself known. I don’t know that I can agree with him being the best villain in the game, there are so many antagonists in this title and they’re all written so well that most of the time you don’t even know they are. Then there’s all the villains who are not necessarily antagonists and of course the ever present issue of trying to figure out the lesser evil, there’s rarely a good choice in the Witcher.

What I’ve enjoyed the most from Hearts of stone is what I’ve enjoyed so much from the main game. All the little “unmarked quests” and environmental storytelling that litters the place.

These sort of things are everywhere in this game and it’s a big part of why I love it so much. Exploring the world is so rewarding and they’ve managed to pull off a feat many RPGs have failed in, to create a world that seems living where things are not centred around the player and things happens that I’m not involved with, though some times have to clean up the results of.

After seconding everyone’s suggestion to go to Novigrad, of the two AC you have on your queue, I suggest this one. Because ships. Also, Ubisoft Montreal >>> Ubisoft Quebec. JUST SAYIN’ (not that I like Ubisoft anyway but you’ve gotta pick the best of the worst).

It’s loads of fun, as I mentioned before. Plus, it’s quick to beat. So that’s my suggestion for you.

I am so frustrated by this stupid game you have no idea. The platforming is BAD. And one of the puzzles is in my top “most infuriating” puzzles of all time. It’s not puzzling, it’s just made without any knowledge of what “puzzle” or “game design” mean at all. So really, avoid it like the plague until you feel you have some sort of cosmic obligation to play it.

Gonna start it with my dad very soon! He and I played all kinds of point n clicks together and he was the one that introduced me to Monkey Island and stuff. Feels like the perfect game for some family bonding.

Great game! Don’t forget to go for the achievements on this one too… there’s more to it than the main story.

I’ve just been playing the mobile Animal Crossing game. I’ve checked in every day since launch so it can’t be that bad… just not nearly as good as the regular games.