So I found this game on Humble, and was tempted by the visuals, historical context and apparent similarity to Darkest Dungeon. My question to you: Has anyone played this already or heard of it? The Steam reviews are mixed and there’s apparently some stuff the devs are going to fix throughout October, but I’d like to hear some first impressions from some fellow Chronies.

Not sure if you want to watch through the whole thing: 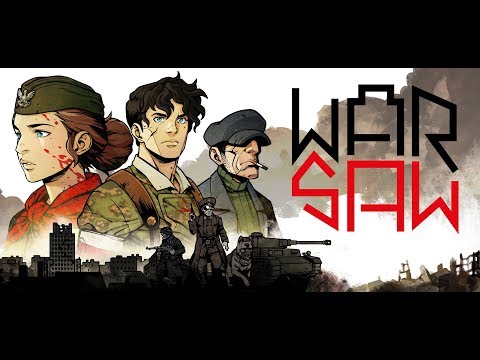 I then played another 45 minutes or so streamed on Steam with Yoshi and Punkster watching and offering some hints.

I am so far not as impressed as I was with Darkest Dungeon. To be honest, I think that the combat gameplay is really fun, and resource management is super tight.

The meta-game and in-game management seems to a little too much to handle in the beginning. I need to look at it more carefully again to be able to tell you what my final thoughts are.

What really bothers me is that you start each mission on a map and you have 100 Action points to move around, if you use up all of your action points (basically how many steps you take) and you don’t finish your mission, you fail it. A lot of times you are going to wander around not knowing how to proceed to your objective and fail. The other biggest problem I had in the beginning is the super limited ammo that I have. The whole combat is based on weapons that use light ammo, long ammo, and heavy (explosive) ammo, and I just can’t seem to have enough in stock. Looting after battle yields such a small amount that if you didn’t go into the mission stocked and you go through a couple of battles, you will probably be a bit short and then it’s just leaving yourself to wander around and be slaughtered, or run out of movement/action points and fail.

Meta-game progression allows you to use commendations earned after earning fights to level up your characters. Each character can level up 3 times and earn new skills. You can swap out skills and weapons, etc.

The actual combat mechanic is good. It’s a 4x2 grid instead of a 4-in-a-row on each side in Darkest Dungeon. You have flanking advantages by attacking enemies on the other row. There are obstacles that start in the encounter, and they act as barriers if you stand behind them to reduce damage taken. I haven’t played enough to give you a solid review, but I at least know that I like the strategy and the battle parts, while I don’t like the meta-game parts too much.

The premise is that you are part of a resistance and your resistance numbers/morale goes down a bit each day, if it reaches 0, it’s game over. So that’s a hard stop to your game.

Otherwise, your characters each have permadeath, so you need to know when to take a step back and when to quit, even if it means quitting a mission and losing your loot/etc and taking a morale hit.

Your characters will heal in between missions and spend time in a hospital.

Price for this game is a little scary, it’s the same price basically as DD. It’s just perhaps not as fun. Both are very difficult, and I feel that this game throws you in the deep end in the beginning, and doesn’t explain enough. But that’s with a reason, because there’s already a lot explained, and if I had to read any more, i was going to be really annoyed with it…

And seriously, the more I read, the more confused I got. Playing more cleared some of this up, but I still can’t imagine how I will at any point come to having enough resources to be comfortable taking on some of these missions.

My current advice, wait for some more reviews, watch some more videos (there should be plenty of RNG in the game that watching others shouldn’t cause a detriment to your own game, if you decide to play it), and wait for a sale…

What really bothers me is that you start each mission on a map and you have 100 Action points to move around, if you use up all of your action points (basically how many steps you take) and you don’t finish your mission, you fail it.

Thanks for posting this detailed review, @YQMaoski! I’ll wishlist the game then, and wait for some more updates and videos about it. The life cycle of smaller games on Steam is pretty short these days, so maybe I can nab it for cheap at the Christmas sale already

Except here, your missions include a series of fights, without very limited ability to refresh/restock in between, and those action points do not restore. If I understand correctly, Deep Sky Derelicts is more of a limited turns to carry out your mission. The movement limitation here is more strict I think in WARSAW. Correct me if I am wrong, I have not played DSD yet, only bought it from a bundle… Story of my life.

Thanks for posting this detailed review, @YQMaoski!

You are welcome, I do think that some future updates and QoL changes could make this game a lot better.

Rebalancing a bit could help too, of course. I will try to keep you updated whenever I get to spend a bit more time with it.

Deep Sky Derelicts is more of a limited turns to carry out your mission. The movement limitation here is more strict I think in WARSAW. Correct me if I am wrong, I have not played DSD yet, only bought it from a bundle… Story of my life.

That seems right… I haven’t gotten very far myself.