Working on art for TTDT (To The Dark Tower), and made this—I really like how it turned out, and wanted to share it with you guys

The base public domain art used was painted by Salvator Rosa, who has quite the colorful wikipedia page, if you’re into that sort of thing Salvator Rosa - Wikipedia

(If you want to see how this all turns out, be sure to wishlist To The Dark Tower on Steam—it will sell for $3.99 at release, and has a lot more art like this hidden within)

broken symmetry is just so much fun

That is really quite something. How do you go about creating art like this?
Thanks for sharing.

it’s actually fairly simple—flip an image in photoshop, smart-fill in the place of where the person was on the right, then hand-draw/pattern brush what you’d expect to see behind the person. Tricky part is figuring out exactly where to mirror it, and in some cases doing some light photoshop at the center line so it doesn’t look bad…

Yes the mirror imaging is easy of course, I was thinking more about the image as a whole, but I’m guessing then that you’ve simply taken to use already existing art and this painting is not of your own creation?

You have managed to erase the dude in an at least at first look believable manner. Of course I can tell it looks shopped, from some of the pixels and from seeing quite a few shops in my time. : )

this is the image I based it from

description of the painting, from https://www.wga.hu/html_m/r/rosa/democrit.html

Democritus, the great pre-Socratic philosopher and founder of a strictly materialist concept of the world sought new explanations for birth and death, appearance and disappearance. According to his theory of “atomism”, atoms are the smallest parts of all substances, uniting and dividing in eternal swirling movements. His ethical system called for a life of moderation and tranquillity foregoing most sensual joys.

Rosa depicts him in the traditional pose of melancholy, amidst a setting of decay, destruction and desolation. Animal skulls and bones, symbols of the past greatness of antiquity (vase, altar and herm) and symbols of fallen power (the dead eagle) are featured in this wasteland overcast with heavy grey clouds. An owl high in the tree is his only living companion, both a sign of night and of wisdom. Rosa’s Democritus is not the philosopher who has reached the goal of his contemplation, nor does he represent serene tranquillity or the superior cognitive powers of the analytic mind. Instead, we see a forsaken thinker contemplating the things that have been the subject of his intellectual endeavours: death, the past, turbulent disquietude, fragmentation. The vanitas symbolism of the objects does not go unanswered: in the figure of the pensive philosopher lies the germ of a response, still caught in melancholy lethargy. 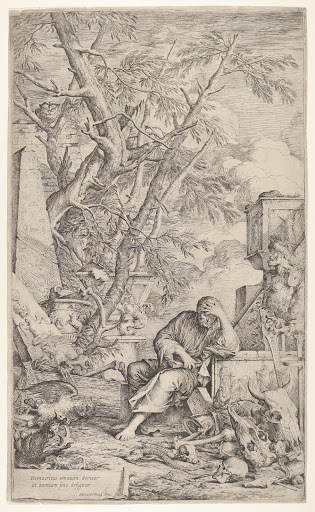 Google Arts & Culture features content from over 2000 leading museums and archives who have partnered with the Google Cultural Institute to bring the world's treasures online.

Working on art for TTDT (To The Dark Tower), and made this—I really like how it turned out, and wanted to share it with you guys

Very cool. I added you to my artist/graphics list for when I post an “expensive but freebie at the moment”.