Slightly old news now, and as a non tablet/phone gamer I was expecting someone else to post it, but for those of you who’d like to stream games to your Android or Apple device, rejoice!

PC gaming in the palm of your hand: Steam Link tested on iOS and Android

Ohh neat I will have to try it out on my Shield portable, Nvidias own streaming program was kind of garbage.

Yup works as well as I’d hoped! Not ideal for some games since the input lag is obviously noticeable, but it’s a good option for a lot games.

It works better for me than the Moonlight app on Android. I didn’t get a noticeable delay, and the setup is much more slick.

It would be fun on the iPad, but I don’t own a mfi controller, and those don’t support all the buttons I use for the games I play anyway (L3/R3, select).

did a short test with it and its pretty cool but first i need to get a Bluetooth controller that works for my phone but it look promising.

Valve says Apple has denied approval for the iOS version of its Steam Link app—which allows users to stream PC games from a computer on the same home network—after Apple initially approved the app earlier this month.

“On Monday, May 7, Apple approved the Steam Link app for release,” Valve said in a statement sent to Ars. “On Wednesday, May 9, Valve released news of the app. The following morning, Apple revoked its approval citing business conflicts with app guidelines that had allegedly not been realized by the original review team.” 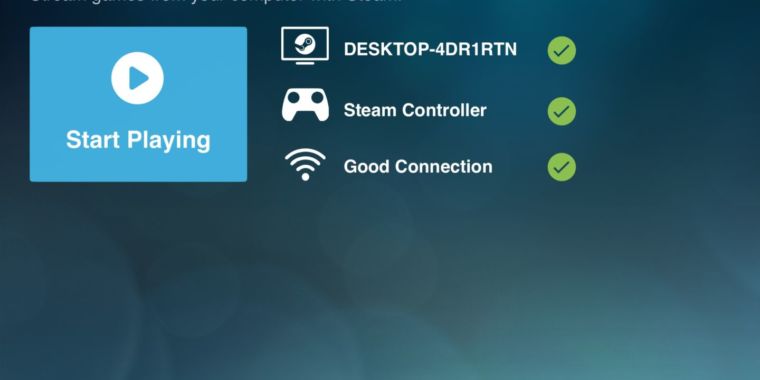 if this part from the article is the reason:

While the Steam Link app doesn’t have any built-in functionality allowing for direct game purchases, users can easily buy and download Steam games to the connected PC through the Big Picture mode interface while connected through the app. It’s plausible this functionality ran afoul of Apple’s guidelines, which require a 30-percent revenue share for any “in-app purchases.”

since part of my recollection of why EA got fed up with Valve/Steam store, was Valve being grumpy towards EA (“muh” guidelines) about not getting their piece of dlc/in game purchases that wasn’t bought “directly” on steam store
(tho probably just a small part of why the conflict began and why EA wouldn’t bother with Valve anymore)

maybe they got to a point where Valve got “too big” for themselves, and we are now seeing gradually the other kids in the jungle gym don’t want to play with them anymore

What with the size of the Steam community I’m not sure it’s entirely sensible to force a proportion of your community onto alternative hardware solutions, especially when those in app purchases aren’t unique to the app itself.

yea, but not like apple are forcing steam users to different platforms, -since they already have streaming apps for streaming games from your pc to ipad or such, so they are probably thinking it wont bite them much in the butt to reject valve
and there is a difference from in app purchases, to where steam sells you full on games, -that then would not be needed to be bought at all on appstore (even if the direct game overlap is smallish)
i just thought it was funny+ironic if that was the actual excuse for Apple -steam getting a taste of their own old guidelines and all that

suppose it’s all about the corporate mantra, “we don’t just want some of the money; we want all the monies!”
(if this is about the money/app purchases at all for them here, and valve didn’t make some other blunder/violation with the app)