If you haven’t been on the bandwagon by now, I applaud you. However many have been sucked into the farming crack addiction that is Stardew Valley.

I have fallen prey to it. I thought I was immune, having avoided the great Farmville era but NOPE. My nostalgic love for Harvest Moon, Rune Factory etc made me fall so hard for this game. After learning about it being solely developed over a series of years by Concerned Ape, that made me support it so much more.

This topic is for anyone who plays the game, has questions, wants to show their love for their waifu, emo husband, or pet!

I’ve seen a lot of the hubbub and watched a Giant Bomb quick look so I’ve been somewhat tempted to try it out. I have no idea if I’d get anything out of it though. I’m typically not really into those types of games.

I reaaalllyyy want to play this game! Brings back those beautiful Harvest Moon days…
But alas, it’s a Windows only game. So I’m waiting for a Linux version to come out. 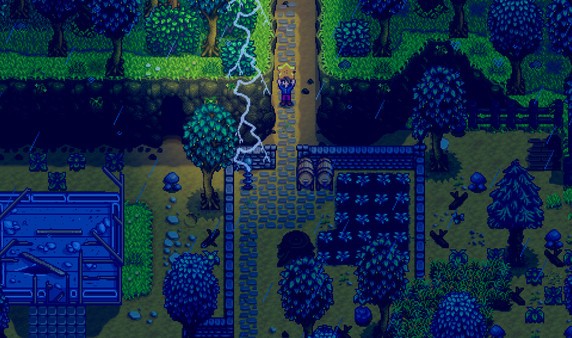 A Linux & Mac version of Stardew Valley depends on sales from Windows to...

Not the best news, but not surprising either. A moderator on the Stardew Valley forum (so someone who would be in-the-know) has updated everyone to let us know it all depends on sales.

A lot of streamers who are not into HM styled games and whatnot have actually enjoyed it. I’ve been a looong time HM fan, and this game is loads better than any HM game released in the past few years or longer.

I have 10 hours in the game, haven’t played it for a couple days.

It’s a really meh game. It’s one of those games that you get just because everyone else talks about it and you just want to see what the big deal is all about, play for a few hours and leave disappointed.

I saw a friend of mine play it on Steam for an hour, and I can’t see what it is that is so interesting about it. I guess it’s just not my kind of game.

It’s not a game for everyone, sadly.

My activity feed on Steam is flooded with Stardew Valley screenshots. I never heard of it before! I gonna try to avoid, because I’m already playing too much and with Enter the Gungeon coming up I need all the time I can spare. :3

Enter the Gungeon is SOOOOOOOO good.

Wait, you mean judgin from gameplay videos, right? RIGHT?! You haven’t played it already, did you?!

And now I have a feeling that we’re going to see Gungeon here :3

I am loving Stardew Valley so so much!

Either this is on purpose or the beers are kicking in mighty strong tonight.