Sherlock Holmes: Crimes and Punishments and Others Are Being Removed from Steam TODAY!

Has to do with licensing. I wish it wasn’t so expensive.

"According to Frogwares’ official statement, the issue lies in the transfer of licenses from the publisher to the developer: “Focus Home Interactive, the licensee (or “publisher”) that was in charge of commercializing these games on these platforms, refuses to transfer the title IDs to us, the creators and IP owners of those titles, even though our Publishing and Distribution Agreement has expired.”

9 out of 10 Frogwares games were pulled from Steam | GameWatcher

Frogwares' games published by Focus Home Interactive have now been removed from all digital storefronts, and the developer has now issued a statement. 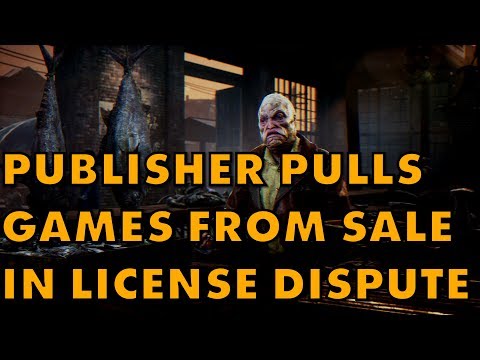 @delenn13 This is a different sort of licensing from what you’re probably thinking of. This isn’t the Sherlock Holmes license being an issue (most of Sherlock Holmes is public domain anyway), this is their publisher, Focus Home Interactive, not transferring what amounts to their games’ entries in various platforms’ stores. Frogwares is losing access to some of their original IP games as well because of this.

To publish games via Steam, Playstation Store, etc, you have to register your game with the platform/platform holder, and that’s what these title IDs are - they’re the ID numbers of the games on the various platforms, and they’re bound to some entity on that platform (to FHI’s publisher accounts, in this case). As part of their publishing deal, FHI created these entries for Frogwares’ games, and Frogwares expected that they’d become theirs when their publishing contract expired. Instead, FHI is holding on to them and not handing them over to Frogwares. Of course, since the games themselves are Frogwares’ property and FHI only has what amounts to a database entry, FHI can’t actually sell the games, which is why they’re being removed.

It’s pretty silly, and the only reason I can think for this happening is that FHI doesn’t want to put in the effort to transfer the title IDs when the contracts expire, since it’s more complex than just pressing a few buttons and likely involves quite a bit of paperwork. It’s cheaper to let the games just languish. Unfortunately, though it’s cheaper, it’s also not consumer-friendly, and hopefully the backlash will make the transfer seem more worthwhile in their eyes xP

FHI is such a cruddy company, just look at how they treated and destroyed Cities XL after they acquired it.

Crap. Wish I had bought that bundle recently which came with a Sherlock Holmes game to add it to my steam library.

I’m a big SH fan and quite like the games I’ve played! (:

You and me both

Same. Guess we can add Sherlock to the list games we can no longer play thanks to lawyers.

Pssst… This is on GoG for 50% off!
Plus …
“Get a free copy of Sherlock Holmes and The Hound of The Baskervilles! The offer is valid for all purchases made until October 11th, 1PM UTC”

And it’s also on Steam still/again.

Update shown from the OP:

UPDATE, OCTOBER 4: Following the initial surprising removal of Frogwares titles from all digital video game marketplaces, it seems that 9 out of 10 games in question have now been permanently delisted. According to Frogwares CEO Wael Amr, “The outcome is pretty bleak, and we are now fighting an uphill battle.”

To commemorate the games that have been made unavailable for sale, Frogwares released a special digital booklet as a free DLC for the one game that’s not been affected, Sherlock Holmes: Crimes and Punishment, which is now available on both GOG and Steam. Frogwares is thankful for the support from the community, and they hope to regain the lost listings in the near future.