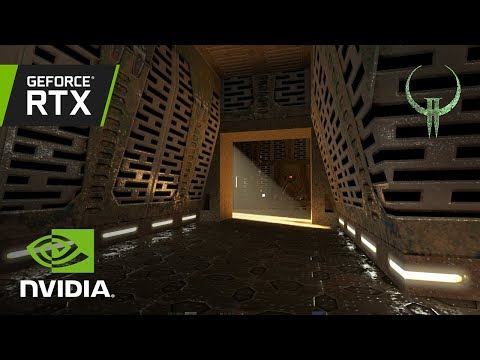 Unfortunately the wrong game to do effects in… We played this when growing up on everything off just so we had clear view on the opponents in MP. The same thing that people complain about in quake champions without giving forced models and removing textures like quake live, quake 3… and whatever.

The game is so raw and skill based that no one from the new generations will play it and this is not something that will make any veteran from the old school gamers to get back to it.

It’s cool showcase of what can happen to the ID tech 2 engine, but we already knew about it, because most modern engines are build around it. John Carmack knew his stuff.

This would be more for the singleplayer side of the game–Quake II was as much about the game and graphics as it was the online play.

I’ve got a GTX laptop and a friend’s RTX laptop ready. I can’t wait!

Well have fun with it. I don’t find it prettier for ruining the nostalgia feel for me, nor I think it will draw new players that will play more than few levels in it … it’s like Meh decision and there are plenty of mods already like Quake 2 Berserker and what not.

I’m so hyped for this

If I’m not mistaken it’s just a tech demo with a few of the original levels and not really intended to revitalize the game for another generation of gamers.

It’ll be interesting to see if the rest of the Quake 2 assets will be compatible with the RTX supporting engine in a similar way that you can use the original Doom WAD files to play it in reworked versions of its engine.

I’m not a fan of Nvidia’s proprietary tech but I’m hopeful this demo will create some headway for alternative ray tracing implementations in Vulkan or something that both AMD and Nvidia cards can support.

I just thought it was cool and wanted to share this with anyone who never knew about it.

I think it’s more likely that it goes through the entire game, like a Doom total conversion. Quake only has so many textures, after all.

It really just comes down to QA and making sure that, unlike the original Q2RT project, all levels look good despite the shift in artistic direction.