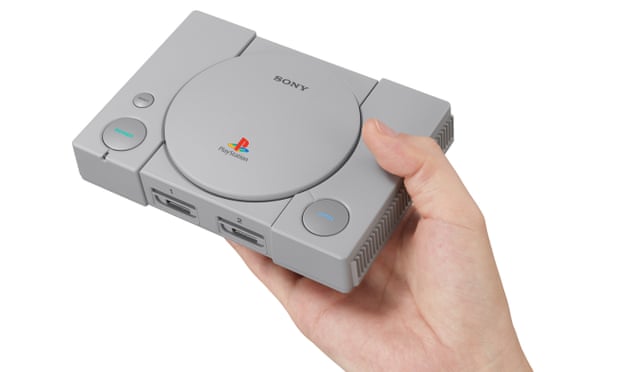 Whilst I wasn’t expecting much, the Playstation was an amazing system that I have fond memories of, and still have my modded PSOne kicking around somewhere, boxed up and nestled away. With that in mind I had hidden hopes that the 20 games on the Playstation Classic would match up to the excellence that was the SNES Mini. But no…

Anyone else feel like this is a somewhat boring and disappointing lineup? If I wanted to play these games, and I didn’t have several already, then I’d just get a PSP instead. Sadly many of the games fans wanted either needed a Dual Shock or were third party.

That’s not an ideal lineup by any means. Only a few I would want to play/replay. Nothing in it that yells at my as if I absolutely need to get it. The only one that I would dive in immediately if I got this would be 6. Intelligent Cube, to see if I could get farther now than I ever did previously… I like to think that my reaction speeds and reflexes are a little better, but who knows…

That Mega Sg looks really good… I still have about 20 cartridges that I just couldn’t force myself to get rid of, and the no-emulation hardware-driven console is enticing for sure…

I actually had Intelligent Cube demo (or Kurushi as it was known here) on a Net Yaroze demo disc…remember that? It was an interesting game that deserves the exposure that it’ll get from this…the others, well many have not aged well.

The Mega Sg certainly seems like a good option for those disinterested in emulation, and is a MASSIVE improvement on many of the other Megadrive/Genesis collection systems we’ve seen peddled by AtGames in the past.

I’m liking several of those titles, but eh overall. I never had a PS1, what would have been the ideal lineup for you all?

I’m liking several of those titles, but eh overall. I never had a PS1, what would have been the ideal lineup for you all?

They should have had Twisted Metal 2 (or 3-5), Resident Evil 2 (just in time for REmake!), LoK: Soul Reaver, ANY TOMB RAIDER GAME… really, the list goes on for missed opportunities and bad calls. Also, Final Fantasy VII? The game that not only takes up four discs’ worth of space, but is already on every platform ever with some par or even superior releases?

Also, who I can’t count the number of times I’ve heard people talk about the PS1 and go “I wanna play Tom Clancy’s Rainbow Six!” That’s because the number is ZERO.

Now to wait for a few months while the N64 utterly crushes this lineup. The bar is very low as it stands.

I’ve only played 3 of those games on the system itself, while 2 others of the list on PC

Is it just me or is that a great idea, to bring out a new console to play the old games again! This Sega looks so good I might have to pick it up. What if this starts a trend and Playstation and/or Xbox do the same thing, then I can play my gigantic collection of Ps2 games on a new system

To be honest I had no clue that this was in development, I read it now and instantly HYPED!

I wouldn’t get too excited. Flashback systems are nothing new, I’ve seen plenty of Atari 2600 ones. Nintendo released an NES followed by a SNES. So far, the PS one seems like a mediocre imitation instead of a worthwhile product.

I’d much rather have a Wii/Wii U style Virtual Console or an Xbox One style backwards compatibility system than a cheap Linux system preloaded with somebody else’s list of favorites for $100+.

Props to Sony for forgetting Crash, Spyro, Legacy of Kain, and all their other classic titles that people would have expected. At least they got Twisted Metal… 1…

I watched a video from IGN about the games and they have a really good point, which is that most of the games have been remastered or ported thus being unnecessary.
At the same time I wasn’t that mad when I first looked at the list, because there are a hand full of games I would expect. Metal Gear, Resident Evil… These are the games I would want to play, but the rest seems to be there for the sake of replayability. What is Mr Driller even?!
The mini consoles recently are more collectors items than actual consoles, so the fact that you can’t play anything else than what you’re given makes them uninteresting anyway. I’m dying to play the original GTA, though. That was my jam back in the day! And you can only get them on Steam via some obsolete Grand Theft Auto trilogy pack or something, fml.

cough* cough… i still play games on both my ps1 and ps2… pretty sure that one day someone will find me dead because i got tangled by wires ( mostly, i play alone but keep the second controller connected, and i keep both consoles connected to the tv XD ) and couldn’t make it to the toilet/kitchen

Damn Rayman, T3, the best GTA and RR Type 4? This lineup is much better than I had expected.
I don’t know if I’ll buy it but it is way more tempting than the Nintendo minis.

Pretty much all my ps1 gaming time was spent on final fantasy 7,8,9 and Chrono trigger. But I always loved me some jet moto and tekken for multiplayer! Anyone remember the “tech demo” that the console came with? The t rex and manta ray models that you could manipulate blew my mind at the time lol

IMO if i was going to spend $100 on a console that could only play the games saved on it I would expect way more than 20 games. My cfw psp2000 has more than twice that many in my pocket

I didn’t have high hopes for it when I saw the non analog controllers. Twisted Metal and Destruction Derby should be swapped out with the sequels which are way better games.

Dual Shock controllers and Ape Escape would have been nice, and I know they fall under different ownership now but Crash and Spyro not being on there is a real shame. Also Silent Hill is missing.

Not a big deal, but definitely not a list of 20 games I would buy a tiny playstation for.

Not a big deal, but definitely not a list of 20 games I would buy a tiny playstation for.

So far I’m the only one to whip up an alternative. There are endless permutations (I could probably have swapped in Tomb Raider 2)…what 20 would you have included?

My list, after a bit of thought and pretending dual shock is on the table. I know things are available through remasters and other systems but if we’re talking definitive list for the system, here’s what I would go with.

I know a few aren’t even all that good but we all have those games that we recall fondly.

I wouldn’t buy it but, of all the games I loved with the PSX barely none are there.

Pac Man World or we riot