I know, I know, it’s old news Epic Games having a 88/12 revenue split vs. Steam’s industry standard 70/30, but it’s been on my mind a bit recently so I wanted to try and gauge some opinions on it.

Is the 70/30 split really that big of a deal in your opinion?

Vote Now! [Yes, Steam needs to be giving devs more from purchases of their software.]

I would’ve used the poll system on here, but in addition to just not knowing how, I’m trying to get this into multiple locations so I can get a wider polling audience.

If you want to know my opinion I’m in the league of “No, but I’d still like to see devs get more for what they do.”

Hard to answer the question you’ve posed “is it a big deal” I don’t know, not sure I really care. The problem I’ve had with this discussion from the start is that Epic went and phrased the whole thing as some sort of moral dilemma and that Steam was being unethical with their revenue split. Then there’s this whole “devs deserve to get paid” thing that’s also kind of missing the point in my mind.

If you create things then it is your right to charge others for obtaining those things, having created a thing does not come with some sort of right to be paid for the work though. Only people who have a right to be paid are those who are doing contracted work. In every other circumstance you can ask a price for your service or goods and if you can find someone willing to pay that price then good for you.

Now about steam and their revenue split then. Steam provides a service, for which they too deserve to be paid, after all that is a contracted job they are doing for developers. Steam is working for them, steam issues contracts to those who would be interested in using their service. A developer with a game they want to sell will have to ask themselves whether entering into this contract with steam is beneficial to them or not.

If they think they can do what steam does themselves for less cost than steam’s requested share is then they are entirely free to do it themselves. Or if they feel that someone else are able to provide a better or cheaper service they’re free to do that.

Do I want to see devs get more for what they do? That’s such an open ended question. Does ALL devs deserve more money? I don’t think they do, there’s a lot of shitty devs out there who don’t deserve jack and there are some who make boatloads of money. Should video game developers the world over pool their incomes and split it equally?

In the end we’re talking about a market place, you bring your goods and services and the people partaking of them judges whether and what they feel those goods are worth. If you feel your goods or services are worth more then you get to try to charge more, the market will react accordingly. If you feel that Steam’s service is not worth the 30/70 split then either negotiate with them or do something else.

To add to what Fraggles has said above, which I agree with, some people (not necessarily you) are acting like what Epic is doing is either:

A. brand new or
B. the best practice any online marketplace has for indie devs.

Meanwhile, over at itch.io…

itch.io is a marketplace for creators of all kind. It’s our goal to support creators by giving them the tools to sell and distribute their work. As a way of saying thanks to those using itch.io, we utilize an Open Revenue Sharing model. (Read about the launch)

You (the seller) can decide what percentage of your sales will go towards itch.io. All money collected is used directly for running servers, paying for bandwidth, and supporting the development of new functionality. You can read more about itch.io’s mission on our About page.

Also there’s zero guarantee the developers of said Epic games exclusives will see more money from the revised split…that’s in all likelihood down to who’s publishing.

Meanwhile, over at itch.io

That’s why I’m putting my game there, you can even put it for free and ask people to give money if they consider it wort it.

That’s why I’m putting my game there

Speaking of itch.io, I need to get back to playing my game…It’s been years it seems 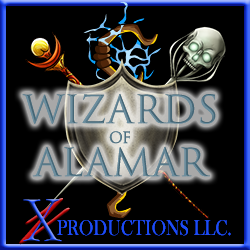 Wizards Of Alamar by X and Z Productions

Wizards of Alamar! Imagine if Zelda hooked up with Metroid and D&D then had a crazy love child! Yeah it is that good!

Honestly even 70/30 is pretty good for hosting your content on someone else’s platform if you look outside the pc gaming industry. Dmsguild is 50/50, Shapeways a flat cost, so it’s technically up to the user, but if you try for better than 10% on most models you’re never going to make sales. Etc. And Steam as a service provides a lot more actual service than the other game launchers, so IMHO they’re justified in taking a larger share than the others. I’m not saying any specific combination of numbers is good or bad, just that they don’t all have to be the same ratio.

Nah, I’m still working on it, is more like a little demo, if people like it I’ll keep working on it otherwise I’ll do something else.
I love the idea of indirect gameplay, It’s a dungeon exploring game, generated like in Bloodborne, but you manage a party that does it’s own stuff based on their training, think FFXII gambit system.

Did you made that game? it looks… hectic.

Nope. I didn’t make it. It was given away over at GGOTD and I grabbed a copy.

Although the 70/30 split from Epic’s part is great and all, their store is still lackluster in comparison to Steam (like, seriously, how does your store not even have a review system?!). IMO, the 70/30 split is worth it when a dev has a game on both Steam AND Epic (or GOG), but isn’t worth it for devs/companies who want to promote their game as an Epic Exclusive.