So this thread of mine is pretty late (and by late I mean CAT was already sold out on the day it came out which was expected) but that doesn’t mean I won’t do the thread regardless!

For those who don’t know, “Coin Game” is a term I’ve created specifically for this community. This refers to games on the Coin Shop. Also, this thread is a play where people can talk about the Coin Games especially for those who are planning on buying a Coin Game and those who want to help other people buy the Coin Game.

The current thing that piqued my interest is Circa Infinity. The game just looks mental as hell.

Cook, Serve, Delicious is a game worth checking out. It’s one of the very very very few time management games (time management as in games like Diner Dash) that has multiplayer in it. I mean, it’s local multiplayer but it’s cooperative and a fun game to team up with a friend on.

Check this video out and learn the concept of “handitize”: 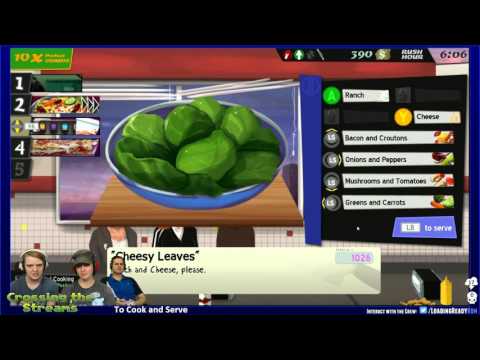 For Chrono.gg’s original description back when it was a daily deal, check out this thread which includes a let’s play video from Northernlion:

Cook, Serve, Delicious! is a weird one. K16 isn’t wrong in calling it a Time Management game but, at least for me, it resembles something else. Its more like… a typing game. Sort of like Typing of the Dead. You have so many buttons to press and you have to press them so fast that it becomes less about actual time management and more about precision than anything else. Once the rush-hour starts, you don’t stop pressing buttons. At all.

It’s incredibly chaotic and extremely fast paced. It can become an absolute nightmare if your reflexes aren’t good enough. That said, it’s quite a fun game, and to some extent you can lower the difficulty by selecting easier food, but that food usually has negatives attached to it.

Would I recommend it? Yeah, I would.

Completely agree with what Natanel said. In fact, Natanel has proven to have played the game to describe the mechanics and controls, and the pacing of the game. The video I showed used several controllers and shared specific duties to simplify things for themselves, rather than have one person do everything and hit ALL the buttons. It’s certainly a different twist on the Time Management game. It’s not go to that table, serve that, go to this table, serve that. I’m enjoying these changes, rather than do all Diner Dash clones. Cook, Serve, Delicious, and Overcooked are games that I consider to be Time Management games, but they’re setup to be the refreshing change the genre desperately needed. Also, I really wanted multiplayer and Diner Dash has only tried that ONCE, and they never went back to it again. And then nobody else attempted it because apparently it’s really not feasible. Well… Until CSD and OC came along.

Well said. I especially liked the part where you were agreeing with me.