May the 4th be with you sale

Sorry first post on chrono.gg community, May the fourth be with you! 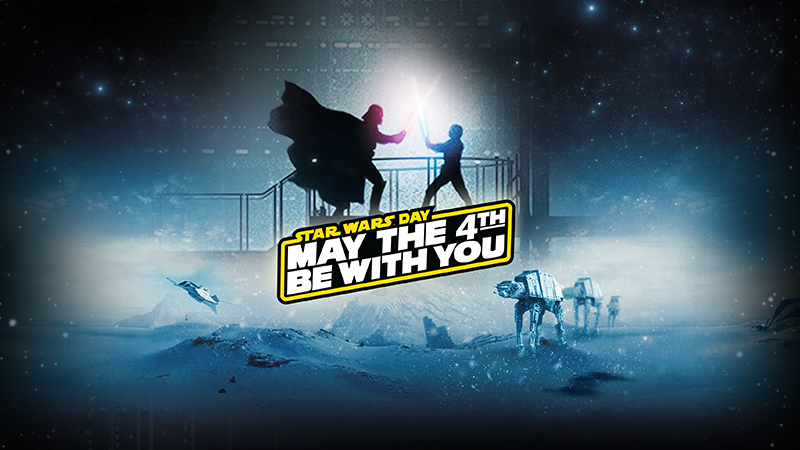 Jump into the action in a galaxy far, far away.

Can’t wait till the finally of Clone wars!!!

Don’t forget that Disney claims copyright over #maythe4th and anything you use with it.

@disneyplus
By sharing your message with us using #MayThe4th, you agree to our use of the message and your account name in all media and our terms of use here: https://t.co/G0AyToufQ5
12 Likes
THEFIREGAMER123 May 4, 2020, 4:31am #4

Geez, soon we probably won’t even be able to say may the fourth without owing Disney money. We might even have to skip May 4th every year. May 1st, May 2nd, May 3rd, May 5th, etc.

While Disney’s usual legal heavy handedness is never something I’d defend this time people intentionally ignore the part where you have to actually send the message directly to their twitter, just getting people worked up about stupid shit for no good reason. They did in fact not attempt to claim rights to every message using that hashtag.

May the fifth still sounds close, so we would still have that

Never thought of it again. And to think I was above it oof. They did mention when they send “to us”, meaning to The Walt Disney Company. This reminds me of that one tweet Twitter made regarding the whole “age is just a number”. The context was that it was just some joke about some old dude who managed to get something accomplished in the end. I don’t exactly remember but everyone took it out of context to where they assume that Twitter is instead advocating to, without directly referencing it, people whom is very hated amongst the users on the website.

This generation is so dumb, cant even read and comprehend 2 sentences.

Disney copyrighting May the 4th is absolutely hilarious. lol

I actually received an email from them:

I guess the moral of the story is don’t tell Disney anything or else they might own it. yaaaaay. That makes it better now.

This is also an overstatement, they do not claim ownership or copyright on your story, they reserve the right to use your story. You maintain copyright on it but by sending it to disney you grant them unlimited license to use your story and name in “any media”. The “somewhere special” mentioned is going to be something they are planning to create which may contain the stories and messages they get sent, so only send stuff you want for them to feature in whatever this is going to be.

I mean I understand that disney and copyright is a big issue and their VERY broad statements here are uncomfortable and I for sure wouldn’t be sending them anything worth a damn. I’m not accusing you directly of rabble rousing, but I’ve seen this being passed around with less and less context and more and more obfuscation to make it sound as if disney are trying to copyright the idea of 4th of May entirely and that’s simply not true.

Remember old TV shows that used to ask people to send in postcards or letters and stuff? Yeah this is pretty much that. Send stuff to companies for the express purpose of having it featured means you grant them the rights to feature that stuff.

This is harmless and reasonable and I just wish people would spend all this energy on talking about the actual nefarious shady shit Disney really are doing.

What you said is correct and is already possible on the twitter TOS. Anything posted on twitter is already public and can be used by anyone. Even companies. But Disney went a step further and tried to place their own TOS inside twitter’s TOS. It is so ridiculous that they would try.

But the main problem is, everything on twitter is free for public use. Disney says they own anything tweeted at them with #maythe4th and nobody else can use it. But Disney can’t own those tweets because it’s on twitter.

Also Disney, ever so ready to DMCA things, has already used the DMCA on twitter to remove the screenshots of the those #maythe4th stories on other people’s twitter profiles. Disney going so far as to stop others’ use of #maythe4th content, make possible money from #maythe4th content, and protecting it as though it is theirs is basically a grey area of copyright.

But we all know twitter won’t stop Disney and enforce their TOS. We also know Disney can’t enforce their ownership of the #maythe4th stories on the entire internet. So this is just a crazy story to make fun of. Nothing serious.

Here’s the full tweet chain that people are cleverly changing so that the last tweet doesn’t show. (Edit It’s also interesting to note how large a difference there is in engagements with the 2nd and the 3rd tweet, showing where people are clearly being lead to engage with this.)

I don’t know if you’re talking about information coming from somewhere else but the parts you have included here yourself states specifically that they do NOT purport to own your submission and the thing you quoted at the end is actually pretty clear.

They want a “non-exclusive” license (This means they don’t claim to be the only ones to whom you may grant this license) to pretty much use however they want whenever they want the things you submit to them and that they also can provide this license to any 3rd party they wish to involve.

As far as Twitter’s TOS regarding everything posted to Twitter being for public use… this I do not know anything about or care to check up on but it doesn’t seem to contradict anything that Disney is doing here. Disney is only further covering their own arse mostly by habit than anything else.

Now if they have indeed DMCAd other people for using tweets sent to them under this thing then that is definitely both against what they claim here and the fucking law as well as I suppose Twitter’s TOS. So that I will wholeheartedly condemn, but that’s not the “story” that’s been going around and thus not what I’ve been talking about.