I.E. I don’t have those games and they’re guaranteed to be the cheapest here

so I think I’ll get the middle Tier, as I already have stellaris, thank you humble bundle

but I had to miss a few monthlys, so I ‘ve missed the pillars of eternity month before :’(

I also care about buying the whole game, I hate having to buy DLC later. Not to mention playing a game then DLC comes out later so I have to go back if I want to get the best experience and if the DLC is suppose to start at a point I’ve already passed or breaks something about the early game because it assumes you have already played it, ugh.

I feel exactly the same. Although I do have to give Paradox the credit they deserve, while they do churn out an awful lot of DLC for some of their games they are for the most part actually good pieces of content and more akin to expansions than the pisstakes we tend to expect from most other publishers. The games also do tend to be in complete states in their own rights.

But with all that said I still have a kind of hard time with it because it just feels bad to buy “half” a game even if that is not strictly true, there’s still this lingering sense of dissatisfaction with the whole thing.

TotalBiscuit released a video about it recently if you like his kind of review, I have not watched yet, only seen the game popping in steam a while ago, didn’t even know it was from Trine devs. 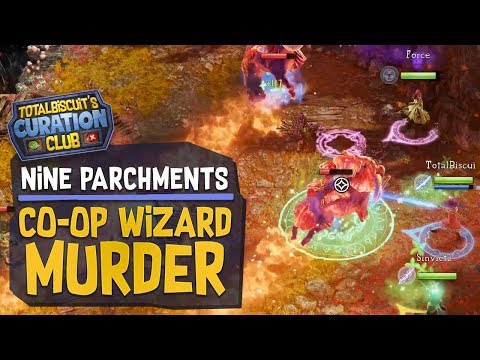 Only thing I know about Nine Parchments is that it has (had?) some problems with DRM, even in the DRM free version.

Download the best games on Windows & Mac. A vast selection of titles, DRM-free, with free goodies, and lots of pure customer love.

Oh & something about some of the hats you can gain in game are restricted to online/co-op mode only. Handy if you do that, but some folk dislike online gaming.

Booted up Pillars of Eternity. Forgot how in-depth cRPG’s are. I have now finished creating my character

about the time it takes me just to decide a name