Well here’s a little bit of a surprise but the latest humble bundle is actually kind of good. Maybe IGN is trying to lull us into a false sense of security before the trap springs or something.

Pay what you want for a bundle of awesome games and support charity!

Epistory
This is the one that kind of got me to bite on this bundle. It’s a typing adventure game with a really cute papercrafted graphical aesthetic. Been on sale here on chrono.gg not too long ago.

Prototype 2.
Eh, well AAA open world game of yesteryear. I never really played any of those titles so maybe it’s worth a spin at some point.

Kingdom New Lands
Ah well, now I’m actually quite pleased I managed to dissuade myself from buying it here the other day, sorry chrono.

How to survive 2
Anyone want to play it in co-op? That seems to be the best way to find enjoyment in this so-so title.

Wasteland 2
Quite a good game if you like old classic RPGs or original Fallout. It’s the sequel to the game that fallout wanted to be the sequel to after all. I of course did not go for the top tier as I already have the game, but it’s certainly worth $10.

Anyone have anything else to say about the titles I omitted or something more about the ones I didn’t feel free to have your say below.

once again (to me) the tier1 blows the 2nd tier away price to value-wise imo
but we don’t have the “Mystery unlocks” yet, so next week will definitely be interesting to see

Epistory for 1 dollah, yea, wow, that alone would be enough for me even if already owning grey goo, or if ignoring Oddworld New ‘n’ Tasty

i bought wasteland 2 here for 12bucks i think, -getting it for 10$ + the rest of the bundle, is a total steal imo
it’s a fantastic rpg, the 3rd can’t get here fast enough

prototype 1 was okay fun enough for what it was, but might feel a bit novel these days, and get worn out fast, but the mass slaughter could be fun in bursts i guess if that happens. Don’t know about the sequel, never played it, since it’s an acitvison game, i’m gonna guess “more of the same”-as the first lol

Thanks for mentioning the bundle - The Tier One is definitely worth looking at. I’ve owned Grey Goo for a while now and it’s a brilliant opportunity to try get some family and friends to join (I mean, it’s $1). Not to mention the other epic games too!

Maybe it’s because I’m from South Africa, but I actually struggled to find Prototype 2 for sale anywhere (most retailers seem to not sell it or “not available in your region” for some reason), so it’s a good opportunity. Wasteland 2 is also brilliant. I’m eagerly looking forward to the mystery games too

If you see any games on here that catch your eye, definitely worth buying the bundle

I’d probably like to try Prototype 2 but unless the extra added games next week are great I’m not going to jump on board (because funds…). I got muddled up with time zone differences and missed the opening price volatility, so whilst the BTA tier isn’t a bad price for something that I’d like to try, (but ultimately may end up to be very repetitive) It’s probably best just to sit on my hands for a week.

So, what’s the deal with Oddworld New n Tasty? Why is it not included on the list? Does it suck? I bought the tier 1 bundle and am wondering if I should bother to install it. Never played any of the Oddworld games before. Seems to have gotten pretty good reviews

(but also that the 1$ tier would be worth it, to me imo, if it had just been Epistory on its own)

i haven’t played it myself, but if it’s anything to go by the old games, (which were utterly awesome imo), -since it’s a remake, i’d assume it’s gonna be equally great just more “high def” than before, and whatever new extras they added in

the (old) oddworld games are great, and hilarious (can’t count the amount of times i killed myself on purpose just for the giggles), can’t see any reason why this shouldn’t be equally wonderful too, with such a great template

Oh, ok. I thought maybe he intentionally excluded it from the list and you were also ignoring it for whatever reason

Looks like a fun 2D puzzle/platformer. Never would have bought it on its own, but it’s nice to get in a bundle. Really just wanted Epistory.

There’s plenty wrong with it Gnuffi and I will just leave this here: 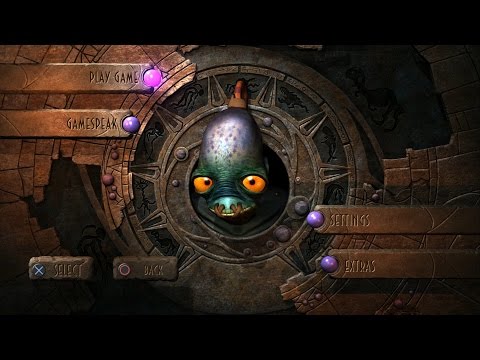 My favourite youtuber that actually knows what he is talking about. At the end he said something among the lines of “it walks, talks and acts like abe’s oddysee, but doesn’t have the same feeling to it…”, but it’s a still a great game for people that haven’t touched the series at all

Definitely buying it for Oddworld.
The more recent bundles have been better than what the site has previously offered in like the last year.
It may have been sold off to Satan but at least Satan’s good.

I snapped this one up too, couldn’t pass up Epistory, Oddworld and Kingdom (which I really regretted not grabbing on Chrono). Pretty happy with Prototype 2 as a bonus too as I was wanting to try the series but didn’t think it was worth actually buying. I’m hoping it’s kind of like Crackdown, but that being said I bounced off 1 and 2 'cause they got really dull after a while (collect agility orbs, mess bad guys up, repeat- not much variation). Kind of torn about keeping How to Survive 2 though. I’ve wanted the first one for a while but as @Fraggles said the second one seems to only have value as a co op game. While there’s nothing wrong with that idk if I can feasibly co op as I suck and am terrible with people online

. Be an easy decision if people I knew irl had any kind of interest in it.

On the topic of HB quality, I’m curious to see what the Monthly games are- I think they’re due on Friday. Be interesting to see what the quality is like given the early unlocks this time around. I’m wondering if The End Is Nigh will be in there as it was added to the Trove recently and I’ve noticed a pattern of unlock games being in there. Either way, I hope the recent weekly bundle quality is reflected 'cause it seems like this month is going to be a bit of a kick in the nuts for Humble subscribers otherwise (although having said that, I subscribed for this one because it was cheaper than a month’s ESO membership for a few bits I wanted to have/do).

So the dregs has been revealed.

Original Wasteland
Yeah thanks for that. Ancient game that is included as a freebie with Wasteland 2 on gog, definitely a dud of an inclusion.

Bard’s Tale
Also old, not quite as old as Wasteland though. A pretty funny game too but it’s certainly showing it’s age. It’s kind of amusing that this is a remaster that could really do with a remaster.

TormentorXPunisher
I don’t know about this one, sold on chrono recently and had a spiffing animated logo. But the game does not seem to appeal much to me.

Yeah thanks for that. Ancient game that is included as a freebie with Wasteland 2 on gog, definitely a dud of an inclusion.

included in the wasteland 2 steam version too, which they are even selling in that bundle
so unless people that buy tier 3 remember to activate Wasteland 2 first, they are effectively wasting a key if they activate wasteland 1 first
-color me not impressed by that move…

for the remaining mystery unlocks, well, personally i’m not impressed enough to be interested in tier 2 now still either

glad i got epistory for a buck tho, tier 1 is insane value imo

It’s always fun to be early to one of your late night posts as they start their life as a horrible mangled piece of text barely recognisable as a human attempt at communication. But then it twists, pops, bends and seemingly crawling out of it’s own arse in front of my very eyes to slowly become something not only readable but understandable as well. But there is something a little lovecraftian about it’s birth into the world, an ever present memory lingering, haunting the mind of any spectator for eternity.

Or maybe I’m just inspired by the deal of today…

(i’m just glad i manage the edits within the 5min timeframe, so not all people can see the X+ edits i have to make, to put 2 sentences together at times)

This is too funny. I wish I could see the edits.

birth into the world, an ever present memory lingering, haunting the mind of any spectator for eternity.