Just like the title says, this time we have the “Humble Bob Ross Bundle”
It seems pretty neat, and is a mixed bundle consisting of drawing books, Bob Ross episodes, and some art games.

Pay what you want for a bundle of creative content and support charity!

Everyone needs a little more Bob Ross in their life.

i saw it and couldn’t help but immediately laugh, (because Bob Ross is too chill it becomes hilarious), but not all that interested in the bundle content myself tho
reminded me of this (because saw it recently again for Nice Peter’s “Bob Ross bit”) 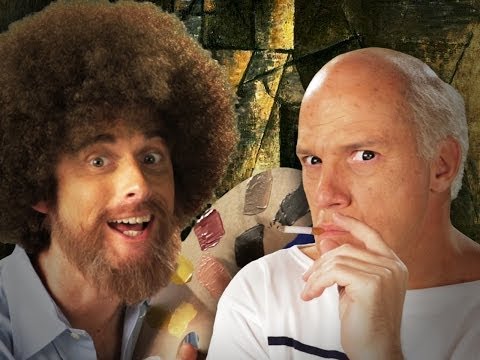 Everyone needs a little more Bob Ross in their life

i honestly agree with this,
if youngsters, or people, haven’t seen Bob Ross “in action”, i highly recommend looking up some of the zillion youtube painting vids there are of him
-either you’ll have a nice relaxing mellow time, or at least a good laugh here and there

and remember; “shake it off, -and just beat the devil out of it”

Just the other day I watched a couple of those videos and oh my… he’s so sweet.

One day I’ll do It, I’ll buy on a whim loads of Bob Ross merch and make a crappy painting following a tutorial, at least once in my life, definetly on my to do list. Maybe as soon as when I move out

hahaha, can’t wait to see the result of that

they are not xD it has 1970s graphics xD

Hahaha thankfully your eyes are safe for now, It’s not happening in the near future for sure.
But I can find you online, not so many cows out there… be careful what you wish for.

I have no idea who Bob Ross is…

A guy who likes happy little trees that he doesn’t like to leave alone and beating the devil out of a paintbrush. “We don’t make mistakes, we have happy accidents”.

Thanks for the heads up. @Vindace

Arin Hanson said he used to be a drill sergeant

and Wikipedia says he was in the military.

I think I read somewhere that his official biography notes that when he left the military he decided that he didn’t want to have to yell at anyone ever again, hence his cool-as-a-cucumber demeanor and general amiability on the show.

word for word what Arin said, but his was a quote from an idiot whereas that is a real quote xD I didn’t know if his was trustworthy xD this is coming from the guy who doesn’t know youtube has polls xD

He also didn’t have a natural Afro. He permed it after getting out of the military to save on soap, and then his show took off and it became instantly recognizable. He regretted it, because he was never allowed to change his hairstyle after that.

This is pure gold!