Here's Some Good News for @Fraggles

A remastered version of the classic stealth game Mark of the Ninja headlined a quick video presentation of indie games coming to the Nintendo Switch this spring, summer and fall. A bunch of cool-looking games were shown, but there were no shock...

Or did you already know this, @Fraggles?

The game is perfect the way it is, what are they possibly hoping on improving?

what are they possibly hoping on improving?

“people must own the same copy, on all platforms”

tho i’m guessing in part because of the switch’s success, (to excuse the switch’s subpar hardware anno 2017)and be the portable device, for which “low requirement” indie games would probably be perfect to accommodate for mobile gaming, to which some people would likely find it easier to swallow buying another copy of a game they own, to be able to play on the go -more sales

also since it seems “small titles” apparently has a 20x as big success on Switch compared to steam these days, might just boost a studio a fair bit enough to validate a port(i’m gonna presume nintendo also curates both a ton more than steam, but prob also even >sony these days

),
(i’m also guessing the format of Mark of the Ninja makes it fairly attractive to port to switch over something like Doom(that i’m guessing did it “just because”), or something obscene(or maybe even unlikely to happen?) like an RTS or even more “complex” mechanics)

“people must own the same copy, on all platforms”

It is not Skyrim

“Mark of the Ninja Remastered, a new version of a stealth game we liked a lot when it launched in 2012.”

This “exclusivity” for Nintendo Switch did not last long. They just announced that the remaster is also coming to PlayStation 4, Xbox One and Steam

The critically acclaimed stealth platformer is back and slicker than ever. Mark of the Ninja: Remastered will feature fully redone 4K visuals for both gameplay and cutscenes along with enhanced audio and new particle effects. It will also include the Mark of the Ninja Special Edition expansion content and be released for Nintendo Switch, PlayStation 4, Xbox One and Steam. 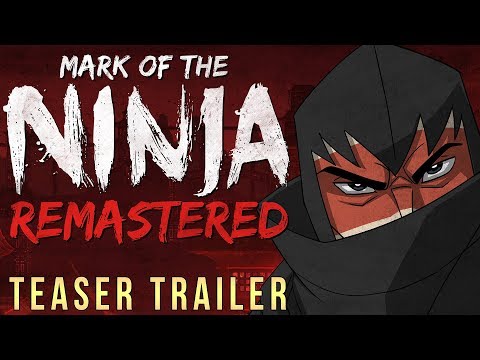 I wonder if owners of the original will get the ‘remaster’ or if this is an opportunity for me to reward klei with a bit more of my hard earned cash.

they should just give you a copy for all your free

hell, even some actual royalties could maybe even possibly be on the table with that much promotion done

Here’s RPS take on “The Remastered”:

Mark Of The Ninja: Remastered sneaking onto PC too

Swell side-scrolling stealth game Mark Of The Ninja is being snazzed up for the release of a 'Remastered' edition. The …

so for some reason i got this free ?

and even stranger on my list it says @Fraggles don’t own it yet (assuming didn’t get it free(yet)), and i began to wonder how that could be ?
steam just not updated yet, or somehow i, one of the most unworthy, received this great bounty while the most deserving Ninja Mark champion did not ?

(srsly tho, anyone got a clue why i got it for free when apparently not all Mark of the Ninja owners did?, could it be a glitch maybe even?

hm, when i look for it in steam search it doesnt say i own it, but when i go to the page itself it says it’s already in my library AND it does not show me that any of my friends actually own it (not even u gnomey gnome), so i guess that means everyone who owns the game does in fact own it, including Frag-ile Fraggles

(dude, in my excitement to install the remastered version i uninstalled the base version only to find out the remastered one hasn’t even launched yet, rofl, now i’ll have to remember to install it somehow when it does launch, lol)

idono, mine did show a couple of steam friends listed as owning it (tho you weren’t among them either), that’s why it was a bit strange “why only some”

it’s not a glitch and get to keep it

yea i took a minute or two looking for the install button too, couldn’t really figure out why it wasn’t there ahahah, hadn’t notice it said “13 days” on store page

Those who own the Special Edition get the Remaster version for free. I have it too.

I got it for free too… It shows up as you owning it as soon as you visit the store page for the first time, if you already had the Special Edition before hand.

When I first checked, only Punkster had this. now several more people.

Yes the remastered edition is in my library as well. I’m assuming it got a little messy because they decided to ‘overwrite’ the original game’s store page (214560) with the remaster while the remaster also has it’s own page (860950). You can’t buy the original anymore and since you only get the remaster for free if you have the DLC they probably just rolled it out in waves.

Right now it shows me that 15 friends owns the remaster (860950) and those same 15 friends owns the special edition DLC (239570) which they’ve made unreachable through steam. Steam trying to tell me this game doesn’t have DLC while it’s sitting there in my library clear as day.