Getting back into Warframe

Okay so somewhat on a whim I decided to get back into warframe again. I used to play it pretty heavily waayyyy back before I was married or part of Chrono. But, due to it being on my family PS4 and therefore not going with me when I moved out, I hadn’t touched it in years. With that in mind I’ve found out that many, MANY things in the game have changed and expanded upon.

So, would anyone be happy to give advice or bring me up to speed somewhat? I last played when the equinox frame came out and now there’s a whole different way to earn parts and frames, a free roam city, fishing, and all sorts of other things. It feels overwhelming trying to go back into it blind, so if someone wants to play as well or is more up to date on what’s new and where to go I’d appreciate it.

Will be an interesting discussion to watch. Never played it and wary of MMOs these days, but darn if the game doesn’t look and sound great! Very polished.

After all the thinking I may download it to see it again as i haven’t played it in a year or so, and i heard there are a lot of new and improved stuff in it, but i’m afraid i’d get burned out again soon from all the grinding i know i’ll have to do, we’ll see. It’s pretty in depth with all the new open world stuff and the new railjack they added recently, that i’m interested seeing how it it.

Let me know! Jan. 2015 was the last time I played before a few days ago, and I’m sad that I have to start unlocking everything (including all the prime frames I had) again. I have heard some of the grinds, particularly for rare schematics, is a bit easier now.

I’d be down to play sometime too if you want

@Danacscott everything I’ve seen from these devs have been great. Assuming it’s still the case now, all updates are completely free, and when farming rare items and blueprints, you can even sell them on an open trade system for the premium, paid for currency. I do know theyve actually changed mechanics in the past that were too much like a “slot machine,” when they realised players were spending large amounts of money on certain randomly generated kubrow (attack dog/pet) skins.

Well, I’ve been playing for an year since Febraury 2019 and so far many things happened since then:

BTW, my nick there is TheCheshireGuy_ and I’m part of a clan called “Piece of Cake”. I’m currently MR21 and I’ve been seriously growing bored of this game.

TL;DR Catch the full reveal Aug 01, during TennoLive @ Twitch and get Hydroid Prime free… if your account has been properly linked. Please note that there are some caveats…

Get Hydroid Prime for free by tuning in on Twitch or Steam for 30 consecutive minutes during TennoLive, starting at 5 p.m. ET. Plus, watch any TennoCon panel on Twitch or Steam between 12:30 p.m. and 5 p.m. ET to get the timed-exclusive Athodai hand-cannon, reverse-engineered from propulsion tech to pack a serious kick.

Hyped to get that! I’ll be cutting the hand cannon close as I’ll be working, but Looking forward to the hydroid at least.

@carvalho20ptc Seems like tons has happened in 1 1/2 years. Sorry that you’re getting bored of it, would you say it’s still worth going through, especially if you are going in fresh?

Yeah, it’s because I’ve only played this game for a long time, and now that I have more options I want to try something new for a change.

Anyway, if you’re going back, I can suggest that you take your time to learn everything, do things at your own pace and make goals for yourself, like I want to make X platinum or get Y amount of weapons and frames. Don’t rush stuff and have fun, and like I said don’t just play only Warframe but diverse your options.

That’s fair! I was hoping to farm for Loki prime but it appears it’s been vaulted, so that sucks. It was my first prime frame and was given to me by a veteran as a gift. Boltor prime and glaive prime were my first prime weapons, sad to see those are locked off too.

I don’t have near as much time to play now, so I don’t think I’ll burn out too much.

Edit: looking through it seems most of the prime weapons and frames I used to use have been vaulted. I’ll have to look further into what’s available now.

Yeah, Loki has been vaulted for a while, and it was very pricey to get his systems, heh.
My first prime was of course Rhino Prime, since I loved him back then, buying his set with platinum. Until nowadays it’s one of my most used frames. My first prime weapon would be Orthos Prime, which now requires MR12 to be used after melee 3.0.
Another frame which went there recently was Limbo Prime.

That’s good to know. And like I said take your time.

You should take a look at the void relics menu, since it’ll give a clue to where to start.

Took me FOREVER to get Rhino Prime.

Lol I do know that I need to get back the best sidearm in the game, TWIN GRAKATA. Add some extra firerate and capacity mods and let it rip! So much fun to use.

I believe he was unvaulted either this or last year and then went back to the vault. I still remember how much I paid for the set back then: it was around 280 platinum.

Yeah, it’s one of the best, together with Aksomati Prime, which is one of the weapons I forgot to mention in my list.

I played it a few times though I never really got into it. I have several friends who play it a lot though

Will do, i got into it yesterday for an hour and i was already confused

I forgot what frame does what, what my weapons are capable of. New missions, interface and stuff. I need to get used to this again.

@GeekInUndies Thank you for the info, hopefully i don’t forget about the event. Also i’m not sure anymore, do you get a new slot for the frame or i have to buy one first?

Also i’m not sure anymore, do you get a new slot for the frame or i have to buy one first?

A slot usually comes with event giveaway weapons and frames

Thank you, haven’t received a frame in a while so i forgot how it works.

BTW, my nick there is TheCheshireGuy_ and I’m part of a clan called “Piece of Cake”. I’m currently MR21 and I’ve been seriously growing bored of this game.

I’ll send you a friend request. and yeah I was NOT expecting Jackal to be that awful, especially for a “low level” boss.

Thanks for the request, but yeah: unless you have Wukong or Titania and have unlocked “spoiler mode” you’ll struggle against this boss.

Just like what happened to Jupiter, this is DE playing straight the following saying: “If it’s not broken, don’t frigging fix it”.

Warframe is a weird game.
On one hand I really like it but on the other hand it has some serious issues. I feel like Warframe is built on 4 main principles:

Generally speaking I see 3 major problems with the game:

And for sure there is quite a bit of usual f2p bs smuttered above. IMO it’s a variety-based game but you have very few weapon and character slots (additional can be purchased with plat which is real-world-buyable currency). Plus there’s a usual bunch of other mechanics like “wait 3 days til the crafting’s done” (look, you can skip it with plat). A bit of fear of missing out is in use as well with all those “limited time offers”. And when you visit the market to buy a new weapon blueprint - buying weapon with plat is posted front and center while the ability to buy it with in-game currency is hidden a bit deeper.

Overall I believe TotalBiscuit was right on the spot with the following idea “it’s a great game if you like how it plays but if you want to get something specific (like al high-end weapon or character) and are adamant about not spending money… it may be a pretty miserable experience”.

For me it’s a really nice game as I like the combat, I like trying out new guns and frames and progression just happens for me naturally as I play with my new toys. It does not happen fast since I don’t play that much but new stuff unlocks at an OK rate for me so atm the game keeps me satisfied. 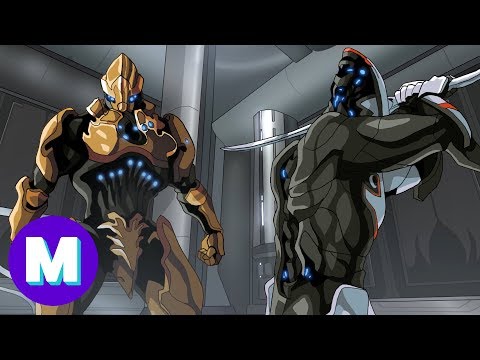 Well that was great. And not really wrong either.

I think your points are really
Good. I will say at least once you start farming prime parts you can sell those to other players for plat, and as you get better you can sell more to get plat and therefore use it more. That was my past experience anyways, seems to still somewhat be accurate.

As someone who easily finds themselves sinking tons of time into games if they aren’t careful, having to wait out the crafting times can be quite nice, especially as it gives me a reason to actually stop and go to bed/get some actual work done on sick days and what have you.