I recently picked up my very own flightstick-- I haven’t owned one in over a decade, and it was never my own, so it’s been awesome going back to all sorts of old games minus a console controller. I might as well ask, what’s the general favorite, if any? I’ll start off easy by something that can easily be topped, a Logitech 3D Pro for $35.

It’s cheap, reliable, and… well, cheap and reliable. It sticks to the table nicely with its rubber feet, just the smallest amount of pressure on the base (as in, hand over buttons ready to press) is enough to keep it 100% grounded and un-tipped, and all axes feel pretty smooth. Not a fan of the throttle, but that’s what I get for cheaping out and not going for a full HOTAS.

Aside from that, you’re probably not buying this to play MDK or CoD on it. Whether it’s the original TIE Fighter/X-Wing games or Elite: Dangerous, there’s quite a few titles that make great use of these devices. Any favorites, might I ask?

I’ve been wanting a flightstick or rather a full HOTAS setup for a long time now, but there’s not a lot to chose from out there. Wssentially you have 3 tiers: The Saitek x52, saitek x56 rhino and Thrustmaster’s Warthog system. All pretty pricey and all of them seem to have their own share of flaws and potential problems. I just have not really gotten to the point where I felt comfortable spending $250 - $500 on a product that may or may not work properly after a month.

Yet I still yearn for it, I want to play Elite Dangerous with a hotas setup, anyone got one to lend?

With Mad Catz shutting down though it’s looking like Logitech is taking over the brand of the saitek sticks, not sure what’s really going on there. Maybe Logitech will improve the build quality? Suppose we’ll see how that turns out.

My only joystick was Microsoft Precision Pro when I was in high school, got it for Mechwarrior II type games. Aircraft/space combat games wasn’t my jam, but I had a lot of fun with it.

No offence meant here but is there many games you can use that for that are not flight sims etc? I am genuinely curious.
It looks a sweet stick like. My last one was a Cheetah Joystick used on my Amstrad CPC-464, although I’m not sure that counts.

That counts, points for targeted marking with a nostalgia nerd.

Flight sims make up the bulk of supported titles, but there’s quite a few to pick from, especially when you look from 1990-2005. That said, Woolie from SFBP inspired me to be an idiot and try replacing my keyboard with it, using a proper mouse to play alongside a flightstick in FPS’s and other fast paced games… and it works quite well, actually! My stick is actually D-Input though, so you need to use a wrapper to convert that to proper XInput for most modern games.

A full HOTAS would have been nice, but that was just a bit above my budget at $55 for the Thrustmaster model. I’m not a fan of the rather small throttle flipper on my Logitech stick, but it gets the job done and you get what you pay for.

EDIT: I’m a complete moron, and forgot to mention Mechwarrior and other mech combat games that allow joystick movement! Thanks for the reminder, @bhoylhogro, I’m downloading Earthsiege 1 and 2 off of Hi-Rez’s website as we speak!

Dat is my flight-stick of choice >w>

That’d be a Joystick rather, wouldn’t it?

Haha yeah ;p but a big one XD

(Hope this will make some people laugh though <3 )

“That’d be a Joy Stick rather, wouldn’t it?”

Fix’d it for ya friend-o, no need to thank me.

Now to un…de-rail this topic, besides you guys making me want to spend money and get one and play flight and mech games ‘n shit…that Logitech one that @CptMold started the thread with, that’s an entry level one, huh? And this HOTAS stuff is top tier? So what’s in the middle and are there any other uses, also can they be plugged in and used for vehicles in fps’ while using M&K otherwise?

The Logitech 3D pro is actually mid tier, there are a few thrustmasters in the same price bracket, I have heard good things about the Thrustmaster 16000M and the somewhat cheaper flightstick X seems like a decent plain joystick. I wouldn’t recommend going for anything below that level though as it’s likely to be absolute shite.

Something worth checking out is http://www.chproducts.com they are focused mainly on the flight sim enthusiast market so you don’t see them much among the flashier ‘gamer’ oriented products. They’re not entirely easy to find, especially not in europe, but you can order through amazon if you’re in the US.

HOTAS is definitely better (at least, for 90% of people), but not ultra-high tier. Also, $35 probably isn’t mid-tier for joysticks… midtier is probably around the $60-80 mark while the high tiers are anywhere from $100-650.

Anyway, HOTAS stands for Hands-On-Throttle-And-Stick, aka having an actual throttle handle instead of that crappy little pinball flipper you see on my Logitech one. Here’s an example of a [relatively] inexpensive Thrustmaster HOTAS for $50: 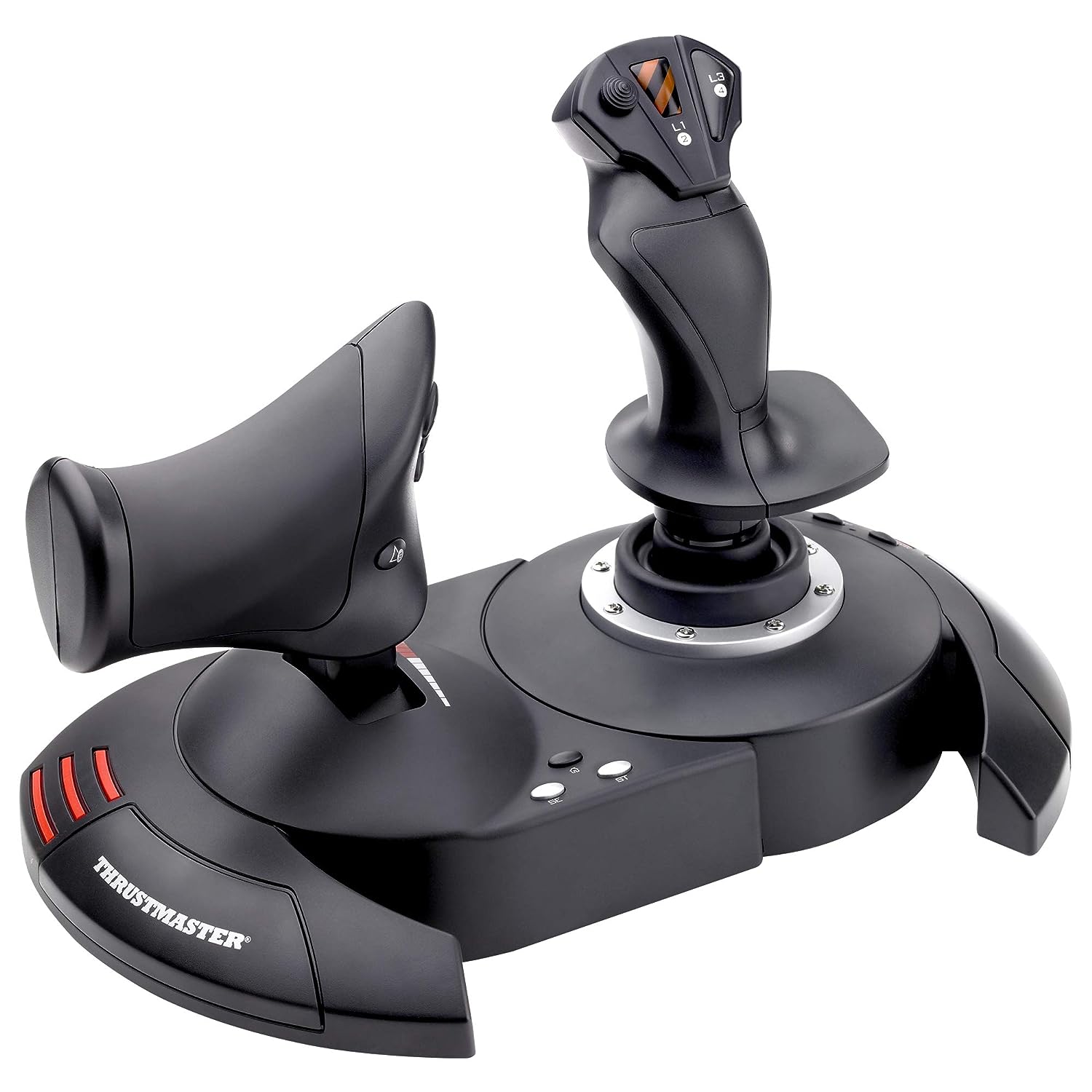 Thrustmaster is a designer and manufacturer of interactive entertainment hardware and accessories for PC and game consoles. Wide hand-rest for optimal comfort. Programmable: the 12 buttons and 5 axles are entirely...

Yes, you can combine it with mouse and keyboard the same way people like Woolie from SFBP will take a controller and mouse. There’s only two things that can get in the way.

a) It needs to support controllers, and more importantly, switching to controller on the fly. Even then, you can run into bugs like the HUD switching from Xbox to keyboard prompts and back endlessly.

b) XInput or DInput? My Logitech device is DInput, so I need a wrapper to actually make it work with newer games that don’t support the older style controller (pretty much everything after 2007). It works quite well in MDK out of the box and maybe even with Half-Life, but there are wrappers like XInput for any modern games you want to use it in.

Most of the time, the joystick acts like a left thumbstick, so you’re set already! Just bind the buttons to Jump and other actions that would normally be covered by Q,E, Tab, Ctrl, etc.