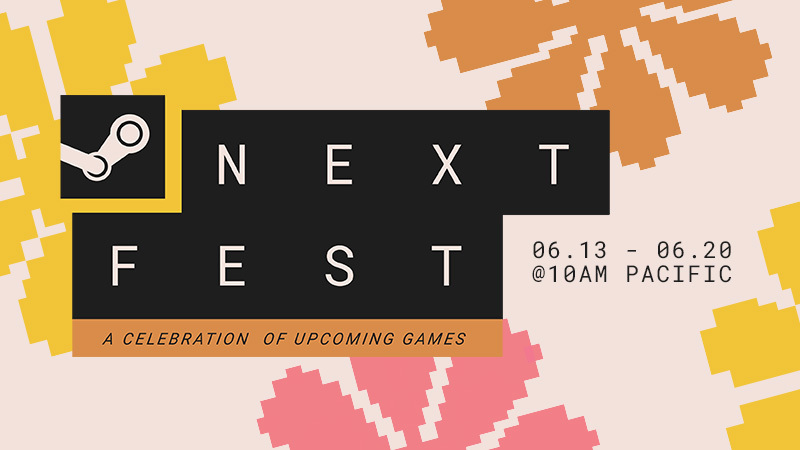 Steam Next Fest is a week-long celebration featuring hundreds of FREE playable demos as well as developer livestreams and chats. Players try out upcoming games on Steam pre-release, developers gather feedback and build an audience ahead of their...

To get a badge all you need to do is to install and play/idle any of the demos available of the upcoming games in the main page.

Play any demo from Next Fest to unlock a badge you can feature on your Steam Profile.
Level up your badge as you try out more demos.

As you can see I got the badge leveled to the max by only playing 11 demos for a few minutes.

By using the steamDB install-Cancel trick to just register the demo license and not having to actually install anything, then running idlemaster with the App ID this badge is very quick to level.

Not that it matters, since there’s no additional Xp earnt.
And annoy your friends with activity feed spam.

I played nearly 45 minutes of a game, and nothing happened. No badge notification?

@Fraggles I did the same but with ArchiSteamFarm.
In very few minutes I’ve maxed the badge as you can see in the screenshot.

@Danacscott Try opening the same or another demo listed from the Next Fest again and pay attention to the “badges” page. I had the same issue at first but I did so and it worked.

I just installed, opened, closed immediately, checked profile for progress, uninstalled. Rinse and repeat. You don’t actually have to do anything more than that. Try other demos if one is not triggering the badge or upgrades. That being said, the steamDB trick sounds even easier than this method if you are familiar with how to use it.

Another tip if you are installing via Steam: Make sure you pick games that aren’t that big so they download in a few seconds or less and you aren’t waiting too long.

Another tip if you are installing via Steam:

The whole point with the steamDB link to ‘install’ and then cancel the install is that it still registers the package to your account so that it can be idled. This way you don’t have to waste any time, or bandwidth to actually download anything.

No badge notification, you do have the badge though. Just check your profile.

Ah. A whole Frags is quite correct. That I do. I expect a pop-up or something. All good then. @carvalho20ptc Glad you got it too and thanks for the helping thought.

Look at old fashioned me, actually downloading and playing the demos.

I did a 50/50 kinda strat. I downloaded and played the demos of games on my wishlist. The rest I just farmed quick.

This is also a good opportunity to fill your wishlist, which I gladly did.

When is it ever not filled?

So I have tried out the following games and have these opinions:

Terra Nil
Different than what I was expecting, I was expecting a slower paced game. But otherwise the mechanics are fine and I happily played the entire demo cough tutorial. Their definition of “controlled burn” needs some work. Might be worth a wishlist.

Turbo Golf Racing
Rocket League but golf. Basically best way to describe it. Also, it’s a free-for-all, no teams. You can make parties by the looks of it.

Sweet Transit
I got rather bored with this one. It’s city management, but you also have to manage how many stores are nearby, how many train stations are nearby. I just wasn’t excited about it and stopped about 30min in after the second part of the tutorial. I won’t be wishlisting this one.

Terra Invicta
I spent considerable time in this one but that’s because there is a shitton of reading. Their tutorial needs a lot of polish. I really thought about quitting and uninstalling after a few minutes because there was just too much garbage. It has “go to here” on just about every window, so I managed to skip the faction story because it closed the window. There’s also windows over windows and you can’t move the windows. It’s not intuitive which window you are supposed to be reading or whether you should be reading that menu yet. Many in-game events do not pop up windows after the first time, meaning you have to hover over the running events tab to find out one of your people got discovered. Lots of decimal values down to .0001 on items that have 2 significant digits. The tech tree is MASSIVE. yeah, bigger than that. It’s a spaghetti mess and I’m pretty sure I saw only a tiny portion. The good/bad news is that factions can’t be fully gotten rid of, just reduced in influence. I suppose you could help tech and go along for the ride if you wanted. TBH, it really feels like they stuffed too many systems into the game, which means it’s got a massive learning curve and a metric ton of reading. This feels like a specific audience game and I’m not a part of it.

Is the event over?
EDIT: looks like not, because there are plenty of demo game streams but I didnt receive any badge sadly

It ended on Monday but you can still try to get the badge.