Let’s establish this: dude bought himself a PS5 just to game with friends, so he’s seriously, not idly, wanting a build.

What he wants to run:

Anything else I can find out from him to pin down specifics lmk. Unlike me, he hasn’t specified RGB or shine. If I had to build again, I would get a motherboard more geared to Music Production with a rocking sound card. Live and learn.

IMHO, he would have been better off putting that PS5 budget towards the computer. If he seriously wants a smooth experience with modern AAA games (if wanting to play “modern” indie games, no need to specify), then he seriously needs a budget that will cover more than just the GPU.

In any case, the best game in town for planning this out will be https://pcpartpicker.com/ whether or not he knows what he’s doing. Just have him go to the builds page and he can pick out the best one he’s willing to afford. If he knows what he’s doing he can customize from there. Otherwise, he can just trust in the builds put together by people who are playing around with this sort of thing all the time.

Sorry, I had to. I am only half joking though. But this is lucky(?) timing because GPU prices have been dropping because the crypto miners are selling off their GPUs.

As always, it’s ebay. So be suspicious and paranoid with the sellers and the products. But I think your acquaintance will need to buy used for that budget.

Personally, I would wait a bit longer to see if the prices keep falling. Far lower than the MSRP for a used GPU.

For a budget like that? It’ll be very, very, very tough, especially since GPUs have not finished normalizing in price. $500 is the cost of any decent GPU right now, so it’ll take up that entire budget pretty much. I would seriously suggest your friend save up that money. Another $300 would make it a far, far better build.

Something like this is cheapish but won’t be absolute garbage.

If he’s strict on that $500, well, he could always check marketplaces online for used parts. The GPUs will be the hardest to come by, but he could potentially save some $ that way. However, I mean…it’s technically possible, but not advised at all. It would be like burning that money.

https://pcpartpicker.com/list/MJNm3y
(closest to $500 as possible. Again…very much so not advised, for many reasons.)

Here’s a quick difference between the above too, to show how much better it would be for him to save for better parts:

If he saves and buys then, his PC will also last far longer. He won’t see the terrible performance within the year, but a few years at most. His parts will last longer too, and will deliver better and more stable performances.

(if it helps to know: I have built over 30 PCs for family, friends and strangers across the internet and the few who decided to go for low budget, regretted it within a few months. However it goes, I wish your friend good luck!

500$ in current market is simply not enough for anything even half decent really.

Flight Simulator btw is ridiculously demanding title so even +1500$ machines struggle to run it ‘smoothly’.

I’d figure. That’s why he said he wants to run “everything”, I asked him to get a little more specific. So that thing is a beast, huh? Likely as much as a struggle as it is to run Maya, then pray for your CPU as it tries to render? XD

The GPU and decent power supply is ouch $ already, which he seems to kinda know, since he went looking a bit.

You all have been awesome and given him lots to munch on. O_o. Imma link him the thread and hope he can see if without registering to the site.

PS: I say acquaintance instead of friend, because I’ve gotten super burned by a ‘friend’ lately. My psyche refuses to process certain things right now.

Flight Simulator btw is ridiculously demanding title so even +1500$ machines struggle to run it ‘smoothly’.

Supposedly 30 fps is fine in flight sim… Though i would set the low bar at 40.

I’ll be honest I quit paying attention to this generation of cards when it was obvious getting one at msrp was a fool’s errand. Seems the times have changed and things are available now.

hope he can see if without registering to the site

Yes. He should be able to see it. He’ll just be blinded by the default white background.

Amd CPU. Intel AFAIK isn’t quite there yet.

As others have said, this is straight up not happening with any current AAA games. If he wants to play more indie titles he may be able to find a RTX 20 series on the cheap. Otherwise the minimum gpu basically the same cost as his budget.

If he also lives somewhere not well serviced, shipping will need to consideration as well.

I edited a suggested part list ’ amd modest gaming build ’ in pc partpicker so case,psu,mobo,storage is a default and i swapped cpu,gpu and ram but i doubt there is anything substantial to save on former.

Though i feel like GPU price is a bit ‘fake’ .

At least is a setup which would make sense in 2022.

Nice. It’s good to have a modest budget then go a bit further, than start with a big number and get carried away. And yea, a cheapish part would make think: sus.

Just a warning on the above build; the motherboard would need to be flashed to be used with that CPU. You could technically send it back to the manufacturer and ask them to do it, but that could cost money. Otherwise, you’d need to find a CPU that works on the board from the start, flash and then use the new CPU.

But as others stated, Flight Simulator is a very demanding game. I can barely run it (its like 40fps) and I have a pretty decent setup.

@Danacscott It is almost like Linus Sebastian was reading this thread 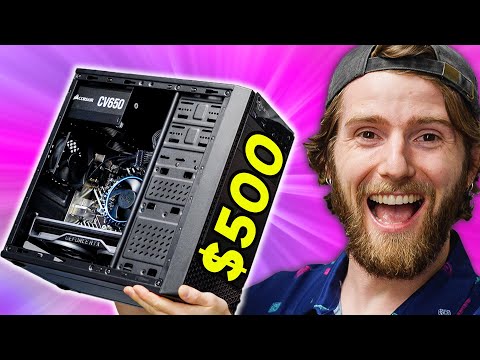 Far be it from me to criticize Linus, but from what I recall microATX sized components tend to be more expensive than full sized variants.

I think you are thinking of ITX.
Unsurprisingly, the LTT video glosses over a few key things such as getting items used, cost of the OS (12th Gen Intel is Win11 IIRC.), and tax (US market).

I would not be surprised if the actual price of the $500 USD computer was near $600.

Thanks my fluffy sloth and non-animals. I’ll alert the Simon to take a look at the video.

It can certainly do budget rigs, but it’s not recommended or even good. Linus even mentions it in the video. Just save. It is not worth dumping your money into something that will never be good.

Used parts are a great way to go though, how I get most of my desktop/server hardware. Also I hope no one is paying for their OS, plenty of ways to get one for free whether it’s Linux or Windows.

That i3 is a beast though for the price, just built my dad a PC using the f sku one. It keeps up with a 5600 in gaming, some games it actually does better, and really not far behind in cinebench scores. I would recommend not to go with the H610 though, spend a little more and get something like the MSI PRO B660M-A WIFI thats currently on sale. The only problem with the i3 are the board prices, 5600x at $175 now with cheaper boards is probably the better buy even though it is pretty close in both price and performance. 5600x/Mobo is only about $40 more than 12100f/mobo.

Can for sure hit around that $500 mark but would involve getting a used GPU, which doesn’t bother me but most probably prefer new.

The issue with going used for GPUs in today’s market, is that most of them have been used to mine and were exposed to extensive 24/7 use and may not come with warranties. I think the only ones that offer warranty over sells is EVGA.

And with prices normalizing more and more every day, there’s less of a reason to do it. I just saw the RX 6500 and the 6600 on Newegg for $300 and 3 months ago it was nearly $600. If one was to go used parts though, CPU and RAM are easily acquirable and very hard for people to break. Motherboards less so, but if you look over the board (if possible) for any blown capacitors or something, maybe it’d be fine.

That is true and the used market doesn’t always lower as fast as the new market but you can find some great deals. I would prefer to buy a mining card than a gamer one, usually take better care of them than some gamers do. Most of my gaming rigs are on 24/7 as well so no difference to me there. I have actually had more issues with used CPUs because people dont know how to protect pins for shipping and dang I hate fixing those lol. I was just giving a for sure way to get to that $500 mark and have a decent setup but if they can spend more than yeah for sure go new.

yeah for sure go new

I’m pretty going new would is thing, all other things considered. Hm. Will see if he’d increase his minimum budget for a better rig, since that Flight Simulator is the kicker.

I’m pretty going new would is thing, all other things considered.

I believe this is what it feels like to have a stroke.