Beware if you were thinking of buying a GT 1030 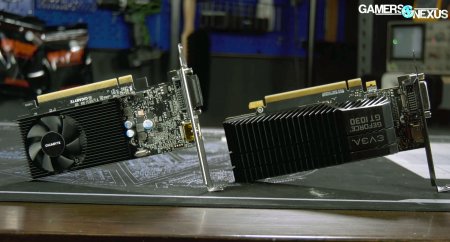 That is completely ludicrous, and nVidia, for a company so righteous on making “choices clearer for gamers,” sure seems to be obscuring this one. The company only wants some cards to be a clear choice. Not all. This does not benefit gamers. -

Just read this article, please be aware of this downgraded graphics card set up if you were thinking of buying one… Who knows, maybe because you might see if at a lower price compared to other similarly ranked cards… This is seemingly encroaching fraudulent marketing, in my opinion.

always double check the specs on hardware/sku before buying

Check thoroughly on the products you buy before you buy. This is why. However, not a lot of people understand these things, and it sucks for them when they buy products only to realize they are absolute garbage and were ripped off.

Shame on you Nvidia.

Although…I don’t that that these cards are really aimed at gamers (in the sense that system builders would be unlikely to use them in a gaming PC) but are more for media or streaming boxes. The change of memory is not a good thing, but I’m not sure it’s going to make that much difference in most use scenarios.

Yeah that was my thought on it at first glance. I’m not sure if this is Nvidia trying to “sneak” anything by anyone. It’s meant to be low grade card and the slower memory must be cheaper making it affordable for it’s intended use. It was never going to feature on any performance graphs either way.

On the second glance however it turns out this is an existing product that they’ve changed the production specs on without changing the name or marked them as a different product to what was produced previously, so that is a bit of a shitty thing. Also doesn’t look like the savings is passed down to the customer much either.

On the second glance however it turns out this is an existing product that they’ve changed the production specs on without changing the name or marked them as a different product to what was produced previously, so that is a bit of a shitty thing.

That was exactly why I thought it was almost fraudulent, to downgrade and keep the same name…

No almost about it. I’m not sure it’s even legal in most places to do this. If you notably change a product without making the customer aware of it that very much sounds like fraud to me. Even if the details on the box might differ and it actually says DDR4 memory on it somwhere.

I’ve sent a question in to our consumer protection agency to see what their thoughts on the matter is. I’ll let you know if/when I get an answer.

WHAT DO YOU TAKE ME FOR?

Got an answer already.
They claim that there is no illegality to it, as long as the packaging contains information about the new specs there’s no issues with selling a changed product under the same name. They cite examples of food stuff where recipes are changed, though I must say I’ve always seen such packaging with an extra decal ‘promoting’ the “Now new recipe” and I figured those were a requirement. I have a hard time seeing Nvidia putting a sticker on the new box saying “Now with even slower memory!”. They also cited cars, which I know nothing about so I can’t think of how to compare the two.

So as long as they or a retailer do not claim a card has GDDR5 when it actually has DDR4 there’s nothing fraudulent about it, apparently.

“Now with even slower memory!”

So as long as they or a retailer do not claim a card has GDDR5 when it actually has DDR4 there’s nothing fraudulent about it, apparently.

The problem is I think there’s a hope that people will see this on sale, do a quick search on the internet, get the specs of the old card, and buy impulsively, like me…

The problem is I think there’s a hope that people will see this on sale, do a quick search on the internet, get the specs of the old card, and buy impulsively, like me

Yeah that is my problem with it as well. But that is your responsibility to ensure you’re buying the right product. I don’t know if media outlets have any responsibility to withdraw or append their standing outdated reviews of a changed product though. They probably should, if not for integrity’s sake then in order to flip Nvidia off.

I just don’t see this as the impulsive purchase type product. It wasn’t high spec even before the memory change, and still pretty much does the job that most would purchase it for.

I just don’t see this as the impulsive purchase type product.

No, probably not an impulsive buy.

Probably ends up being a mainline product in not-really-for-gaming moderately priced home computer. Then the details can get glossed over and people thinking that they would be buying a better item without digging into the details.

still pretty much does the job that most would purchase it for.

True, but it still doesn’t sit right in my mind, no matter how many different angles I try to think this through.

But that is your responsibility to ensure you’re buying the right product.

Without a doubt, this is completely true. If I buy something incorrectly/by accident, then shame on me…

Such as the time I tried to buy a Steam card and thought I would list a purchase order for $0.05 and accidentally left out a 0… And the card shows up in my inventory 2 seconds later…

accidentally left out a 0

I would have been mortified if that had happened… Thankfully I lost about $0.30 only from that transaction… It was a lesson learned the hard way, but not too expensive…

I’ve lost probably 40-50$ that way over time (that’s the immediate “loss” which u immediately feel when buying the item; the real loss is much smaller, probably around 13-15% of that, as i’d resell the item later for more or less the same price, thus losing Steam’s cut); I’ve also accidentally clicked the “place order” button immediately thus buying the cheapest item on the market instead of putting the price i wanted to pay; that can make a big difference when buying cs go skins and stuff

would have been mortified if that had happened…

I did realize that… But it’s like a text or email that’s gone to the wrong person, you know, and it just can ever come back…

the real loss is much smaller, probably around 13-15% of that,

True…, I ended up with an expensive card filler for a badge, and didn’t want to deal with selling/etc… Just let it sit. If it had been a large amount of money involved, I am sure I would have done things differently.

By the way, I hope you are not anywhere close to being affected by Valve pulling anything tradable or marketable from CSGO and DOTA2 from any account in the Netherlands:

I wonder how much money/value some of these people lost, thousands of dollars I would imagine, and that’s probably not the worst…

I hope you are not … affected … Valve … Netherlands

i have been affected by some other site (it’s a known site for csgo/steam items but can’t remember its name right now) who told me to remove my items from their market cuz u can no longer sell them or something, and i cant get my stuff cuz my account has 2FA authentication and my phone stopped working and i now use some cheap old phone instead, and so i contacted support and asked them to send me a link through email or whatever so i can deactivate 2FA and proceed, but those monkeys insist i send them a picture of myself holding up my ID!!! That’s just insane, my account is linked to my email and my steam account but they just refuse to solve it any other way and im not sending then my picture and my ID wtf, so y whatever, it’s not a big amount lost anyway