Anyone watching Summer Games Done Quick?
If you don’t know what it is its a speedrunning event that lasts the whole week and donations toward it (which you can use to meet certain incentives) go to Medicine Sans Frontier.
I believe this site has been a sponsor for it in past years.

What games do you like watching getting speedrun?
For me I like the shorter ones that break the games in a fun way.

https://gamesdonequick.com/schedule
Here’s the schedule btw and it automatically converts for your time zone.

I love it every time, but unfortunately I’m unable to watch most of it this edition.

because they tend to lead to a lot of funny moments. Just saw today there’s Shadow Warrior Classic Redux run… I should tune in for that one. It’s an FPS done right

You know it’s just routine and repetitions… nothing more. If you put 50-100 hours in a shorter game you are set for a speedrunner

The true masters are behind the scenes though - the guys that manage to break the games and discover faster routes or exploits!

what i mean is, sometimes, beyond being impressive/skillful, it makes it sorta sad “how short” a game gets

X mario vs “a long game” for instance,
like, first time i watched a ds2 run, and it was below 20mins… couldn’t help but think it was a bit sorta sad to be “reduced to that”

or like Breath of the Wild, sorta just took something out of me from that game where i don’t look at it “entirely” the same/interest

That might be a bit soul crushing at times

That’s why one doesn’t watch speed runs of games he didn’t finished! When you try it yourself you kinda remove that fact from your brain though and you start only to appreciate the SRs. I was forced to learn how to do it number of games and probably the most worth mentioning is Dark Souls. I don’t want to use CE or Mule save files. I prefer to make my characters for PvP the “regular” way and when you want variety this means a lot of playthroughs and now it takes me like hour + to make a new build and it’s always good to remind myself of the bosses and the amazing sceneries from time to time

. First playthrough of the game should be around 50 hours and after that normal ones are like 20 hours… when I draw the line it’s bit scary you can do it for about 2 hours no probs and upgrade your gear and level up accordingly for PvP, but without this opportunity I would have probably stopped playing the game completely.

I don’t watch it live, but I go look at a lot of their videos for weeks on end after the event is over…

I prefer non-glitched 100% runs, but you don’t see a lot of them, because of the concentration and endurance needed for most games…

(I can stop and go back to a video as many times as I want, but I can’t imagine being a player trying to do that.)

I used to religiously, but nowadays I don’t even know when it’s on and watch a few speedruns on YouTube later on. If at all I watch runs of games I played back in the day or some of my current favorites to see how fast they can beat 'em.

I really rather enjoy watching glitch mastery though. Not the ones where they go into the menu, mess with some shit and end up on the final level off screen and suddenly trigger the credit roll some how. Those are usually just a few minute showcases though.
But the ones where they still skip notable parts by being really good at finding weird oddities in levels and code behaviour can be very entertaining. Especially if the runner is good at explaining what he’s doing.

watching a hollow knight glitch run i was like “holy f***, YOU CAN FLY!?!”

i’ve quite enjoyed some “dangerous” glitch run, the type where they say if it doesn’t go “just right”, the run is over because it then fcks things totally over,
like the mario glitch where you have to get out of bounds but can also get stuck outside the lvl “frame” instead,
seems like it’s at times “doubling” the impressiveness, because depending on a glitch, there is every bit/more timing+“precision” to it like the regular play too to make it happen.
-and that’s without even being “the guy” that’s the ones that figure all this sort of stuff and oddities out. I’ve always wondered how the heck they figure somethings out etc when they try to “break a game”

I do like Glitched runs as well, my favorites are the full game where I get to see what ungodly unobtainable items I managed to miss in my own gameplay.

As for the glitched runs, I am completely amused by the Uncharted skips, where the whole game is done in about 20 minutes… That game took me close to 20 hours to beat on Hard, with so many deaths, and some guy comes along and skips his way through to the end…

Not to mention the Pokemon glitched runs where it’s coordinating memory and menu inputs… that’s pretty cool to see once. After that, I like watching the races between two people trying to glitch their way to the end. Also I am super amused by the blind glitched runs too…

I like speedruns in general, especially runs that really goes to showcase the game and certain skill levels needed to play and really master a game.

I used to enjoy it but nowadays when you can’t even participate in the chat and the runners aren’t allowed any fun… I’d rather pass. There are better ways to watch runs.

Speedruns was what got me into Twitch. I often watch Acmlm speedrun Zelda: ALttP and romscout speedrunning Castlevanias. But I’m not really into watching the various runs that goes on GDQs, when I do, it’s to watch people I know. But sometimes give myself in and watch unknown folks playing games I enjoy, then stuff like this happens: 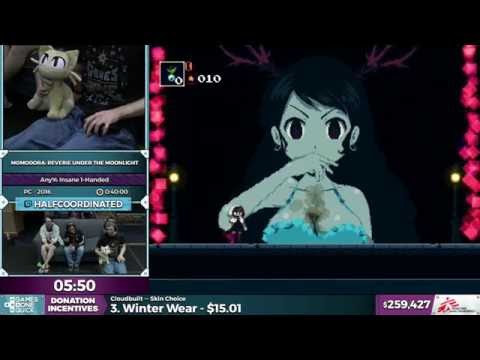 It’s amazing what he can do with his disability, he deserves all the respect. At that moment I shed a tear, his father donated at 30:23 and started the feels.

Yeah I like halfcoodinated, he has done many one handed speedruns over the years (I remember he did Neir Automata, Vanquish, a Transformers game and maybe one other) its really impressive what he does.

I used to enjoy it but nowadays when you can’t even participate in the chat and the runners aren’t allowed any fun… I’d rather pass. There are better ways to watch runs.

agreed the chat thing sucks, but I usually watched the youtube vids when they went out and to be honest with that amount of people watching you get a lot of trolls and not much interaction in chat. As for the runners not having fun I agree that they may have restricted it a little but I think they can still have a bit of fun. Like this run for example: 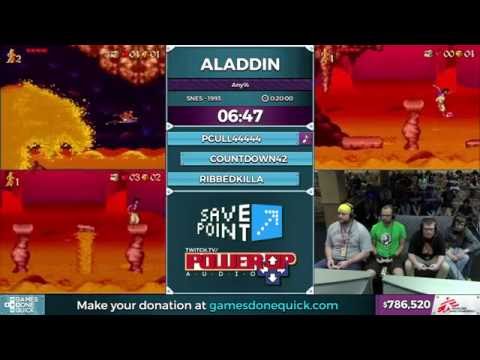 I just think you need the right personalities to make it fun and really what I like about watching the runs is the explanation of what they are doing, because I like to understand how they break things (I kind of do that for my job), how they found them and what the use of it is. If you watch a speedrunner on their personal channel they will likely not do this as they have run it so many times and expect their audience to know what’s going on as well.

GDQ is always fun to watch! I usually watch individual runs on Youtube because I have potato internet, though. Speedrunning is pretty fascinating to watch and I’ve discovered a few cool streamers from the event. The almost constant controversy surrounding the event bums me out sometimes, but seeing games completely destroyed all for the sake of speed is always entertaining!