My graduate research is coming to a close, and I am in a flurry of video analysis, colony collection and writing to get everything done in time for the end. But once all that is done, I still might have some time before I am going to be officially graduating, and I want to be doing something with that time.

So, I figure I would ask everyone here about things people have always wondered about ants, and if I can’t find the answer somewhere in the existing research, I might just do a short project and find the answer!

The restrictions (as I am not rolling in grant money):

Why do Ant Queens typically live vastly longer lives than those of the worker ants?

Please tell me more about the colony? How complex does it get?

Public questions are perfect, that way I don’t get asked the same question numerous times.

No need to apologize.

To give really vague rough outline answers to both those questions

@AcornAvenger The above description gives you a basic, rather vague idea about how the colony is structured. Somewhere in the nest the queen sits, surrounded by eggs that workers carry to wherever they are being cared for. But I haven’t even covered the food chambers

This is a fungus gardening ant, they are insane,
But if you are familiar with colony casing (which involves pouring molten aluminum into an ant nest to figure out what it looks like) you know that really any ant colony gets crazy:

Additionally, ant colonies can be in all sorts of crazy places not just below ground… Ants can be in trees (called arboreal), either living in the hollowed out spaces in twigs or, in the case of weaver ants, in tents made of leaves sewed together with silk made by the larvae.
There is an entire group of ants (Temnothorax sp.) where the colony lives inside a single acorn.

This doesn’t even cover the “special cases” in ants, like army ants that, at certain points in the year, built a living colony made from ants.

Every ant genus (and in some cases every species) is unique and incredibly complex. The sky is the limit for how complex it can get, especially when we start talking about ant colonies that are specialized to live inside other ant colonies, or even be parasites to fellow ants.

Quite the Entomologist you are!

is there anything that you personally find super cool about ants that has only been discovered in the past decade? (all my science books are from like the 1970s, and I’m curious what’s new in the world of ants)

Oh man… where to start, the last decade has been pretty crazy. 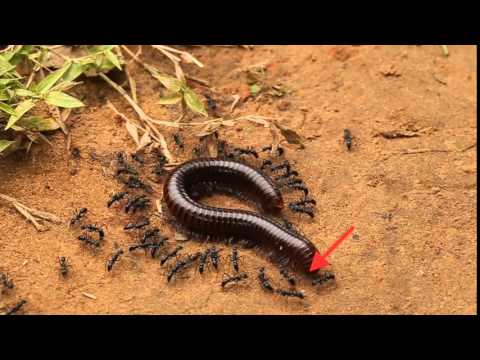 Not quite in the last decade (1986 close enough? I am going to at least link to it), but Mark Moffett’s description of the ‘Super major’ phenomenon in P. diversus was awesome.

Carebara diversa (common name East Indian harvesting ant), is a species of marauder ant widely distributed throughout Asia. C diversa is a eusocial insect and individuals have continuous allometric variation in size and morphology to facilitate task allocation and partitioning of work. Minor workers are between 1.3 and 2.5 mm in length, but major workers are much larger. Between the smallest minor and largest major workers there are many intermediate forms. The largest workers can have heads a...

The potential for developing “supersoldiers” has remained dormant in the ant genus Pheidole for at least 30 million years.

This is an indirect ant question - Given the limitations of discontinuous gas exchange why would anyone ever be afraid of a giant ant?

(I have a rough idea of the answer, but a little girl asked me this once, as is, and I want your take)

“How do tiny ants walk upside down? Do they wear glue on their feet?”

Ha ha! You have inadvertently asked me two questions that are closely related!

@coralinecastell and @xist your answers are closely related.

The bottom of an ant’s foot (and in fact most insect feet) looks like this:

Using this combination of hairs & the claws they can cling to irregularities in surfaces. Most methods of preventing ants from getting on surfaces covers those irregularities. But this means they put all their body weight on the little claws. So @xist as ants get bigger more and more weight has to go onto those claws. So as they get bigger, they take more and more weight, and eventually they will break. Don’t fear big insects. And most insects don’t have glue on the bottoms of their feet, they instead have lots and lots of hairs.

@Pylinaer that is a really hard question, but honestly I couldn’t tell you… I love a lot of ants… it is hard to pick just one.

how do I delete someone else’s picture?

how do I delete someone else’s picture?

I put a spoiler box for you

Is this based on a true story?

I have always wondered how the chemical communication thing worked, eg how they produce/detect the chemical and how they distinguish their own chemical from another colonies in terms of trails to food. Also how rudimentary/complex is this form of communication?

Also how rudimentary/complex is this form of communication?

Another question that, like the complexity of the nest, is really dependent on the ant species in question.

This question required the use of that incredibly useful tome: The Ants. The Ants - Wikipedia
If you intend to know things about ants, this is one of four books that you really must own (the other three being 2 other books by Hölldobler and Wilson, namely The superorganism and possibly Journey to the Ants (a much reduced version of The Ants), the third is a guide to the genera/species of ants found in your area of the world, though ideally this may require two or even three books to accomplish as regionally comprehensive ant guides are notoriously sparse).

Now to the answer:

Chemical communication is accomplished by the use of numerous chemicals. The ants has an entire chapter devoted to this topic, and I will attempt to summarize here. I will admit that I doubt my ability to accurately summarize 71 pages of dense literature into a single post, but I will try.

Some chemicals are simply on the body, and help an ant recognize which colony they are from. It is these specific chemical signals related to physical ant bodies that help them determine if they are from the same colony. Ants also produce chemicals when they die that workers use to recognize that something needs to be removed from the colony.

The chemicals I imagine you are most interested in are those used to lay down trails informing ants about where food can be found, when to attack intruders etc. These are called semiochemicals and pheromones. In some ants this chemical signaling is incredibly complex where the ants have an entire suite of special glands and secretions they can leave to create a wide variety of messages (glands of interest are the poision gland, Dufour’s gland, Pygidial gland, Sternal and Rectal glands plus mandibular glands and Cephalic glands, but not every ant has all of these, or even uses their excretions for communication. it gets really complex really fast). Other ants just have one or two glands, or don’t really leave chemical messages at all. Some ants just have more research done on them, carpenter ants and fire ants have a great deal of the messages ‘interpreted’ while some other species are basically assumed from our research on these more economically impactful groups. A tiny amount of a single pheromone has huge behavioral consequences for a colony and the specific ‘blend’ of pheromones elicits a specific response.

If you can find pictures of them Table 7-4 (a 2 page table of alarm pheromone compounds in different species) and 7-5 (a 2 page table of trail pheromone compounds in different species by genera) and 7-6 (a 1 page table of trail pheromones by type) will likely give you a good idea of the complexity involved here. Actually there are tons and tons of pictures in this chapter of The Ants, many of which are quite helpful to understanding what a specific ant uses to communicate, and how the brain/sensory system picks it up. @PeteMcc here is a link you may find useful, or just way to much info: http://www.antwiki.org/wiki/The_Ants_Chapter_7

As to the ability to discern signals ‘from the colony’ vs from others, think of these signals like a telegram, unless you recognize the number you can’t really tell the difference between senders. Often scientists can create signals in the lab by simply placing these chemicals where they want ants to go (there are some pretty interesting experiments that show that if you coat a living ant in those corpse recognizing chemicals, then other workers carry that ant off to the graveyard and will keep bringing them back when they leave). So if an ant encounters another colonies foraging trails out in the wild they might follow them like a normal foraging trail until they encounter another ant (assuming they don’t smell the new colony).

And I haven’t seen Antz, so I couldn’t tell you.

A special thank you to @PeteMcc because their question necessitated my linking to the antwiki summary of The Ants chapters, when I realized that some useful information might be found there to answer a few prior questions as well. (Think of this as optional reading if my answers prompt more questions). Although I linked to Chapter 7 in the post above, from there you can see any chapter in the ants. With a description of what is in it. I strongly advise skimming as some sections even have pictures!

Thanks for the answer. Very informative, I will have a look at the wiki link when i have some more time.

As someone currently living down under, are there anything like the honeypot ants you find here, and what makes their abdomens(?) be able to stretch like that? It seems so amazing that they can carry around all that “honey” and regurgitate it back out to the other ants in the colony on demand.