WHILE YOU WERE SLEEPING

So, I did it. As you know, I love Warhammer, especially 40K. I’m the Warhammer guy. I love the models, I love the games, I love buying my White Dwarf magazines, I love it all. And yet, I’ve gotten a bit behind because as you ALSO know, I was struck by a passing truck and slipped into a coma on September 19th 2004, one day before the release of my most anticipated game of the year, Dawn of War. That’s where I was up until one week ago at 9am, and with no new memories, like someone turning on a PC with Windows 3.1 in 2004, I immediately perked up and asked am I okay? Will I be able to make it in home in time to beat the postman to my house with my copy of Dawn of War?

Turns out, it’s been 16 years, and not only is Dawn of War out, there’s also a second Dawn of War, and each one has like a million DLC’s. I bought something on a website called Steam today that came with all that stuff for just thirty bucks, and it’s all I’ve really been doing since I’ve been back. I’m adjusting pretty well, not that much seems different since 2004. Apparently, a couple other weird things have happened in the world that I’ve asked my parents not to tell me about yet, I’m 34 now, and there’s even a Dawn of War III, but I don’t think I can handle any of that yet.

All my friends have turned into parents, movies have gotten way weirder, Dunkin Donuts are just called Dunkin, but after buy this franchise pack, I now have enough Dawn of War to play to make up for all the time I spent sleeping. I know not ALL of you are just coming out of comas, and I know I haven’t done much else yet, but trust me, this sale has been the craziest news yet by FAR.

Good RTS in 40k universe that has aged well. Campaign can definitely provide a challenge in higher difficulties.

This is a great game, despite it’s age. Still good, 10/10 would play again with a friend.

That’s… one hell of a sales pitch. Are you doing okay?

Also hells to the yeah regarding tabletop Warhammer. I’ve only recently been introduced to Battletech (I was somewhat young when everybody was playing war games) and I finally understand the urge to purchase your own frickin’ army. Warhammer is fantastic as well. Will probably pick this up.

I guess you could say I’ve been under a rock. There’s a ton of WarHammer stuff and I haven’t heard of half of it seems. Do have 2 titles, that of course, can’t run yet… hopefully next month, maybe.

Thats true as f*ck, theres a ton of games with the “warhammer” label, but the Dawn of war series are really worth, of course if you like rts

that trailer may be old, but it still gets your blood pumping…

In the grimdark future of 2.02k, father Nurgle has already claimed holy Terra. 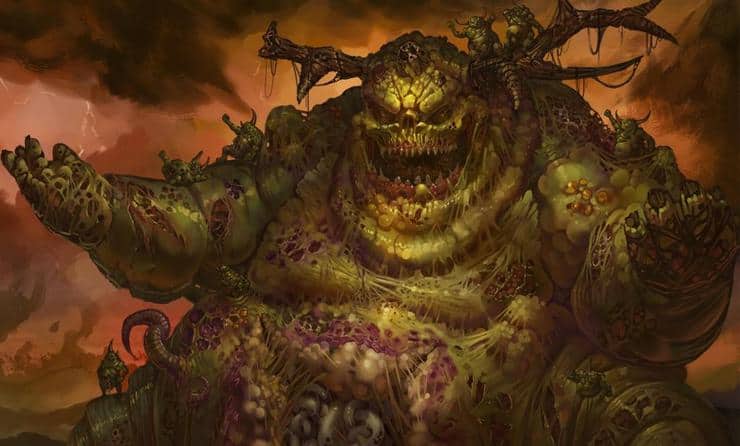 Since most people shitpost, I’ll comment that I love the original DoW series, one of the best RTS games there is. It was deeply disappointing to me that DoW 2 was basically a hack n slash where you click on things and something dies. I heard that DoW 3 is even worse. So, yeah, I’d advise you to skip it since all the DoW 1 games (both Dark Crusade and Soulstorm are standalone!) are on sales for really minor monies

I disagree with you.

I think DoW played it safe and released as a traditional RTS, nothing special but not bad. Then DoW2 and DoW3 actually innovated, blended genres, and became unique games, making them better — or at least stand out and memorable. I honestly can’t even remember the broad strokes of DoW, but DoW2/3 get me hyped enough to almost install an RTS again.

If your major complaint boils down to “hero units OP”, perhaps that was just a balance issue on standard DoW2 and we can crank the difficulty up, and DoW3 definitely tweaks that balance again on the harder modes so try it since you passed it over without giving it a chance.

The simple fact of the matter is that DoW 1 and DoW 2 are very different games and many people who really enjoyed one tend to not like the other. Neither is an objectively bad game. I have little experience with DoW 3 but it had a pretty lukewarm reception across the board as far as I’m aware.

Well, last year i discover this amazing universe, but i only played DoW 1 (i’m rts lover btw), yeah i heard that DoW 3 was a mess, but can’t judge a game without playing, currently i playing all the Dlc’s of DoW 1, after that i’m going to grab DoW 2