Unfortunately, my Dex is 8 (base level) which means I can’t really wield anything with any reach (I’ve just stuck with my starting equip, the mace). I intended to raise it to 10 at some point but I’ve just been plowing points into endurance and strength, with the odd point in faith…and obviously since I tend to hoard souls rather than spend them immediately (which is a terrible habit) I’ve missed quite a few opportunities to boost stats.

This is why I’m having the occasional bump…I have no ranged attack at all. No sorcery (Int at base of 8) and my Dex means no spears or bows.

And half a dragon explains things…I wondered what that was at the far end of the bridge!

Well, after a series of misadventures (boy do the enemies in Anor Londo all seem to have LOOOOOOOOOONG reaches, and hit quite hard) I’m wondering where to go next. Successfully resucitated the Firelink Shrine lady, seen a big weird snake thing and not sure what to do at this point. Maybe the glowing door thing in the Darkroot Garden? Maybe that big ladder in the Basin, maybe listen to what the onion knight from Catarina said and go “down below”, or perhaps go back to lava land.

One thing is for sure…I’m kind of regretting my build a bit, but hey, going to stick with it. No ranged attacks so far is kind of killing me (plus the mace is short!), and I’m really hoping that if/when I get some kind of ranged miracle attack it’s halfway decent. I’ve pumped a couple of points into Dex now (so it’s at 10) but seems I’m going to need a couple more, so I’ve either wasted two soul levels or I’m on a journey to a Dex of 12.

Perhaps a warrior-mage style build or maybe a funky dex build with one of those giant curved swords would have been a wiser choice.

I think the snake will have the answer to most of your questions.

Ornstein and Smough have definitely been the toughest challenge yet, and possibly harder than anything in Demon’s Souls, although I had a build I was happier with there. It’s funny how it made me totally change up my tactics. To start with I was just trying to chip away whilst maintaining a distance, but that ended up in death. In the end I worked out that I needed to maintain my proximity to them, taking out Ornstein really quickly. The problem then was Smough, as without any ranged attacks he was potentially deadly up close, especially the lightning area attack. I’d have loved to chip away at him safely, although with cautious running in and out he wasn’t so bad.

this is why I came here xD

I was expecting an eric chahi thread xD

good luck with darks souls! its fun and plays havoc on your reaction times, nothing will be the same you’ll be dodge rolling your taxes hoping you have enough Iframes.

The top bit of the Darkroot Garden so far ranks as my favourite area so far, and the ghosts in the ruins of New Londo (where I currently am) are far and away the most annoying thing I’ve encountered so far - they’re not even hard except for the fact that they ignore height, walls and swarm you. Most of the time I’m hitting walls getting stun locked as a result and dying in a hail of scythe-fire. Gritting teeth and pressing on…

Someone complete this sentence for me -

The Four Kings boss fight is fun because…

Because it’s really not. I’ve just beaten it which is why I’m posting this now, rather than moaning about it before I’d killed them, but it was just an annoying experience. The trek there involved a lift (elevator)…that’s already adding more annoyance than I need. That aside, taking up one of my ring slots just because was also irritating but manageable. And then the fight itself turned out to just be who can pummel the other to death fastest first. Ok…

So, dull, not fun and I’m glad it’s over. At least the Ornstein and Smough battle felt more tactical. This one did not impress me at all. Not sure where I’m off to next but may have to invest in the Iron Flesh pyromancy after that stupid battle of attrition.

I hated four kings. It was basically how quick can I kill them before I get crushed.

Also if you’re not liking the open world and lack of direction, to some extent DS2 and 3 both are more linear and easily followable in direction.

My issue with the open world is that, whilst dying has little to no real cost (most of the time…heaven only knows how many hundreds of thousands of souls I’ve lost being careless) the game offers so little in the way of helpful story prompts that I’m constantly wandering around testing out which is the right place I’m supposed to be in.

For instance I talked to the big snake guy with the altar - he tells me that eenie, meenie, minie and mo all have something to do with Gwyn who did something or other to do with fire and undead and I need to be the next Gwyn to fix things. That’s it. Oh, I also get a cut scene with some orange fog disappearing. On retalking to him he’s not helpful and the video doesn’t replay. I’ve already forgotten what that fmv showed and it’d be nice if the big guy gave me a little more direction…maybe where the big bad mo hangs out? I am making this harder on myself by playing in itty bitty sessions, so remembering details is tough, but still, how hard is it to have npc’s who are actually helpful?

I upgraded my mace last night after the four kings battle and probably won’t get to play again until wednesday. Still yet to decide which direction I should be going in…from what I recall there’s a direction in New Londo I haven’t properly explored and the lava place I ran away from before.

Yes the direction there is a little weak. The yellow barriers are supposed to give you an idea of new areas to go to, but if you had not seen those before or simply do not remember where they were it’s not easy to figure out without re-exploring the whole world. If you want to know where those are without risking any additional spoilers then let us know and we’ll point you in the right direction.

You’re going to die in the darkness of the Tomb of the Giants plenty more times. Sorry to hear about your face.

Tomb of Giants was so annoying…by the time I’d finished with it I realised from the loading info that I should have been using a skull lantern to help. So many fall deaths…And furthermore, I’m irritated about Patches. My build was essentially cleric, with faith and miracles, so when he asked “Are you a Cleric” I stated the obvious. Irritated that he went hostile and I had to put him down, so I lose a shop (yes I googled that once I’d killed him…annoyed that I can’t get the Cleric set now).

Gravelord Nito was somewhat irksome to start with, with unavoidable fall damage and ranged magic attacks that came from nowhere. However, he was barely a challenge to put down once the fight started, slow and shambling as he is.

Then back to the Demon Ruins. Lots of lava and some big monsters, but nothing too bad aside from the acid spewing worms that totally wrecked my equipment. Also, and for whatever reason, I found the Demon Firesage quite a challenge. He was nimble, in an enclosed space with a 360 fire/magic attack and really heavy blows. It took me an age to finally put me down, which quite frankly I feel embarassed about. The Lava Centipede fight that followed was a doddle in comparison again as it was easy to just avoid the ranged attack to start with and then get under/behind him.

Lost Izalith…again, an area that I didn’t feel was great. And with the length of time since Dark Souls’ release it’s unavoidable that I’d have heard about the frustrating Bed of Chaos…who died in two tries? Was expecting pain and it turned out to be simple???

Moving after taking a little more note of the loading screens I’ve hunted down the entrance to the Oolacile Township and just taken down Artorias. This town area is very reminiscent of Demon’s Souls and I really enjoy the environment, but it’s funny the Souls effect manifesting when you see an area with enemies just standing still, look at your Souls count sitting at around 100,000 and you think out loud…Nope!

So, next sessions sees me venturing further into these side areas before I return with my prize to, I assume, challenge Gwyn.

Kalameet slain, Manus scattered to the four winds and Gwyn extinguished. All bosses killed on my own without summoning. On balance, and please don’t hate me for this, I think I preferred Demon’s Souls. I felt that the plot was much better integrated and I actually understood what was going on, rather than having to go to the Wiki/youtube to work out what happened once I’d finished the game. Can’t work out who I’d nominate as the biggest challenge for me (boss wise)…maybe the Four Kings, maybe Ornstein and Smough…although as I mentioned before the Firesage Demon gave me more issues than I’m happy to admit. The Sanctuary Guardian felt pretty tough too because of how quick it was.

Great game on reflection though, and If I was to play again I’d probably go with a magic based build. Although, I’d be worried about damage output…my Cleric had a mace which scaled with one stat, and even though the range was quite short and recovery time for a one handed weapon a bit terrible it hit pretty hard, whereas a lot of the other weapons are split between two stats, muting their damage somewhat.

I bow down to anyone who can do a Soul Level 1 run though. Even though equipment upgrades make a far bigger impact than stats, I can’t imagine how tough it must be with no stamina, one hit kills and a paltry damage output.

I’m just about at the end of Dark Souls 3 myself, killed the last lord of cinder today so I think I’m all set to link the fire should I so desire. There’s the 2nd DLC left to venture into however so I’ll probably do that first.

Yeah, about that “paltry damage output”… 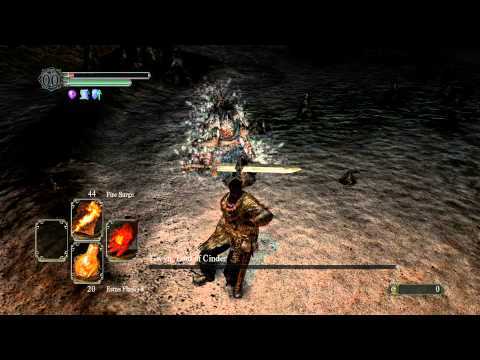 Power Within, proper damage boosting equipment and Fire Surge spam pretty much means you only need to avoid one or two hits and you’re golden. Not my video, but basically the same setup I used during my SL1 playtrough. And (ignoring the horrible lack of anti-aliasing) I looked fabulous spamming that Fire Surge!

I don’t know if I’m more impressed by the damage output or the super classy parry in that video!