/Waves @Nateninja21 Been missing ya…

Dune is definitely high on want to read list.

Just a head’s-up … The first time I started to read Dune (many many years ago), the opening pages confused me to the point that I almost quit reading the book, but I decided to keep reading and soon that opening scene made sense, and am I glad I continued!

Thank you for the reminder. I haven’t progressed very far in Dune or Stormlight due to my new job, but this just told me to go into overdrive. lol

I haven’t progressed very far in Dune or Stormlight

I don’t know if you intend to try reading both during the same period. When reading Dune, be sure to immerse yourself in that world…don’t start reading any other novel until you’ve finished Dune. You’re in for a treat.

Just finished The Hidden Oracle, and beginning the second book in the Trials of Apollo, The Dark Prophecy. All I can say about the Hidden Oracle is that it was a pretty interesting and unique read, but it radiates young adult themes.

@markwr
As for the 4th book in the StormLight archives coming out, I won’t be reading it until the 5th one comes out for optimal immersion in the series, although I do feel like I’ll be missing out by not reading it right away.

until the 5th one comes out

Thanks @Nateninja21 that’s actually an interesting strategy. I might try that.

I’m about to start the beloved And Then There Were None by Agatha Christie! I’m a huge murder mystery fan, I’m really excited to dive in. School has drained all my desire to read, but as we start wrapping up I find myself making time again.

Here are some Fantasy Books… 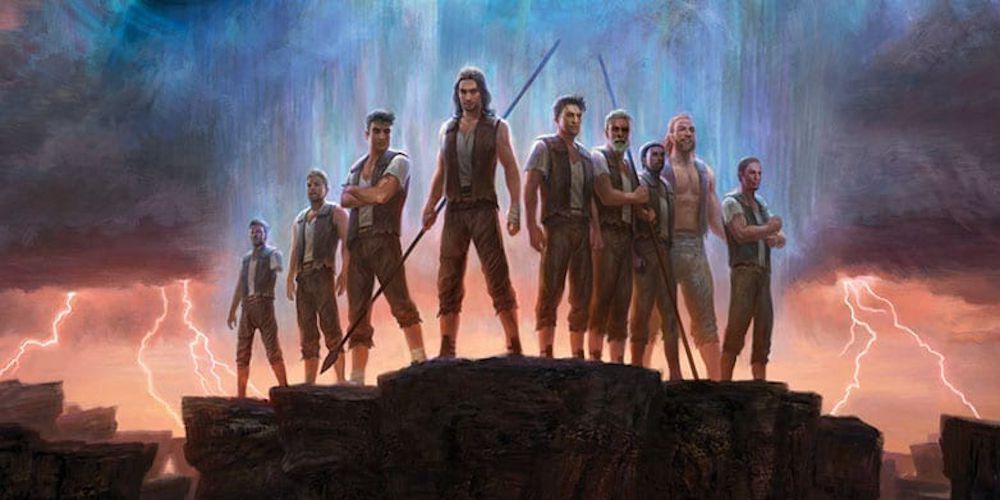 I’m passed part 1 of the Stormlight Archive’s first book (split into parts), and it’s really damn good. I’m using the audiobook, of course, but I imagine the life of it is even better on paper. So I would definitely recommend that one, too.

But Wheel of Time? Yes, yes…I suggest it much. Yes yes.

I am glad The Black Company by Glenn Cook was in there too.

fantasy book series that are way longer than mere trilogies!

You read my mind. This is the exact scenario I prefer. I’ll look at it tomorrow (so sleepy right now, I can barely keep my eyes open). The Chronicles of Thomas Covenant

Havent posted on this thread for a while and there is quite a bit I have read in that time so this will basically be a recap.
After finishing the Trials of Apollo series I decided to dip my toes in some classic Sci-Fi and read Snow Crash

BTW Snow Crash has one of the best covers i’ve seen on a book.

After Snow Crash I started reading Discoworld, more specifically the City Watch mini series contained within Discworld (mini series meaning 8 collective books) I made it to the 5th book in the mini series The Fifth Elephant. My opinion of the mini series as a whole is that its very Sherlock Holmesey, and sticks to that detective formula quite tightly. Personally I enjoyed the first book Guards Guards the most.
And as a tip to anyone who wants to start reading discworld I recommend watching Daniel Greenes Before you read video DISCWORLD: Before You Read! - YouTube

Now onto the series i’m reading currently The First Law trilogy. I’m not going to go in depth as to why I loved the first book The Blade Itself and am currently loving the 2nd book Before They Are Hanged because I think going into the series semi blind will make the experince better for any of you who want to read it. All I’ll say is that it is pretty grim dark, it has a brutal view on war and combat in general. Along with that it has some of the best characters I’ve seen in a book since The Stormlight Archives.
I gave the first book a 10/10 and will most likely do the same with the 2nd book when I finish it.

These books also have some nice covers.

Thats all that I’ve read in the time I’ve been inactive. But wait there’s more, in the beggining of this book thread some people flirted with the idea of a book club where some of us read the same book and talk about it, I would want to bring this back to the table and say that I would be down to do something like that if you guys are. Personally I think Stephen King might have some good books we could read, but honestly I’d be ok with whatever books you guys come up with. I need a palette cleanse from all the fantasy I’ve been reading anyways.

But wait there’s more, in the beggining of this book thread some people flirted with the idea of a book club where some of us read the same book and talk about it, I would want to bring this back to the table and say that I would be down to do something like that if you guys are.

I’m not sure I’ll be able to follow through with stuff like this (I mostly just listen to audiobooks and this makes me pretty slow) but as of now I’d like to suggest The First Law trilogy + Best Served Cold combo by Joe Abercrombie (read them a year ago). I do want to hear what other people think of those and share my opinion as well. Once Nateninja21 finishes them, of coz. And if anyone wants in as well - you can announce it and start reading, I guess

I have read those a few years ago and i just loved them
it is quite brutal which was unlike anything i have read before
the characters and the world are just great, i really liked the main protagonist

Just finished The Last Argument of Kings \o/ (actually about 26 days ago)
This trilogy might just be my favorite series I have read, currently tightly locked with Stormlight Archives.
The first 2 books are in my opinion masterpieces of grim dark, and a must read for anyone interested in grim dark. The 3rd just barely falls short of a 10/10, maybe closer to a 9.5/10.
But all in all the series is wonderfully brutal, and takes some risks that pay off incredibly! I give the series a 9.5/10
@Glider Cant wait to start Best Served Cold, the first 3 books left on quite a high note

In the 26 days i’ve been offline I also read The Emperors Soul which I finished the same day I got it. A true masterpiece only Brandon Sanderson could make.

And The Shining, which I found equally thirlling as horrifying, driven by spectacular writing, and perfectly flawed characters (the good kind of flawed.)

@Nateninja21
Yeah, I’m waiting for it as well. Reading Best served cold was… an interesting experience for me

Though there’s a good chance that our tastes differ quite a bit - I for example am not a fan of Brandon Sanderson. I’ve read 1st book of Mistborn series but I did not like it at all.

And The Shining, which I found equally thirlling as horrifying, driven by spectacular writing, and perfectly flawed characters (the good kind of flawed.)

It’s been eons since I read that…

I’ve got Dreamcatcher also by Stephen King on my shelf - looking at me. Eh heh. Just got done spring cleaning like in earnest. Maybe time to read, so tired.